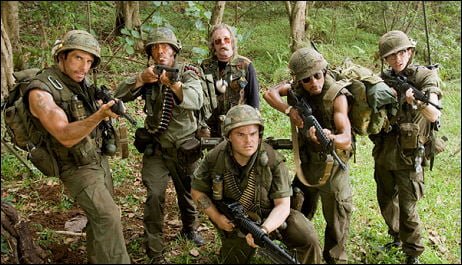 When a major Vietnam war film is about to be yanked out from under debuting director Damien Cockburn (Steve Coogan, "24 Hour Party People"), he's convinced by Four Leaf Tayback (Nick Nolte, "Affliction," "The Spiderwick Chronicles"), the disabled vet who wrote the book, to take his downsliding action star, Aussie academy darling and heroin-addicted comedian into the real jungle and film them covertly to get the realism needed for "Tropic Thunder."

Cowriter (with Justin Theroux and Etan Cohen)/director Ben Stiller's ("Zoolander") long gestating project arrives on screen in a blaze of comic glory. The much reported Robert Downey Jr.'s ("Iron Man") turn as a five-time Academy award winner Kirk Lazarus who undergoes skin pigmentation to play black sergeant Lincoln Osiris, is pitch perfect, but the film's secret weapon is Tom Cruise, whose vulgarian studio exec Les Grossman, another white man copping black man's turf, is simply outrageous, a true actor's invention. Stiller out Tarantinos Tarantino with his opening series of commercial and movie trailers which give us four of his lead characters's backgrounds. Alpa Chino's (Brandon T. Jackson, "Roll Bounce") Booty Sweat is a rapper's beverage sideline and hilarious take on hip hopper's habit of sampling, here with an veteran actor's identity itself (a theme which runs throughout - everyone is hiding behind an invented personality, even the non-actors). Tugg Speedman's (Ben Stiller, 2007's "The Heartbreak Kid") 'Scorcher' franchise has gone cold and his blatant Oscar bid, 'Simple Jack,' is one of the worst reviewed movies of all time. Jeff Portnoy (Jack Black, "School of Rock") is the druggie star of 'The Fatties' franchise, a white version of Eddie Murphy's Klump family that capitalizes on the fart joke. Pronouncing 'Five Time Academy Award Winner" Lazarus costarring with MTV's Best Kiss Winner Tobey Maguire in 'Satan's Alley,' that movie-trailer voice is all seriousness in proclaiming 'Satan's Alley,' a medieval homosexual monk story, a story of a love that must be hidden. You'll be in stitches before the movie proper even starts. That would be as Speedman is trying to keep Lazarus from stealing his thunder during his big, climatic scene, a Platoon poster moment capped with hilariously gory effects. Cockburn's so overwhelmed trying to manage his pampered stars that he's not paying attention as fx obsessive Cody (Danny McBride, "Pineapple Express") is setting up a showstopping explosion budgeted at four million. In a videoconference, Cockburn (gotta love these names!) gets torn a new one by Les Grossman, the studio exec who has the respect to let the hook-handed Tayback say his piece before telling him to shut up and f himself. Once the guys are in the jungle (the fifth is Kevin Sandusky (Jay Baruchel, "Million Dollar Baby," "Knocked Up"), a tentative newcomer), their director vanishes in such a spectacular way, his whereabouts are debated by Speedman, now hell bent on accomplishing Cockburn's vision, and Lazarus, who thinks they're not in Kansas anymore. Sure enough, a gang of Malaysian heroin processors ID them as DEA agents, although they're awestruck by Speedman's bravado. Nevertheless, they capture him and it's up to his colleagues (which include a separate team of Cody and Tayback) to save him. Back in L.A., Speedman's agent (Matthew McConaughey, "Fool's Gold," taking over from Owen Wilson) is still trying to right his client's Tivo situation when Grossman, who's rejected outright a $50 million ransom demand from Flaming Dragon, offers him a G5 buyout to cut his client loose, with finality. Ben Stiller's comedy runs deep in "Tropic Thunder," from its multiple film references to its Hollywood machinations and pecking orders to its fundamental theme of public faces masking hidden identities. Tugg alone does not recognize that he is no longer his image of himself, yet 'finds' himself when forced to perform as 'Simple Jack' for his captors (a later mano a mano conversation has Kirk informing him, using real life examples, that he did the unthinkable by 'going full retard'). Stiller is best trying to convey pain on the battlefield, a caricature Speedman would think high emoting. Portnoy's red carpet antics hide the fact that he's a spiraling addict, Chino's macho image is his own denial of a love that dare not speak its name, Tayback himself is a fake and Grossman thinks he's a 'playa' (Cruise's dance moves must be seen to be believed and the closing credits are devoted to them). In most spectacular fashion - an ironic bid for an Oscar nomination perhaps? - Lazarus sheds his blackface via layers of other performances before 'becoming' himself - a bleached blond with blue contact lenses. Bill Hader ("Pineapple Express") is that most fake of Hollywood execs, the yes man, while McConaughey, radiating a genuine sweetness in a surprisingly effective turn, is playing a career that subverts itself in favor of the client. Stiller's lone misstep is with the character of Tran (Brandon Soo Hoo). Unveiling the heroin honcho as a mere child isn't funny in and of itself and is given no subtext. Better is Tugg's 'adoption' of another child he dubs 'Half Squat,' a jab at Hollywood philanthropy in the guise of global parenthood. "Tropic Thunder" works on so many levels, its screenplay should be seriously considered at year's end. This is a big summer action comedy that actually makes you think.