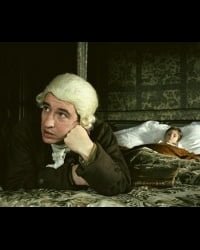 In the mid-eighteenth century, Laurence Sterne published nine volumes of a most unusual type of fictional biography. His titular narrator took several chapters before relating his own birth and was nigh on incapable of maintaining a linear narrative, going off on tangents, unable to get his arms around his own life. Jump to the present day and a group of filmmakers are taking the same tortured route towards filming the unfilmable, complete with two lead actors each trying to gain control as the narrator. One man knows what they're all up against, a literary scholar portraying Parson Yorick in the film (Stephen Fry, "The Hitchhiker's Guide to the Galaxy," "Mirrormask"), who slyly observes that this is "Tristram Shandy: A Cock and Bull Story."

Director Michael Winterbottom ("In This World," "Code 46") and screenwriter Frank Cottrell Boyce (credited as Martin Hardy, "24 Hour Party People" and "Millions") take that hoariest of independent movie cliches - the film about making a film - and twist it on its ear by adapting one of the most acclaimed masterpieces of literature that the least number of people have read. 'It was post-modern before there was a modern to be post about,' the actor Steve Coogan ("24 Hour Party People"), who plays both Tristram and his father Walter, tells the camera (although it will become abundantly and comically clear that the star has not read the book either). The film begins with bickering in the makeup trailer before Coogan, in costume as Walter, leads us to the set in full film featurette mode, describing the production he stars in. Tristram Shandy was a gentleman whose father tried to meticulously plan his conception, birth and life and failed uproariously three times. Coogan uses the night shoot of a battle he is uninvolved with to flirt with the script girl, Jennie (Naomie Harris, "28 Days Later"), who shares a name with the mother of his child, Jenny (Kelly Macdonald, "Finding Neverland," "The Girl in the Café"), waiting back in his hotel room. When the battle footage screened isn't up to standard, the director (Jeremy Northam, "Gosford Park," "Bobby Jones: Stroke of Genius") must battle the producers for additional funding as the writer (Ian Hart, "Finding Neverland, " "Breakfast on Pluto") weighs the option of replacing it altogether with the previously excised Widow Wadman (Gillian Anderson, "The House of Mirth") love story, a move which pleases Coogan no end until he learns that the romance belongs to Uncle Toby (Coogan's shocked ignorance washes all over his face as the writer proclaims Toby 'the heart and soul of the piece'). Hollywood is sent up hilariously when a telephone call to Gillian's agent finds the actress not only present in the office, but able and willing to board a flight to London the next day. Director Winterbottom and writer Frank Cottrell Boyce, who removed his name from the film as psychological split from his old boss, have created a boisterous film that gives equal shrift to the novel's fancies (filming the infamous black page is briefly discussed) and low budget filmmaking, yet its very nature causes its many funny scenes to never quite add up to a satisfying whole. Characters seem to come into the film, then leave at random (witness Anderson, brought in with a bang only to fade away), or never fully come into focus. The stylistic devices of the book are visually represented with split screens, side-swipes and closing irises and the 'film within a film's' score borrows from the likes of "8 1/2," even sounding in sections as if lifted from old prints. Once again, as he did in Jim Jarmusch's "Coffee and Cigarettes" short with Alfred Molina and as he has as Alan Patridge on the BBC, Coogan offers up his notoriously vain, self-centered and somewhat clueless alter-ego, the Cartman of actors as it were. During the course of "Tristram Shandy," Coogan will deliver the film's wittiest put down ('pub ceiling'), inadvertently hand over more screen time to his costar, be birthed from a 'womb with a view' and suffer a parallel to Shandy's boyhood 'sash' incident (penis mishaps being a family speciality) when he's unable to perform sexually with his set-visiting girlfriend. And amusing as Coogan's brand of self-aware satire is, it is indeed his costar, Rob Brydon ("24 Hour Party People," "Mirrormask"), portraying Tristram's uncle Captain Toby Shandy, who just about makes off with the film. Brydon's manipulations are almost imperceptible because he is the surface opposite of the man he shadows (and yet can impersonate wickedly). Watch the relish Brydon applies in his featurette segment, informing the audience that 'Steve's hero is Roger Moore,' with all that fact's attendant baggage hanging in the air. In addition to those previously mentioned, the film's support also includes such notables as Shirley Henderson ("Harry Potter and the Goblet of Fire") as Tristram's mother's (Keeley Hawes, "The Avengers") lady's maid, "Shaun of the Dead's" Dylan Moran as the forceps-challenged Dr. Slop and, in the tiny role of the Curate, "Little Britain's" David Walliams. While one doesn't necessarily have to have read the novel to enjoy "Tristram Shandy" (I had'nt), it helps to have an idea of its concept. But I cannot imagine getting into this film with no foreknowledge of both the novel and Steve Coogan. Winterbottom's film simply depends too much on parallels to the former's structure and the exclusive imprint of the latter's celebrity.

The classic piece of English literature, The Life and Opinions of Tristram Shandy, Gentleman by Laurence Sterne, has always been considered unadaptable for film. But, that hasn’t stopped director Michael Winterbottom from trying his hand at it with “Tristram Shandy: A Cock and Bull Story.” Actor Steve Coogan (“24 Hour Party People,” also directed by Winterbottom) stars in this film-within-a-film as both himself and the title character. The story jumps back and forth between the making of “A Cock and Bull Story” and a look behind the scenes as the film is being made. As such, there is a lot of movie in-joke stuff that the cast and crew must have loved but left me feeling the outsider. We get a sense of the difficulty in adapting the source material as the filmmakers, on a shoestring budget, attempt to stage the involved story of the life of Shandy. Elaborate costumes, realistic makeup and big battle scenes are problematic for actors and crew alike. These trials and tribulations, though, are met with typical British stiff upper lip humor as the director and stars enjoy the closed social life their careers afford them. Even though money is tight, everyone lives it up, eating and drinking with abandon. These are the real 24 Hour Party People. The cast is a who’s who of Brit TV so most of the actors won’t be known here in America. Steve Coogan may be the headline star of “Tristam Shandy” but it is Rob Brydon, as Coogan’s costar, who steals the show. His self-effacing wit, comic chemistry and spot on imitation of Coogan make his performance a delight. The rest of the cast appear to be having a good time, especially Yank Gillian Anderson who gives a good-natured performance as herself when she is offered, at the last minute, a role in the movie. The overseas call to her agent’s office, where Anderson just so happens to be, is priceless in its amusing improbability. Winterbottom and company do a convincing job of depicting a movie about making a movie. I think they all had more fun than the viewing audience. Given that, “Tristram Shandy: A Cock and Bull Story” is an amusing toss off that is full of tongue-in-cheek British humor for the film buffs.