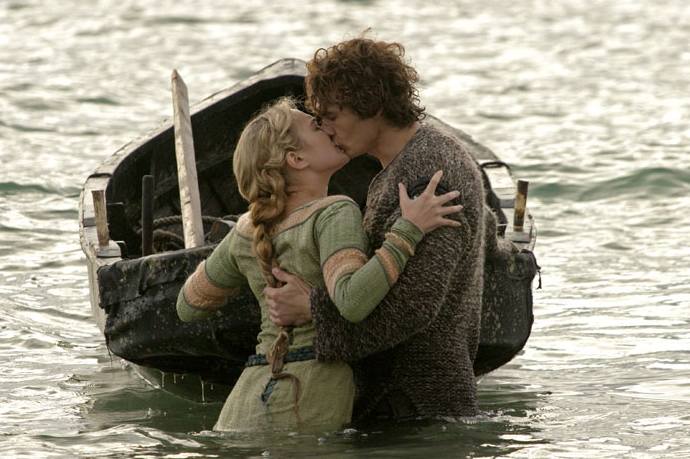 It’s King Arthur meets Romeo and Juliet in a story set during the Dark Ages about an English prince who falls in love with an Irish princess. But, the star-crossed lovers must face separation and war in “Tristan and Isolde.”

The Roman Empire has fallen and its colony, England, is divided among warring clans. The Irish, united and unconquered by Rome, make raids at will on the English mainland. The British clan leaders realize that they can either join forces or subjugate themselves to Irish King Donnchadh (David O’Hara) and their strongest of the leaders, Lord Marke (Rufus Sewell), wants to head that coalition. Tristan (James Fanco), as a boy after a bloody battle where the Irish raiders claimed his father’s life, was taken in and raised by Lord Marke. Marke treats the young man as son, advisor and confidante and Tristan grows into a formidable warrior. That is, until he leads a raid against the invading Irish and is slashed by the poisoned blade of the Irish raiders’ chieftain. Thought to be dead, Tristan’s comrades give him a Viking funeral and launch his burning boat into the Irish Sea. Beautiful Princess Isolde, fearing an arranged political marriage by her father, King Donnchadh, is set to run away when she finds Tristan’s body washed ashore on a remote Irish beach. Isolde is well versed in medicines and, finding a shred of life still left in the castaway, nurses Tristan back to health – with the pair falling in love in the process. When Donnchadh sends his men to scour the land for English infiltrators, Isolde pleads with Tristan to save himself. Tristan, in a stolen boat, escapes back to England. During Tristan’s long, isolated recuperation, Marke has solidified his role as leader of the English clans and is in the process of forming a treaty with King Donnchadh. The Irish king includes Isolde’s hand as a part of the treaty and Tristan is shocked to learn that his beloved is now his lord’s wife. But, although Isolde belongs to another, the two cannot stay apart and a secret, passionate romance begins again. Meanwhile, the Irish harbor a secret of their own – an invasion to overthrow of Marke and the other clan leaders. Political intrigue, betrayal, bloody battles and passionate romance are the cornerstones for “Tristan and Isolde.” Director Kevin Reynolds does a yeoman’s job in creating a well-crafted film but one that does not draw the viewer in emotionally. He leads a competent cast and crew that do a convincing job in creating the gritty reality of the Dark Ages with its the violent battles and fledgling political development following the fall of the Roman Empire and the vacuum that created. Costume, production design and lensing are ably handled. Dean Georgaris’s script doesn’t do much more than provide a thumbnail sketch of historical events. It runs, battle, romance, battle, romance, battle, betrayal, battle, romance, until it wraps up its version of the romantic legend. Don’t expect a recreation of Richard Wagner’s bombastic operatic version of the tale. James Franco, as the titular Tristan, gives a stern performance but doesn’t really provide the passion that the character needs to make him fully rounded. Sophia Myles, on the other hand, is wonderful as the strong-willed, educated and impassioned Princess Isolde. Myles is a real find and makes her character into a genuine human being and a fine role model for young girls to boot. This is an excellent calling card for the young actress that should garner bigger and better roles. The only “name” actor in the supporting cast is Rupert Sewell as Lord Marke, not exactly a household moniker. The rest of the cast of unknowns (to me, at least) does competent acting work without any (except Lucy Russell as Isolde’s loyal and brave maid, Edyth) giving a performance of real note. Tristan and Isolde” tries to be both love story and tale of political intrigue and war. I think it is trying to be both chick flick and machismo movie. I’m not sure it does either well enough but it is a showcase for Sophia Myles.