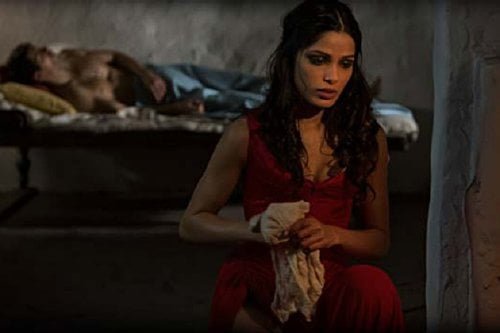 When Jay (Riz Ahmed, "Four Lions"), the privileged son of a developer comes to Rajasthan with friends to see a temple, he meets a villager who works at one of his father's hotels as a maid at a party. When her father loses his livelihood in an accident, Jay comes to the rescue, procuring her a job at another family hotel in Jaipur. Jay keeps intervening in her life, sweeping her away to modern Bombay to be his live-in girlfriend in a glamorous life, but Jay never offers to marry "Trishna."

Eclectic British writer/director Michael Winterbottom ("The Trip") got the idea for a modern day retelling of 'Tess of the d'Urbervilles' shooting "Code 46" in Rajasthan when the differences between that area and modern Mumbai struck him as similar to the industrial revolution backgrounding Hardy's nineteenth century novel. It's an innovative viewpoint for remaking the story and the exotic settings are stunning to look at, but the character of Jay as interpreted is problematic as is the last act. Still, Freida Pinto ("Slumdog Millionaire"), who to date has not impressed me as an actress, is quietly compelling here, a real tragic heroine. Trishna travels to Jaipur with money considerately sent by Jay and spends her first two weeks caring for the exotic birds Jay's father so loves. She learns to whistle. She calls Jay 'Sir' and he acts like a gentleman towards her, but Winterbottom's camera lets us know he has trouble taking his eyes off her. Jay's father (Roshan Seth, "My Beautiful Launderette") arrives and we are surprised to discover he is blind and that this is why Jay taught Trishna to whistle to his birds. The elder man is taken with her too, but we learn there is a conflict between his plans for his son and Jay's ideas. One night Trishna walks home from a wedding she has attended in the city and begins to be harassed by a group of men. In swoops Jay on his motorcycle to rescue her just at the right moment. He stops in a secluded spot, tells her she is beautiful and kisses her. That night in her room she cries and the next morning she steals away, back to her family. Her father is disappointed at the loss of income, then more so when he learns he must procure a doctor to terminate a pregnancy. Against her wishes, he sends her to work in her uncle's factory. But once again Jay swoops in to rescue her, having tracked her down by going to her family home. He offers to take her with him to Bombay and she accepts. Life in Bombay is glamorous. Jay is becoming a producer and Trishna indulges her love of dance at classes where Avit (Aakash Dahiya), a film dance coordinator, notes her talent, but Jay tells their friends that she only wants to dance for him. It's not so clear that this is what Trishna wants, but she is demure and submissive, a girl with an old fashioned upbringing. Then Jay gets a call that his father has had a stroke and he needs to leave for London. The night before he confides in Trisha that he slept with a couple of women in Bombay before he found her but that now he intends to bring back an heirloom necklace for the 'girl that he loves.' In the spirit of confidence, Trisha finally tells him about her pregnancy and abortion. Jay goes cold. He doesn't contact her while he is away and a leasing agent tells her she must vacate their apartment as the owner is returning. But Avid takes her with him onto a film set and encourages her to get her cine dance card, even offering to loan her the money. Then Jay returns, finds her, apologizes for what happened in the interim and tells her he must return to manage a hotel in Rajasthan and that she can go with him but their relationship cannot be out in the open there. There is no necklace. She agrees and their positions revert to those of Jaipur with one major difference. Jay is no longer the gentleman courter. He now treats Trishna like a sex slave, a receptacle for his boredom and dashed plans. And this behavior of Jay's is the film's major problem, because we have witnessed Jay's empathy for Trishna's situation before he even knew her. He clearly understands the cultural differences between her world and his, so why is the abortion such an affront (all he says about the matter is that it was 'a big deal' and that she should have told him) that he loses respect for her? Furthermore, Trishna was fully capable of extricating herself from a bad situation with Jay once before. This time she does something entirely different that also makes little sense, especially given her contacts back in Mumbai. These story flaws keep "Trishna" from fully taking hold. But Pinto is really showcased here and her quiet goodness makes her later exploitation heartbreaking. Winterbottom also gives us an Indian travelogue much more realistic and varied than anything seen in "The Best Exotic Marigold Hotel." "Trishna" is an intriguing concept only partially realized, but Pinto and the setting are engaging enough.