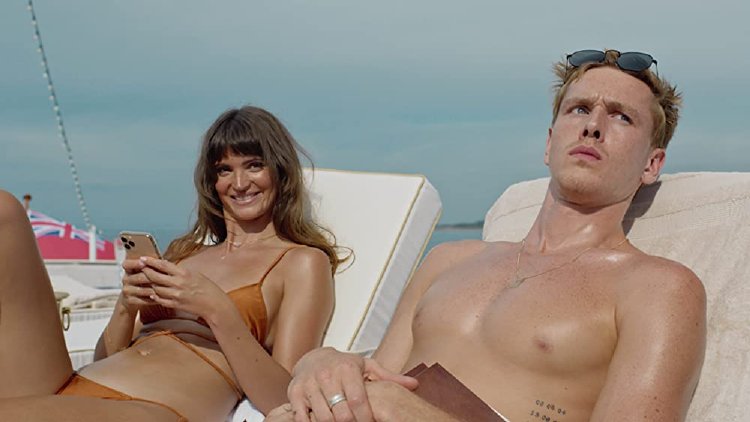 After clashing over gender clichéd power dynamics, fashion model Carl (Harris Dickinson, "See How They Run") and his fashion model/influencer girlfriend Yaya (the late Charlbi Dean) take a free luxury yacht cruise along with obscenely wealthy passengers which plunges them into a class divide, which itself is upended when they are stranded on a remote island and find them switching roles in a “Triangle of Sadness.”

Writer/director Ruben Östlund ("The Square") won his second Palme d’Or from a Cannes jury somehow charmed by an excess of vomit and liquid feces jokes in a satire that shoots fish in a barrel.  That is not to say the film isn’t funny, but it is divided into three acts, the second of which goes overboard and the third of which simply runs out of steam.  The film plays like a mash-up of Lina Wertmüller's "Swept Away" and Michael Winterbottom's "Greed" by way of ‘Gilligan’s Island.’

Part One, ‘Carl and Yaya,’ begins with Carl suffering the indignities of a pretentious fashion spread audition which wraps with he and other male models being instructed that cheaper brands like H&M are ‘smiley’ while couture is ‘grumpy.’  After losing his front row seat at a runway show featuring Yaya, imperious handlers demanding he and others make way for late arriving VIPs, the couple head to a pricy restaurant to celebrate, the much more highly paid Yaya having offered to treat, then studiously ignoring the check.  We learn her ambition is to be a trophy wife.

In Part Two aboard the yacht, Carl helps Yaya snap pictures and gets disgruntled when she is overly friendly with a bare-chested crew member.  Carl complains to chief steward Paula (Vicki Berlin), only to observe the man being taken off the ship shortly thereafter.  He seems not to mind when Yaya and another woman indulge a billionaire software guy (Henrik Dorsin) at the bar, a man who, without the money, would likely be an incel (genuine flirtation bad, opportunistic flirtation good).  Meanwhile, in the film’s most barbed and well written scene, Vera (Sunnyi Melles, "The Baader Meinhof Complex"), the wife of Russian fertilizer magnate Dimitry (Zlatko Buric, the "Pusher" trilogy), makes crew member Alicia (Alicia Eriksson) uncomfortable demanding she join her in the pool as they should all be equal.   After a miscommunication between Paula, who can only reach the Captain (Woody Harrelson) through a closed cabin door from which the sound of rolling bottles emanates, the Captain’s Dinner is scheduled for the only bad weather day of the sailing week.  One after another traveler succumbs to seasickness, projectile vomiting when not targeting champagne buckets.  Power goes out and the Captain and Dmitry play a game of one upmanship trading favored Marxist (the Captain) and Capitalist (the Russian) quotes over the ship’s PA system.  The cute little elderly couple, Clementine (Amanda Walker, "28 Weeks Later") and Winston (Oliver Ford Davies), who’ve made their fortune on landmines and hand grenades, catch one of the latter thrown onto the ship’s deck by Somali pirates delivering us into Part Three.

Survivors on the island include Carl and Yaya, Dmitry (who removes the jewelry from his wife’s corpse when she washes ashore), the tech entrepreneur and the wheelchair bound Therese (Iris Berben, "Eddie the Eagle") who inexplicably screams ‘in den wolken’ (in the clouds) at regular intervals.  Paula orders toilet cleaner Abigail (Dolly De Leon, "Aswang") to unload supplies from a covered life ‘pod.’  But Abigail, who is the only one among them who knows how to fish and make a fire, has other ideas and is soon enjoying that pod’s comforts along with Carl while Yaya obsequiously commends her overturning of the patriarchy.

There are laughs to be had here, for sure, but once an innocent donkey is bludgeoned they dry up quickly.  The sprawling ensemble all depict their various stereotypes well, Dickinson assuming a deer-in-the-headlights innocence assuring Carl some sympathy, De Leon ruthlessly transforming Abigail.  As it is two women, Paula and Abigail, who appear to be the only capable people among this group, one could commend the filmmaker for a feminist stance, but in the end his film projects no hope for humanity.  “Triangle of Sadness,” which indicates the facial space between eyebrows and top of nose prone to creasing, is a vomitorium of despair.

Carl (Harris Dickinson) and Yaya (Charlbi Dean) are two wannabe model superstars who are vapid and without original thought. Still, they get an invite for a private cruise on a super yacht catering to the rich and entitled. But, that cruise goes terribly wrong with a giant storm, a drunken captain, food poisoning, a ship without a helmsman and pirates in “Triangle of Sadness.”

One thing I got out of “Triangle of Sadness” is that the more things change, the more they, ultimately, remain the same... Unfortunately for me, it took director-writer Ruben Ostlund two and a half hours to make that point.

The story, as it is, is divided into three parts. Part one follows Carl and Yaya through a modeling audition and a dinner at a swanky restaurant that ends in bickering. Part Two is on the super yacht with the very wealthy, like a Russian fertilizer magnet and a sweet elderly American couple who own a multi-national arms corporation, and the poor hired workers below deck who cater to the rich.

This part ends abruptly when terrorist pirates seize the ship and a big explosion ensues. Part Three begins on a deserted island and the survivors must unite and work together to survive. But, this part also makes its scathing indictment against entitlement and excessive wealth and promotes a pro-merit system of society that develops when the old class structure ceases to exist. However, the brave new world will shatter when “civilization” rears its ugly head and things resume the careful balance between the gots and the nots.

The pending disaster is telegraphed early on with storm warnings and a drunken captain (Woody Harrelson) who refuses to come out of his cabin. Then, there is the captain’s dinner, a ship out of control during a violent storm and food poisoning with its ensuing vomit fest. Never mind when the pirates attack and the ship explodes. That is a lot of “stuff” and then we add class struggle.

Writer-director Ostlund packs a lot of stories into “Triangle” and his scattershot kitchen sink movie has plenty going on. But, it is too much and, while there are highlights – like the captain and the fertilizer mogul discuss Marxism versus capitalism – it is over long and too skewered in its storytelling.

Neon releases "Triangle of Sadness" in select theaters on 10/7/22.