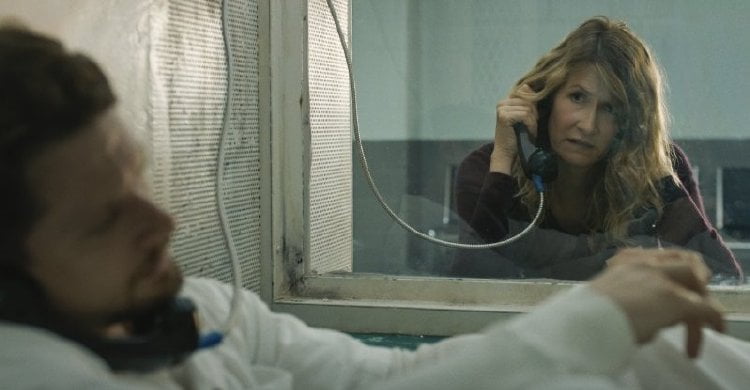 Cameron Todd Willingham (Jack O’Connell) had a bad rep as a troublemaker and petty thief in the small Texas town of Corsicana. So, when a flash fire in the home kills his three little girls, arson is found to be the cause and Todd is arrested for first-degree murder. Despite his pleas of innocence he is sentenced to death in a “Trial by Fire.”

Two days before Christmas in 1992 Corsicana, Texas, a woman watched her distraught neighbor cry out that his babies were burning up, his small ranch home ablaze. She watched him break a window to try and reenter, flames shooting out, before running to call 911. ‘Sicko,’ judges a local fire inspector (Carlos Gómez) walking through the aftermath when he views an Iron Maiden poster hanging on a wall, quickly determining that an accelerant was poured in the shape of a pentagram in a children’s bedroom. Cameron Todd Willingham (Jack O’Connell, “Starred Up,” “Unbroken”) isn’t even given time to grieve the loss of his three little girls when he faces a “Trial by Fire.” David Grann’s titular 2009 New Yorker article is a horrific and depressing read about the economic inequality of the American justice system and the fallibility of the death sentence. Although it’s been goosed with dramatic license which proves unnecessary overkill by “Precious” screenwriter Geoffrey Fletcher, director Edward Zwick’s (“Glory,” “Pawn Sacrifice”) adaptation is the most powerful anti-death penalty film since 1995’s “Dead Man Walking.” Willingham was a known trouble maker in a small town. His relationship with his wife Stacy (Emily Meade, HBO’s ‘The Deuce’ and O’Connell’s “Money Monster” costar) was the rocky sort spurred by unemployment and alcohol, but the love was real, especially for toddler Amber and two younger twins. But once Todd is pulled over driving away from the funeral and placed in handcuffs, the state of Texas has already made up its mind, despite Stacy’s passionate witness testimony. Todd’s appointed defense attorney Horton (Darren Pettie) can’t be bothered to challenge testimonial conflicts that a movie audience can see clearly. A psychologist climbs aboard the Satanic panic train. That witnessing neighbor’s story is radically different in court and Todd’s initial cellmate Johnny Webb (Blake Lewis), a drug addict, tells tales of a confession. Todd is found guilty of murder and sentenced to death. Like “Dead Man Walking,” the focus of Zwick’s film is on a relationship that forms between the prisoner and a woman from an entirely different background. Elizabeth Gilbert (Laura Dern) is a divorced mother of two college bound teens from Houston, a woman known as a do-gooder who learns about the Texas Coalition to End the Death Penalty and decides to write to a man on death row. At this point, Todd’s been in prison for years, has been working on bettering himself and has attained a new lawyer, Walter Reaves (David Wilson Barnes). Todd’s polite and appreciative response prompts Liz to go and visit him. Convinced of his genuine love for his lost kids, Liz begins to stir up the embers of his case, reinvigorating Reaves. The two are thrilled when fire forensics specialist Jerry Hurst (Jeff Perry) agrees to analyze the evidence, coming to an entirely different and decidedly more accurate conclusion. Applying an understated Texas drawl, English actor O’Connell slips right into the skin of the small town, beer guzzling, heavy metal listening, muscle car driving ruffian, the type most would give wide berth to. And even before he softens Todd’s approach, O’Connell folds all those traits into a devoted dad whose love for his kids we never question. Dern offers solid support, her middle class mom a distinct contrast, but it is O’Connell who sucks us in. Also strong is ‘The Deuce’s’ Chris Coy as prison guard Daniels, a local who falls in with the crowd condemning Todd until the prisoner’s words and actions force him to reconsider. Coy’s character transforms from tormentor to supporter. McKinley Belcher III plays Daniels’ opposite, the death row neighbor Todd wants nothing to do with until the man’s wise and warm words coax a strong friendship. As Liz’s kids, Wayne Pére and Jade Pettyjohn’s characters are too thinly drawn, the latter flipping from disapproving to supportive of her mother’s cause for no apparent reason. The production ably defines small town, prison and suburban life on location in Georgia. The fire depicted in the film’s opening is terrifyingly realistic. Zwick and his cinematographer punctuate their film with shots of a long hallway, the execution chamber looming at its end, a psychological device which keep the stakes front and center (John Oliver’s recent piece on the cruelty of lethal injection will intensify the horror for those who follow his HBO show). Hurst’s damning report which conclusively stated that the Willingham fire was not arson was delivered to Governor Rick Perry (now Trump’s Secretary of Energy) in a last ditch effort to save an innocent man. He never bothered to read it or even acknowledge it. Hurst’s conclusions have since also been the conclusion of a Texas commission, which condemned the trial’s findings as unscientific folklore. “Trial by Fire” is a scorching condemnation of a barbaric practice and a system which dispenses justice to those able to pay for it. Grade:

At first, comparison between “Dead Man Walking (1995)” and “Trial by Fire” seems obvious, on the surface. But, Jack Connelly, as Todd Willingham, makes the latter film his own in a tout de force performance that forces you really question the guilt or innocence of the man – and the morality of the death penalty. He embodies Todd with depth of character and, yes, he is a ne’er-do-well with a violent streak but his love and grief for his daughters is palpable. I can see why comparison to the 1995 film is inevitable. But, director Edward Zwick travels in a different direction in his handling of the death penalty drama. Here, in “Trial by Fire,” we deal with a dilemma: is Todd guilty or, as he professes throughout, is an innocent man being put to death? This is where Elizabeth Gilbert (Laura Dern), a teacher and author and advocate, comes into the picture at about the halfway mark. This is also when the comparison to “Dead Man Walking” comes into the discussion – think surrogate Sister Helen Prejean. Comparison aside, Zwick and screenwriter Geoffrey S. Fletcher adapt the New Yorker article, Trial by Fire, by David Grann and create a character study of a man who, by all the evidence and witness accounts of the tragic fire, is guilty of murdering his three “babies.” As Todd’s fate unfolds, following the blaze, and his continued pleas of innocence, the viewer, at least this one, can decide guilt or innocence. Elizabeth Gilbert’s entry into “Trial by Fire” seems almost an add-on to Willingham’s story but this is likely because so much time and attention is given to Todd, you want to stick with his story. Gilbert’s efforts to overturn Todd’s conviction – she points out the very miscarriages of justice that I picked up on watching the film – are shown with heartfelt care and Laura Dern embodies her character’s zeal in her search for moral and real justice. Director Zwick and company, with this well-crafted true-life indictment against the death penalty, make a strong stand against it. There is a line in the film when capital punishment is brought up, one DR inmate says “If you ain’t got the capital, you get the punishment.” That says it all.