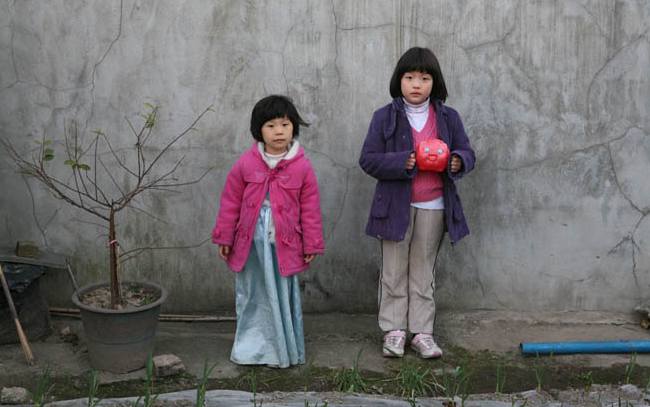 Six year-old Jin (Hee-yeon Kim) has been given the responsibility of looking out for her younger sister Bin (Song-hee Kim) by their mother (Soo-ah Lee), but she has trouble accomplishing the task. She's still at the bed-wetting stage herself. But when mom tells Jin she is going to look for their father and leaves Jin and Bin with her own older sister, Big Aunt (Mi-hyang Kim), Bin is all Jin has got and so she keeps her by her side as they make daily trips to view the bus stop where they last saw their mother from a "Treeless Mountain."

Writer/director So Yong Kim ("In Between Days") returned to Korea, her country of birth, to make this poignant tale of one little girl bearing the weight of the world on her shoulders. Along with her cinematographer Anne Misawa, So Yong Kim has an expert ability to bring her audience inside her protagonist's point of view and, without histrionics, convey the terror of abandonment. The director wastes no time establishing Jin and Bin as latchkey kids, expected to shoulder more responsibility than their years can support. Mother is an almost alien creature, tired and harried, but one who can convey comfort, as she does when Jin awakens her in the middle of the night with a wet bed. But mom offers little in the way of comfort (except in the running dialogue she seems to have with herself) as she transports the girls to her sister's, leaving them with a plastic piggy bank and a promise to return when it is full. Life with Big Aunt is scary. The woman is an alcoholic who passes out without having fed them and who thinks nothing of sending little Bin out on an errand by herself. Panicked, Jin goes to find Bin, and meets Hyun, the little Downs Syndrome boy she has begun to play with. Hyun's mother brings the girls in for milk and cookies, but Jin is reluctant to open up. When Jin cannot find anything for them to eat in Big Aunt's kitchen, she remembers having seen a little boy skewer and grill grasshoppers and so, not only do they eat, but Jin embarks on a cottage industry, selling the treats to fill that piggy bank. Big Aunt tires of her irresponsible responsibility, however, and trundles the two girls off to her elderly parents' farm, where they are not welcomed. But something happens in the country and the girls begin to flourish in the natural setting and with their grandmother, who patiently includes them in her chores. When the girls notice that their grandmother has a hole in her shoe, they proudly present her with gift that is telling in its selflessness. So Yong Kim has coaxed incredible performances from her inexperienced cast, particularly young Hee-yeon Kim, who the camera never leaves. With the camera close on Kim's face, we seem able to read her unspoken thoughts. Closeups convey the concentration of Jin and Bin's actions - Bin's misadventure in a fish market opens a dazzling new world, Jin's handling of her grasshopper 'business,' where one false move has dire consequences. These activities are conducted to the exclusion of all external influences. Also outstanding is how the director is able to create a moat between the children's world and that of the urban adults (also, notably, sisters), which disappears once the kids are out of the city and placed with an elderly caretaker. The urban adults are unknowable enigmas to these small girls, but grandmother is someone they can relate to. And yet, while the girls appear happy at the film's conclusion, one must consider the sudden absence of formal education and wonder if they are now destined to follow in the footsteps of mother and Big Aunt. So Yong Kim's quiet film which takes its time observing the minutiae of every day life has an undercurrent of grander themes at play. "Treeless Mountain" is the work of an assured filmmaker willing to take risks that have reaped her great rewards.

Six-year old Jin (Hee-yeon Kim) and her little sister Bin (Song-hee Kim) must take care of each other when their mother leaves them to search of her estranged husband, the girls’ father. She deposits them with her alcoholic sister-in-law and the youngsters depend on each other to survive the emotional pains of the separation from their mom in “Treeless Mountain.” Sophomore helmer-writer So Yong Kim creates a beautifully rendered story about two little girls left to care for each other when their mother (Soo-ah Lee) abandons them to find her missing husband. Though left with their aunt, who the kids call Big Aunt (Mi-Hyang Kim), they have to fend for each other. Mom, before she left, gave the girls a piggy bank, telling them that when it is full, she will return. This becomes a quest for the girls as they do all they can to make the promise come true. This lovely, evocative story takes place in three parts. Part one, the shortest, shows Jin and Bin’s life with their mom before she makes her single-minded decision to leave. Part two follows the girls after they are left in Big Aunt’s careless care and is shown through their eyes. The mostly faceless adults around do not have much interaction with the two but their authority is all encompassing. The last part brings Jin and Bin to the small farm owned by their grandparents. This is the most idyllic chapter in their young lives but also represents the loss of such important things as getting a proper education. Although the minimal budget is obvious in this little production, the director’s deft hand overcomes this limitation with an oft-charming story and studied eye of lenser Anne Misawa. The overall use of close-up and two shots is intermittently augmented by lushly photographed views of the larger world around Jin and Bin. “Treeless Mountain” requires the commitment by the viewer to get involved in the lives of the little girls. But, for the real film buff, this is a true labor of love and worth the effort.