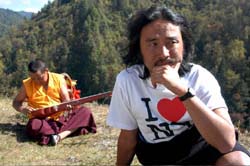 Dondup (Tshewang Dendup) is a minor government functionary sent to work a tiny village on the outskirts of the mountainous Himalayan country of Bhutan. Absorbed by all things Western, especially American, he longs to migrate to the United States. When a long awaited letter from a friend arrives, filled with promises of visas and passage to America, he tells his boss that he must attend a distant religious festival and heads off to find freedom in the US. But, he is in for some startling surprises in Travelers and Magicians.”

Bhutan-born Khyentse Norbu came to international cinematic fame for his 1999 film, “The Cup.” Now, he takes his cameras and crew home to his native Himalayan land and, with an international crew, makes the first film, ever, in Bhutan – which was the backdrop for the story in the great Frank Capra classic, “Lost Horizon (1937),” about the discovery of the mythical paradise of Shangri-La. Norbu, utilizing non-actors that come from many walks of Bhutan life - the chief regulator of the country’s banking and financial institutions, a colonel in the King’s Bodyguard, a monk trained in pure mathematics, a senior researcher with the government strategic planning think tank, employees of the local TV broadcasting corporation, a school principal, school children, farmers and local gomchen (householder practitioners and meditators) - tells a pair of stories, one nested nicely within the other. As Dondup hastily prepares for his impromptu race for freedom he dons his Nike trainers and an “I Love New York” T-shirt and rushes off to his destiny with just two days to get to his port of embarkation to the good life. But this is the boondocks of Bhutan and, when he misses the infrequent bus, must hunker down the wait for another ride. The self-absorbed Dondup nervously paces and smokes as an old apple vendor (Ap Dochu) joins him. When his chance for a ride is thwarted – the old man had too much baggage with his apple-laden basket – he moves up the road, hoping to get a ride alone. A musical Buddhist monk (Sonam Kinga) arrives on the scene only to be rebuffed by Dondup. Unperturbed, the mirthful holy man joins the old seller and settles down for a night along the road where, he shouts to Dondup, “there are ghosts…at night.” Dondup returns to the fold and the little group of travelers is soon joined by a paper maker (Dasho Adab Sangye) and his beautiful daughter, Sonam (Sonam Lhamo). Together, they seek transport to the capital, Thimbu. To relieve the boredom and entertain the travelers waiting for a lift, the monk begins to tell a tale about an earlier time when schools for magicians abounded. Tashi (Lhakpa Dorji) is a daydreamer who, as the eldest son in the family, is given the “privilege” of attending magician school – a privilege he would rather forgo for the chance to see the world. His younger brother, Karma (Namgay Dorjee), aspires to be the magi of the clan and slips his brother a psychedelic concoction that takes the free-spirited would-be magician on a journey of discovery that parallels Dondup’s modern day travail. Writer-director Norbu very deftly weaves between his the two tales, one steeped in the present day world of Dondup and the other taking on the mystical flavors of Tashi’s universe. Norbu moves with skill between the two stories and tells each in a compelling way that makes the viewer disappointed when auteur Norbu shifts from one story to the other. But, each yarn is so richly depicted and told you soon fall back into the charms of each. The helmer and his veteran crew from around the world do a brilliant job showing the beauty and mystery of the magnificent Bhutan locales. Alan Kozlowski brings an artistic eye to the lensing of the film that complement the vivid colors of costume in the Buddhist country. That Norbu elicits believable and fully developed characters out of his cast of non-actors is all the more impressive. The writer-director may well spawn a Bhutan-based film industry that could be the new New Wave.