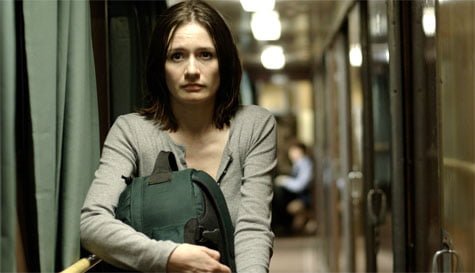 It is time for Roy (Woody Harrelson) and Jessie (Emily Mortimer) to leave their Chinese church mission and head back home to the US. Roy, an avid locomotive buff, convinces Jessie that, instead of flying, they take the train all the way to Moscow and, hence, home. This choice, however, will become fraught with danger after they are warned that they can trust no one on the “Transsiberian.”

Relatively new bride Jessie (Emily Mortimer, "Lars and the Real Girl"), having accompanied her husband Roy's (Woody Harrelson, "No Country for Old Men," "Semi-Pro") church group for humanitarian work in China, indulges his fascination with trains and agrees to make the first leg of a long journey home on the "Transsiberian." Cowriter (with Will Conroy)/director Brad Anderson ("Session 9," "The Machinist") continues with themes of guilt and secrets in his latest, albeit in the form of a Hitchcockian train thriller. Three couples, the train enthusiast and wife, a backpacking Spaniard and young American girl, and a Russian detective and his side man, cross paths in the cramped train and vast Siberian wilderness in a series of escalating and unexpected events. "Transsiberian" is stunningly shot (cinematography by Xavi Giménez, "Intacto," "The Machinist") and, with the exception of one inscrutable accent, well acted. Roy and Jessie seem quite happy, with midwestern Roy, the typical open American, enjoying his train and the more inward Jessie finding numerous subjects for her photography hobby. Roy chides Jessie for her smoking, which she claims as her only, necessary vice. The brusque treatment of Russian train attendants and Chinese officials with guard dogs is intimidating, but makes the couple giggle in shared experience. At a stop, they discover their compartment will be shared with roommates Carlos (Eduardo Noriega, "The Devil's Backbone," "Vantage Point"), a charismatic Spaniard, and the quieter, heavily eyelined Abby (Kate Mara, "We Are Marshall," "Shooter"), a younger American. Jessie is taken aback by the couple's open lovemaking, but Roy gets on like wildfire with Carlos in the drinking car, where shots are tossed back (Jessie adamantly refuses to take part) and a "Jaws"-like game of battle scar one upmanship ensues. The next day, at a stop, Roy walks with Carlos and confesses to marital trouble while Jessie separately tells Abby about her troubled, alcoholic past. When the train starts rolling again, Jessie discovers Ray is not on it. She's terrified, but Carlos assures her Ray will meet up again if they disembark at the next stop and wait. He also shows her, alone in their compartment, the treasures he is carrying to sell in Amsterdam, a suitcase of Russian nesting dolls. Jessie senses Abby is agitated and becomes protective of her. As Carlos's behavior towards Jessie begins to cross lines, Anderson deftly begins to build a sense of mounting dread, thanks in part to Noriega's ability to mix the seductive with the sinister. Released from the confines of the train, the white expanse of Siberia seems less like liberation than a leap into a white abyss. As Jessie, Mortimer makes us complicit with her increasingly panicked reactions, her dark past nothing compared to her whiteout present. The story takes wild twists and turns in its midsection, so that when Roy is reintroduced safe and sound for the third act, he is all blustery cheerfulness while his wife is sliding down a slippery slope. Carlos and Abby are replaced by Grinko (Ben Kingsley, "The Wackness," "Elegy," sporting a dubious accent), a Russian detective we saw investigating a brutal murder scene in the film's opening scene, and his less gregarious sidekick Kolzak (Thomas Kretschmann, "The Pianist," "King Kong"). Grinko detects something amiss with Jessie's retelling of recent events. And so while the film's third act is more predictable, the violence and action take it to yet another level. The relative complacency and comradeship of strangers in a strange land turns into dark secrets and lies (and more) before turning into a fight for survival. Even within the final act's relative predictability, Anderson has a surprise or two up his sleeve. The film's only real weak point is a couple of nagging continuity issues. "Transsiberian" is a character study of a morally conflicted woman who is both damned and redeemed by her actions (the film ends like an inverse of "A Simple Plan"). It's also a crackerjack thriller indebted to its exotic, wintery locales.

Brad Anderson shows his chops with this Hitchcockian thriller that twists and turns its way across the Russian steppes. Using cinematographer Xiva Gimenez’s talented eye, “Transsiberian” is a deft combination of tight, claustrophobic shots within the bowels of the speeding express train and magnificent open vistas of central Asia’s starkly beautiful landscape. However, the film is not just about good cinematic looks. Anderson, with co-writer Will Conroy, constructs an intricate suspense drama that begins idyllically enough as Roy and Jessie board the title train heading for Moscow. They face a language barrier, though, especially with the gruff officials they meet during their transit. One kind passenger tells them to be careful and trust no one, especially the police. His limping gate, as he walks away, punctuates his warning. Jesse is awakened the next morning with the arrival of their sleeper cabin mates, Carlos (Eduardo Noriega) and Abby (Kate Mara), a couple whose back story, teaching English in Japan, does not sit quite right. As the two couples journey continues we learn that Jesse had quite a past with she confiding in Abby and boy-like Roy spilling his gusts to Carlos. The dynamics of the travelers’ relationships change, ending in a tale of murder, intrigue, suspicion and guilt. I will leave it to the viewer to watch this well-done thriller unfold for themselves. Anderson assembles a solid cast of actors with Emily Mortimer getting the lion’s share of character development as the enigmatic Jessie. Woody Harrelson uses that innocent persona that he first brought forth in the TV series, “Cheers.” As Roy, he is enamored with all things to do with railroads. When he and Jessie are separated in the middle of Russia, his only concern is for the neat vintage locomotives he had the chance to see. Jessie, meanwhile, is plunged into frantic worry. Eduardo Noriega gives a swarthy, quasi-sinister turn as Carlos, a man who is not as he seems, by a long shot. Kate Mara has a weathered waif-like air as Carlos’s partner (in crime?). Ben Kingsley, as Russian narcotics detective Illya Grinko, has an odd accent but still conveys depth to his character ­ is he one of the cops Roy and Jessie were warned about or is he a good guy? The rest of the large, native cast gives the film verisimilitude. The combination of good directing, writing, acting and film-craft make for a dramatic thriller (or dramatic thriller, if you want) that keeps you on the edge of your seat. The scope of “Transsiberian” transcends Anderson’s previous (good) works, “Next Stop Wonderland” and the creepy “Session 9.” It is an evolving step for the filmmaker and