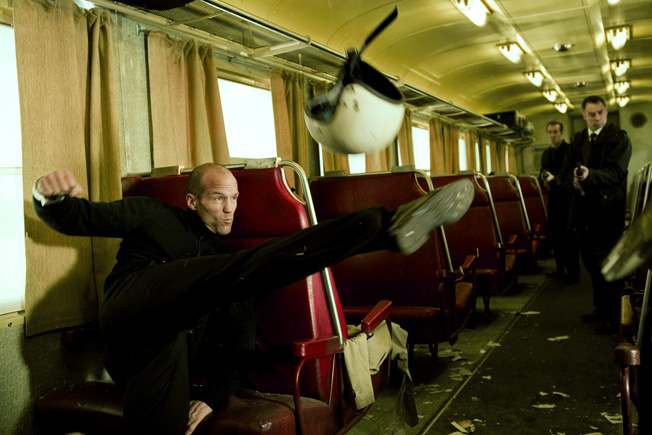 Former special ops agent Frank Martin (Jason Statham, "The Transporter," "The Bank Job") enjoys his retirement fishing with his former nemesis, Marseilles Police Inspector Tarconi (François Berléand, "The Transporter," "Tell No One"), but when the man he recommended for the latest underground transport job ends up driving into his living room with a Ukrainian babe passed out in his back seat, Frank is back in the game against his will, tied to his sleek black car with an explosive bracelet in "Transporter 3."

Jason Statham broke out of B action movies this year with "The Bank Job," but he doesn't forget who gave him his start. Producer/cowriter (with Robert Mark Kamen) Luc Besson ("La Femme Nikita," "The Transporter") has hired the aptly named director Olivier Megaton for this third installment about the man who transports without asking questions or peeking at his cargo and this time Frank's been given a female to tussle with. As a first timer to the series, I was impressed with the fighting skills of the star, moves that are executed like a more serious Jackie Chan, and so I discover that the first film's director and the trilogy's choreographer is Cory Yuen, a Jet Li/Jackie chan vet. Megaton sets his film up fast and furiously, cutting between the fishing pair and a man in a sleek black car trying to bypass port customs. When Tarconi gets the call, he notes that he is in the presence of the only suspect. Meanwhile Ukrainian EPA minister Leonid Vasilev (Jeroen Krabbé, "Crossing Delancey," "Deuce Bigalow: European Gigolo") is being pressured to sign an agreement to allow nine ships a year into his port - ships that are carrying the type of dangerous industrial waste he is crusading against. Later that night, as Frank relaxes in his home, that black vehicle comes crashing into his living room. Malcom Manville (David Atrakch) had nowhere else to turn, but it is only after his friend has been loaded into an ambulance that Frank discovers a woman in the back seat mumbling 'don't leave the car.' Frank cannot stop the explosion which rips the emergency vehicle apart and when he comes to himself, discovers he has been outfitted with a metallic cuff. Johnson (Robert Knepper, "Prison Break's" T-Bag) informs him his referenced colleague hadn't been satisfactory and that he must now make the transport - without straying more than 75 ft. from the car. Valentina (Natalya Rudakova) is an added extra, a passenger he does not want who will not explain how she came to be with the previous transporter. Frank takes off on a journey that will take him from Marseilles to Munich and Budapest before his final destination, a man being tracked by three different agencies. "Transporter 3" is a Europudding action film that's actually quite entertaining. It's not built upon an original idea, but it has some fun performances (Statham, Berléand), great stunts (Martin taking out a group using suit jacket, tie and dress shirt) and spicy flourishes (Frank finally getting Valentine to talk by describing her favorite meal in each city they approach). The car chase action is done in real time (has anyone tilted a car between two trucks since Bond?) and vehicle stunts are jaw dropping (Martin drives onto a speeding train, then drives *into* it). An underwater escape is clap-your-hands clever. The fast-paced editing, driven by such tunes as The Stooges' "I Wanna Be Your Dog" and Busta Rhymes's "Bounce," is driving, not the 'so fast you cannot tell what's going on' mush that passes so often today. Statham is in superb physical shape and matches his uncommon physique with a taciturn intelligence and that low, gravelly voice. He'd be a welcome presence in some higher profile films. Newcomer Natalya Rudakova, a Russian hair stylist in NY noticed by Luc Besson, plays Valentine as one of those bratty, privileged Euro-Trash types and while a bit of mystery is required of her in the early goings, it takes the audience longer than Frank Martin to warm up to her. She is blessed with such a dense spray of facial freckles that they acquire a strange fascination on their own. François Berléand, who just nailed a perverse turn in "A Girl Cut in Two," isn't in the film much, but gives it warmth and humor whenever he's around. "Transporter 3" is a good old-fashioned genre film that delivers and does it well enough to stand on its own. I'll be checking out the first two installments.