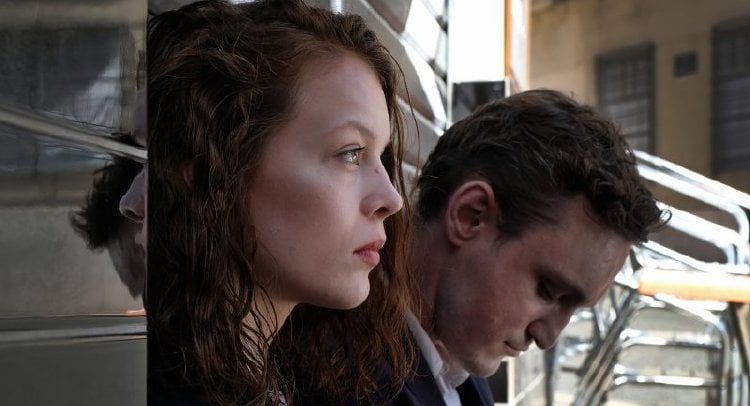 Georg (Franz Rogowski) is a German refugee in Paris trying to get passage to Mexico. But, the police are rounding up any and all without proper papers and he must flee to the relative safety of Marseilles if he is ever to get his pass to “Transit.”

Fleeing the fascism that is overtaking Europe, Georg (Franz Rogowski, “Victoria,” “Happy End”) is warned that Paris is about to be closed off. A friend, Paul (Sebastian Hülk, “Red Sparrow”), asks him to pick up two letters from antifascist author Weidel. Georg arrives to find a nervous hotelier cleaning up a suicide, then, with the letters in hand, witnesses Paul in a street line-up, hands against a wall, a gun to his back. Georg makes his way to Marseille on a train, a city where everyone is in “Transit.” Cowriter (with Anna Seghers)/director Christian Petzold’s most recent films have featured a woman under the surveillance and control of a Stasi agent (“Barbara”) and another getting reconstructive surgery after Holocaust disfigurement (“Phoenix”). Both films were about duality and identity during treacherous times. With his latest, adapted from a 1944 novel yet set in modern times, Petzold centers on a male refugee on the run assuming the identity of another man, then falling in love with that man’s wife, a “Casablanca” for today. This one assumes the air of the mythic with godlike narration seemingly removed from the story, the speaker’s (Matthias Brandt) identity revealed in a bit of last act irony to be the consummate listener. After traveling with a suffering, one-legged man, Heinz (Ronald Kukulies), who doesn’t make it, Georg arrives and joins the throng awaiting a hearing at the U.S. Embassy. Our narrator notes that no one wants to hear another’s stories, one horrific tale after another. A woman with two dogs (Barbara Auer) starts in, spouting hatred for the animals and their owners who left her to get them out, when George is delivered, hearing his name (she will continue to cross his path). He says he is there about ‘the Weidel affair,’ and is immediately let into office of the consul, who believes him to be the author himself. There are two letters waiting for him, one from a wife who ‘cannot wait to see him,’ the other an invitation for he and his wife to live in Mexico (the two letters Paul had asked to be delivered comprised one from Weidel’s wife telling him she was leaving him and another stating his latest work could not be published). With two transit passes and two passages on a ship bound for Mexico in the offing, Georg seeks out Paul’s wife Melissa (Maryam Zaree) to deliver the bad news and he bonds with their young son, Driss (Lilien Batman). This will lead Georg to a doctor, Richard (Godehard Giese), and the beautiful woman with him, Marie (Paula Beer, “Never Look Away”), when the undocumented boy falls ill. The doctor confides to Georg that he is planning on leaving Marie behind as many counting on him await. Marie, it turns out, was onboard a ship with him just the week prior, but disembarked at the last minute leaving her no recourse. Marie is caught between her new love and guilt for the husband she left behind, having recently heard he was in Marseilles... It is chilling just how believable talk of running from encroaching fascism and ‘cleansing camps’ is in today’s world, Petzold’s gamble paying off. Rogowski, with his boxer’s face, has an offbeat handsomeness and hangdog charm, a sympathetic romantic lead who grounds the film. All of Petzold’s characters are betwixt and between, their stories continually crossing paths. The filmmaker leaves us with a mystery on top of yet another coincidence as his ship Montreal sets sail for Mexico from Marseilles, his one misstep the tonally off choice of Talking Heads’ ‘Road to Nowhere’ over his closing credits. Grade:

Director Christian Petzold adapts the 1944 novel by Anna Seghers, Transit, about a German refugee fleeing the Nazis in occupied France, heading to Marseilles, the place he can get passage out. Petzold cleverly retells this story and sets it in a 21st century France under fascist occupation. This not-so-unimaginable setting is a backdrop for the film’s real focus on Georg, his plans to escape and how those plans could go badly wrong because of his inherent need to care for others. Georg is given a pair of letters, by another refugee, to deliver to a writer named Weidel. When he arrives at the author’s apartment, he sees the aftermath of Weidel’s suicide. The letters lead George to make the dangerous journey to the relative safety of southern France. Once in Marseilles, Georg meets a young refugee boy, Driss (Lilien Batman), and his deaf-mute mother, Melissa (Maryam Zaree). Quickly, Georg becomes a surrogate father for the boy and his pending departure affects the Driss with the feeling that he is, once again, being abandoned. Add to this the lady mentioned in the Weidel letters, Marie (Paula Beer), and Georg’s grand plan may not happen. Setting the story in our present time gives the filmmakers the opportunity to make a statement about the current political conditions in the EU and the new rise of fascism. The trappings are modern, but the sensibility of the film holds to the retro nature of WWII and the Nazi domination of Europe. Christian Petzold makes no bones about how he feels about society’s return to the supremacist fascist dictatorships that thrust the world into a world war that killed tens of millions. “Transit” is both a historical artifact of over 70 years ago and a cautionary tale of warning for the present.