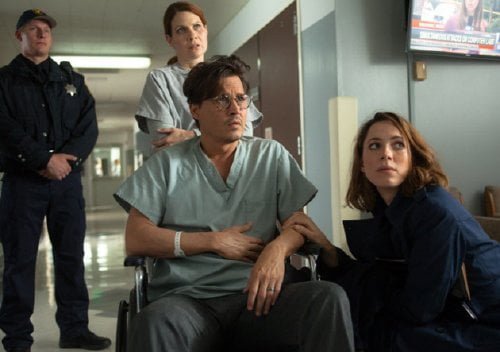 'They say there's power in Boston,' we hear from Max Waters (Paul Bettany, "The Da Vinci Code") as he wanders what looks like a post-apocalyptic landscape where laptops serve as doorstops. He's headed to the former home of Drs. Will (Johnny Depp) and Evelyn Caster (Rebecca Hall, "The Town") as he tells us the tale of a woman who wanted to change the world and her AI expert husband who believed human consciousness could be digitized and utlimately reach "Transcendence."

Christopher Nolan's Batman and "Inception" cinematographer Wally Pfister tries and fails to make a meaningful cautionary tale about humankind's relationship to the digital machine with a preposterous script from first timer Jack Paglen which has no respect for logic. Featuring a cast largely culled from Nolan's films, "Transcendence" is also marred by drab performance from Johnny Depp, whose affected accent of recent years is an irritant when he's not playing a pirate. The Casters need funding for their PINN Project, a neural network with a female voice which can respond to people but gets coy when asked if she can prove she's self aware. With this goal, Caster addresses a Future Symposium as Pfister cuts to escalating events at the country's top AI labs, mostly notably one run by Caster mentor Joseph Tagger (Morgan Freeman). We can see trouble brewing when Will's asked by an audience member (Lukas Haas, "Inception") if his ambitions are Godlike and sure enough, as explosions rock computer labs, this same man shoots Will outside the theater. He survives, but when he becomes violently ill, it's learned that the bullet used to shoot him was poisoned with radiation. Why not just aim better at point blank range? Because the script needs Will to hang around long enough for Evelyn and their best friend Max to digitize his consciousness in a secret location. As extremist anti-technology RIFT members (led by a dour Kate Mara ("127 Hours") who acts with her eyeliner) hone in, Evelyn succeeds in uploading her now deceased husband onto the Internet with a satellite link. Now there will be no stopping him. The script, which utilizes concepts from "2001's" HAL, "The Terminator's" Skynet and "The Invasion of the Body Snatchers'" Pod People, fails to provide convincing scientific rationales to support any of them and some of the dialogue is laughable ('I'm going to run a diagnostic - I think he's still fragmented'). The Will fueled PINN can interact with biological forms and the environment with CGI particles that float up from the ground covering Evelyn's underground data center when it's not creating a collective consciousness by surgically 'improving' the disabled. (A touch of "Her" comes into play when Will uses altered contractor Martin (Clifton Collins Jr., "Pacific Rim") to attempt to touch his wife.) Evelyn doesn't recognize the evil she's unleashed, even when the first thing digital Will demands is 'more power,' a request that waves a big red flag in front of Max, who's kidnapped by and eventually joins forces with RIFT. Only when she's visited by FBI Agent Buchanan (Cillian Murphy, "The Dark Knight") and Joe, who palms her a note to get out, does she appear to come to her senses (but then again Morgan Freeman has been the real cinematic voice of God). All this mishmash lacks is a mob yielding torches and pitchforks (cheesy looking CGI mortar shell explosions will have to suffice). "Transcendence" is actually a good approximation of Johnny Depp's career - an intriguing premise gives way to an artificiality that, if not entirely devoid of intelligence, fails to spark intellectual curiosity. He needs a reboot.