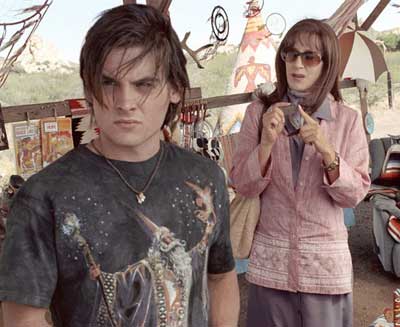 Having lived the balance of her life as Stanley, Sabrina 'Bree' Osbourne (Felicity Huffman, TV's "Desperate Housewives") is still getting used to passing in public as she prepares for the final surgical step into her physical transformation as a woman. Giddy over the upcoming event, she receives a long distance phone call from a New York jail asking for bail for a teenaged son she never knew she had. Forced to confront the issue by her therapist as a precondition of her longed for operation, Bree meets the drug abusing, street hustling Toby (Kevin Zegers, the "Air Bud" movies, "Wrong Turn," "Dawn of the Dead") who mistakes her for a Christian missionary, a notion she doesn't disabuse him of. When Toby announces his plans of becoming a porn star on the West Coast, Bree, both touched and guilty, decides she will attempt some disguised parental influence and the odd couple share a battered old station wagon on a trip "Transamerica."

Anyone who goes to see "Transamerica" expecting to see a film about a transsexual will be sorely disappointed. While one of its lead characters does belong to this minority, her transsexuality is used as a character quirk and device for humor and conflict rather than any real exploration of the subject. Instead "Transamerica," its double entendre title notwithstanding, is a solid road movie/dysfunctional family saga featuring a risky turn by Huffman and a nice step forward for Zegers. 'I won't marry you' Toby announces before they set off, wary of the older woman's intentions. It may seem a strange condition to set, but writer/director Duncan Tucker does a sleight of hand, cycling right back around to a flip side of that very confrontation by his film's emotional climax. How does he get there? First, the puppyish Toby acts less than his seventeen years as he's treated to motel rooms and diners. An attempt by Bree to drop him off at his stepfather's in Kentucky reveals horrific details of the boy's upbringing, which bring out Bree's maternal protective instincts and seal her sense of responsibility for the boy, even as she has to now win back his trust (Toby having been insistent on not wanting to stop there). In an attempt to work within her limited budget, Bree relies on a stranger from a transsexual support network for lodging and is horrified to discover a full blown tranny party going on, but Toby revels in the sexually open environment and catches his first glance of a partially dressed Bree when he barges into her room unexpectedly. Shortly afterwards, though, Toby, whose street sense is leavened with a solid dose of naivety, looks in the rear view mirror one night when Bree has pulled over for a pit stop and finally discovers the truth about Bree's physical makeup. Toby's not upset about the fact itself, but about the lie Bree has been perpetrating, and he retaliates by belittling her to strangers like the New Age hitchhiking teenager (Grant Monohon) he forces her to pickup. This kid presents the traveling pair's biggest test yet when he steals their car, complete with Bree's hormone pills, but they rebound when she draws the kind attentions of Calvin Manygoats (Graham Greene, "Dances With Wolves," "The Green Mile," in a nicely understated performance) who gets them to their next stop - Bree's parental home in Arizona where everything hits the fan. As can be seen in the synopsis above, Tucker's nicely written script couples stops along the road with significant developments in the travelers' relationship. Dialogue is often very funny (when Toby asks if Bree is from a certain church, Bree replies on the fly - 'I'm with the Church of the Potential Father'), but discussion of Bree's transformation stays at the sound bite level of clinical and psychological information. We get some inside subtext from the credit opening vocal therapy tape revealed to be playing on Bree's TV, but the film's only real psychological and emotional derring-do comes appropriately at its climax, when Toby is forced to make a choice and responds surprisingly. Sadly, Bree's embarrassed apology for the 'ersatz women' she's exposed Toby to as 'people pretending to be something they're not' is left unexplored. An attempt at psychological depth by having Bree obscure his half-Jewish background as Native American Indian doesn't really work except as a foreshadowing device to the romance suggested (with nice restraint and a black hat) at film's end. After women like Hillary Swank and Charlize Theron have recently won Oscars for playing transsexuals and beefy serial killers, it's hard not to feel the role of Bree is a bit of stunt casting to draw attention towards an undervalued actress, but Huffman largely pulls this tricky role off. She gives her voice a lower register yet keeps it soft and lilting, about what one would expect from a man and his hormone therapy trying to pass as a woman, and makeup changes throughout the film, from the initially overdone look to something more subtle to a ragged, hormone-deprived emerging masculinity. Even Huffman's hands are made to look ungainly with the expert application of artificial nails. She exhibits a slight hesitancy in her body movements and never overdoes an ideal of femininity. Zegers mixes street bravado with the longing for belonging of an abandoned child in an engaging performance. Fionnula Flanagan ("The Others," "Four Brothers") makes a startling entrance as Bree's mother, her tanned hide strongly contrasted with her cotton candy hair (Jason Hayes' makeup once again excelling in the innuendo between mother and daughter's appearances). Kudos for pairing her with Burt Young ("Rocky," "Back to School") as dad Murray, imaginative casting that works surprisingly well. Carrie Preston ("The Stepford Wives") makes less of an impression, playing to the back row as Bree's alcoholic sister Sidney. Production design focuses on an America unseen by tourists, with Bree's L.A. existence as a dishwasher in a family run Mexican restaurant and home in a modest bungalow a refreshing change to Hollywood's extremes of wealth and poverty. "Transamerica" may not be a revolutionary film in the vein of "The Crying Game" or "Boys Don't Cry," but it works as a road trip dramedy with a twist and Huffman's work is worthy of year-end award consideration.

Bree Osborne (Felicity Huffman) is in the last stages of her sex change from man to woman. With the final operation only a week away, she gets the stunning news that she may be a father! The boy, Toby (Kevin Zegers), is a teen street hustler in New York City and her therapist insists that Bree make the trip across country and resolve this very significant blast from the past, or forgo the operation, in “Transamerica.” Felicity Huffman is the main attraction for this little, indie film about a man who just wants to be the woman that he is. The quirky screenplay by first-time feature writer/director Duncan Tucker showcases the actress in the tough role of a woman playing a man becoming a woman. The subtle use of makeup and camera angle succeeds in making the attractive Huffman appear mannish in a believable way. Coarsening Huffman’s features and making her hands appear large, like a man, coupled with her solid performance, make this a noteworthy performance. She masks the woman-playing-a-man by being a man wanting to be a woman. There isn’t much substance in the episodic telling of Bree’s journey to New York where she bails her possible son out of jail. Toby’s plan is to get to LA and get an acting job – in the porno film business. Bree, whom Toby thinks is just a do-gooder Christian, offers to drive the boy across country with the plan to reunite him with his stepfather down south. If things go right, Bree can still make it back to LA for her long awaited operation. Of course, if things go as planned in the movies then films would only be about 30 minutes long and boring. Bree and Toby take off on their road trip, stopping frequently, and have little adventures and mishaps along the way. Toby doesn’t trust Bree and doesn’t know of their relationship or of her real gender and plans to change it. The main story thread deals with the obvious between Bree and Toby and the conciliation of issues. The rest of the film is peppered with the episodes of their road trip, from staying over at a gender-bending commune to visiting, under duress, Bree’s family. Huffman is on my long list for award note come the end of the year. It is a brave and different role for an actress. I’m less thrilled with the rest of Transamerica.”