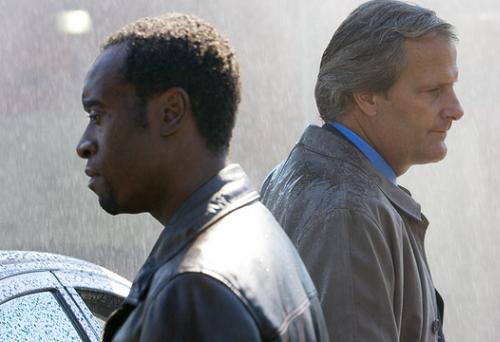 Sudan-born Samir Horn (Don Cheadle) has spent his life wandering the earth, mainly as a US Special Operations explosives expert. His rekindled Muslim faith, though, has made Samir an outcast and he is forced to go under ground. He resurfaces, years later, brokering an arms deal to supply the explosive Semtex, AKA terrorist playdough, to a well-connected Muslim extremist group in Yemen. An assault on the meet brings Samir to the attention of the FBI whose mission is to hunt him down as the “Traitor.”

Samir Horn (Don Cheadle, "Ocean's Thirteen," "Talk to Me") was born in Sudan where he witnessed his father's death in a car bomb explosion. When Horn arrives to speak to a contact in Yemen, he is regarded with suspicion by Omar (Saïd Taghmaoui, "The Kite Runner," "Vantage Point"), and when the F.B.I. raids and incarcerates them all as terrorists, Omar brands Samir a "Traitor." "The Day After Tomorrow" scribe Jeffrey Nachmanoff adapts a Steve Martin story and directs this taut tale of a devout Muslim being investigated by both his own people and his adopted land, the U.S. Jumping around the globe like James Bond (Sudan, Yemen, D.C., Costa del Sol, Madrid, London, Chicago, Marseilles, the U.S./Mexican border, etc.), Nachmanoff keeps rachetting up the tension in a cat and mouse game that plays out to the very last second. After being interrogated by good/bad cop team Roy Clayton (Guy Pearce, "L.A. Confidential," "The Proposition") and Max Archer (Neal McDonough, "Flags of Our Fathers," 2007's "The Hitcher"), Samir has given them no information about the cases of detonators he had on his person other than to say he sold them to the highest bidder. Imprisoned in Yemen as a terrorist, Samir gains Omar's trust with a combination of his circumstances and his devout faith, so much so that when Samir's leader Nathir (Raad Rawi, "The Kingdom") arranges a prison break for six men, Omar vouches for Samir as a seventh. The duo are whisked away to the French port of Marseilles where Samir enters a philosophical debate with their contact Fareed (Aly Khan, "A Mighty Heart"), a Muslim who claims to enjoy worldly things like vintage Krug champagne in 'order to fit in' with the enemy. Samir conflicts with the group again when, after training a young French Muslim as a suicide bomber, he is killed for having let information slip. Samir rescues the operation by devising remotely triggered bombs which he sets off in a U.S. consulate building in Nice. But Samir is clearly shaken when he hears eight were killed. That's because he is deeply undercover with U.S. contact Carter (Jeff Daniels, "The Squid and the Whale," "The Lookout") who assured him that part of the building would be cleared by all but two bodies from the morgue. Carter is the only U.S. operative who knows Samir's status and he pushes him to continue on with Nathir's plan to bomb fifty U.S. buses in the American heartland on Thanksgiving. In the meantime, Clayton and Archer are hot on his trail and he is elevated to a shoot to kill status within the F.B.I. "Traitor" is an attempt to distinguish the devout Muslim between the radical within a post 9/11 thriller and it does so on a simplistic basis (Lorena Gale as Samir's mother gives an effective if somewhat ambiguous read to Clayton in their adopted home of Chicago). The film works better as a thriller in which Samir's character is forced deeper and deeper into enemy territory with fewer and fewer options. The film makes early attempts to keep us guessing where Samir's loyalties lie, but there are few who would be fooled. (Had the story been woven differently, casting Cheadle in the role would have been great sleight of hand.) Cheadle plays the role earnestly, with little change of emotion throughout. Support is solid if unexceptional with Taghmaoui given the most emotional role as the Muslim who wavers between friendship and belief in his Jihad. Pearce and McDonough make for a nice pairing with the 'good' agent deadly serious and the 'bad' adding the tiniest dollop of humor (the film's only). Despite Nachmanoff's fairly brisk pacing, the film has some drag in its midsection (the inclusion of Samir's old girlfriend Chandra adds little to the story), but the director atones with turn of the screw climax most will not see coming. Director of Photography J. Michael Muro ("Crash," "Rush Hour 3") gives the film a cool, misty look and composer Mark Kilian ("Tsotsi," "Rendition") score is a dark, foreboding moan. "Traitor" is a workmanlike thriller that uses its terrorism storyline to underscore the vulnerability of everyday citizens and the moral implications of sacrificing the few to save the many.

Yemeni soldiers, unofficially accompanied by FBI agents Clayton (Guy Pearce) and Archer (Neal McDonough), raid the explosives deal, arresting Samir and the others. Allah watches over the devout Muslim, though, and, with the help of members of the notorious terrorist group, El Nathir, he escapes prison with his new friend, Omar (Said Taghmaoui). He falls off the anti-terrorist radar and joins El Nathir as their suicide bomber explosive guru. But, something is up when Samir’s plan to bomb the US consulate in Nice ends up with eight dead. Samir is stunned by the news but hides it from his compatriots. Meanwhile, Agents Clayton and Archer, as the spearhead investigators for a joint US anti-terrorist task force, are ever-watchful and spot Samir on surveillance tapes taken immediately after the bombing. This begins a cat-and-mouse, cops-and-robbers story that twists and turns around the world with such exotic (and not so exotic) locations as Yemen, Madrid, London, Toronto, Chicago, LA, Halifax and the US-Canadian border. It is a poor man’s “Syriana” that gets down and dirty with its far-ranging crime busting intrigue. Sophomore director Jeffrey Nachmanoff (“Hollywood Palms”) hits a good one with a surprising, mature action thriller that is thought provoking, action-packed (in an intelligent way) and has a surprise climax that caught the critic crowd, including me, by surprise. Hence, a warning: DO NOT WATCH THE TV OR THEATRICAL TRAILER BEFORE SEEING “Traitor”!!! It ruins the fine storytelling by revealing too much plot. This is very bad for those of us who like to be surprised when seeing a film, so be forewarned. The tightly wound script, from the story by Nachmanoff and, believe it or not, Steve Martin, is exciting, intricate (without being confusing), action-filled and tense. The story plot unfolds at an even, though not slow, pace, allowing the many characters to develop and become three-dimensional. Don Cheadle gives a subdued, thoughtful performance as Samir Horn, Sudan-born with an American mother (Lorena Gale), he is an enigma, seeming a passionate member of the terrorist community. There is much more to the man, though, and, as the story unfolds, his secrets come to light. Opposite Cheadle are Guy Pearce and Neal McDonald as the “good cop/bad cop” duo who will stop at nothing to find their prey. The pair holds their own side of the story effectively. The supporting cast is large and talented. Said Tagmaoui is outstanding in an excellent perf as Samir’s friend and mentor, Omar. The rest perform their roles with convincing believability Techs are up to the task the wide-ranging story poses. Director of photography J. Michael Muro lenses each locale in its own light, helping give “Traitor” a truly international flavor. Score, by Mark Kilian, maintains a Middle East undertone that is integral to the helmer’s screenplay. Locations are carefully selected and the behind the camera crew uses them to solid effect. Unfortunately, the marketing people feel the need to give away much of the story in the trailer. This is a shame as I, without knowing much about the film when I screened it, enjoyed the intelligence and quality (and very surprising climax) of the story telling.