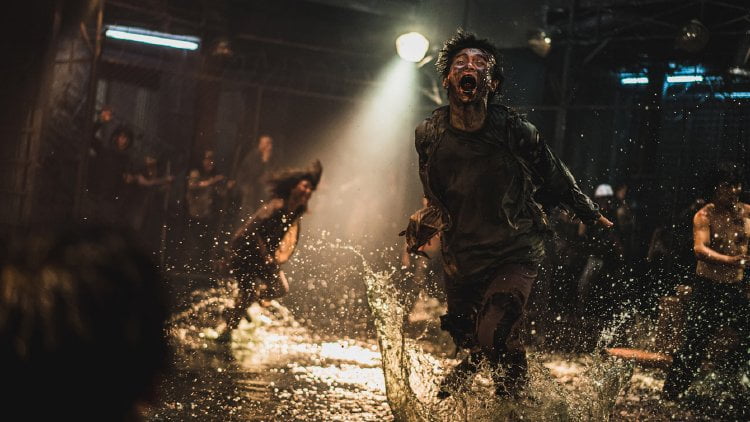 After the train arriving in Busan delivered a pandemic of zombies, South Koreans are looking for their last chance to get out of an overrun country.  Marine Captain Jung-seok (Gang Dong-won) bypasses a desperate family in need on his way to get himself, his elder sister (Jang So-yeon), his brother-in-law Chul-min (Kim Do-yoon) and nephew Dong-hwan (Moon Woo-jin) to a ship at Incheon Port.  Four years later, Jung-seok and Chul-min are among the reviled in Hong Kong, so they grab an opportunity to retrieve $20 million in cash by returning to the “Peninsula.”

Cowriter (with his "Train to Busan" partner Joo-Suk Park)/director Sang-ho Yeon, who began his zombie run with his animated “Seoul Station” before moving to live action with “Train to Busan,” one of the best examples of this horror subgenre, disappoints with a sequel that is more genre rehash than revelation.  Lower your expectations and this zombie adventure tale by way of “Mad Max Beyond Thunderdome,” AMC’s ‘The Walking Dead’ and countless videogames is entertaining enough, but its pretentious U.S. title of “Train to Busan Presents: Peninsula” promises more than it delivers.

Leaving that family by the road comes back to haunt Jung-seok almost immediately when an outbreak on the ship’s lower deck consumes his sister and her child.  In a scene which may foretell post-COVID America, we see the two men treated as outcasts on the streets of Hong Kong, a food vendor refusing to touch their money as others scatter in disgust.  So when a mercenary offers them and others the chance to redefine their status as millionaires, they jump at it, even though it means reentering their infected homeland.  Told that ‘zombies are blind in the dark,’ the group, armed with a satellite phone to contact the drop off ship for pickup, plans a quick in and out.

At first that seems exactly what will happen.  The first abandoned truck, located by a glass stairwell full of walking dead, isn’t the right one, but Jung-seok quickly finds the right license plate.  But in removing the ‘dead’ driver behind its wheel, the horn is inadvertently sounded, bringing forward not only a horde of zombies but Unit 361, a group of marauding survivors led by Sgt. Hwang (Kim Min-jae).  While their partners are picked off, Chul-min finds refuge in the back of the truck (where the U.S. dollars are stored), which is driven away by Hwang’s crew, and Jung-seok is rescued by young hot shot driver Joon-i (Lee Ra), who just happens to be the daughter of Min-jung (Lee Jung-hyun) and older sister of Yu-jin (Lee Ye-won) who he’d left on the side of the road years earlier.

And so Yeon goes with the ‘other humans are more dangerous than the zombies’ aesthetic of ‘Walking Dead,’ Unit 361, which is led by the suicidal Capt. Seo (Koo Gyo-hwan), entertaining themselves by pitting other survivors against zombies in arena death matches.  He also goes heavy on the CGI, Joon-I’s car smoothly careening around an artificial landscape.  As that satellite phone switches hands, the mercenary on the other end not caring *who* he picks up as long as they have the cash, Yeon builds to a multi-pronged climax at the port which he distinguishes with an uncanny use of the dawn’s light capped by the appearance of a character we’d assumed was only the mad ramblings of grandfather Elder Kim (Kwon Hae-hyo).  But even here, Yeon can’t get away from cliché, blunting the best part of his work with yet another overblown, sentimental rescue mission.

“Train to Busan Presents: Peninsula” is capable, at least, of standing on its own, but it has given itself a self-inflicted wound by tying itself to its far superior forerunner.  Zombies are mere background in this popcorn pot boiler, but they look beautiful in their stunning lit climactic close-up.