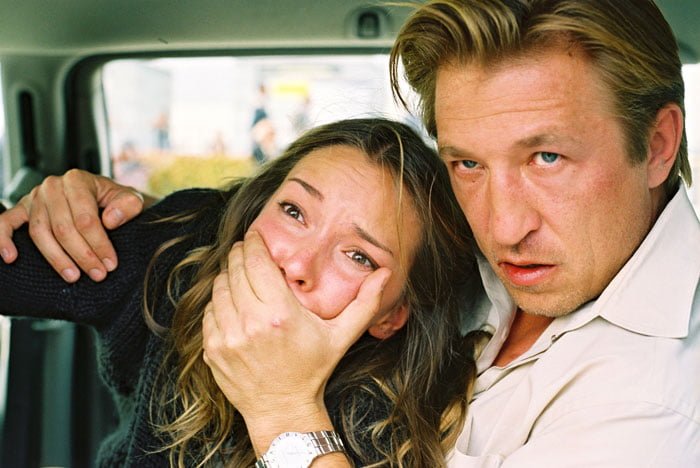 Mexico City street tough, Jorge (Cesar Ramos), adores his younger sister and, on Adriana’s 13th birthday, presents her with a fancy new bicycle. Her mother warns her, though, not to ride on the mean and dangerous streets of the barrio. The youngster ignores the warning and sneaks out early one morning to ride her precious bike. She never came home. Jorge vows to find his missing sister and stumbles upon the ring of ruthless sex traffickers who kidnapped her in “Trade.”

The resourceful teen follows Adriana’s trail to the sordid underground world where flesh traffickers kidnap young women and girls and auctioned off on the internet to the highest bidder. He leaves the barrio and treks across the land, crossing illegally into the United States. He meets Ray, a Texas lawman on his own quest to find his long-missing daughter. This unlikely duo teams up to find Adriana. Trade” is a film with two separate stories, one intriguing and one not so fascinating. The former follows Adriana through her harrowing ordeal at the hands of slavery ring. She is befriended by a young Polish woman, Veronica (Alicja Bachleda-Curus), who was also duped and kidnapped by the sex dealers. Together, they go through the horrible experience of traveling the underground “railroad” that will end in being sold as sex slaves. Veronica is repeatedly abused and beaten by her captors but virgin Adriana is being saved for her buyer at the upcoming auction. This is a taut story that is both gripping and gut wrenching in its depraved ruthlessness. Jorge’s story of his pursuit of Adriana starts off well enough as the teen uses his wiles to track the girl and figure out how to set her free. Things grind down to a crawl, however, when he and Ray cross paths. The lawman’s motivation – he is searching for his daughter, also taken by sex trafficker, apparently for 12 years! – seem farfetched and fruitless, as he has not had a lead in a long, long time. The two team up; using Ray’s life savings, to track down Adriana and bust up the sex ring but this story generates no empathy or energy. I have always been a Kevin Kline fan so I had high expectations in “Trade.” Unfortunately, when Kline enters the film it deflates. The oomph, though, lay in the solid performances by the unknowns in the cast. Cesar Ramos is convincing as the rebellious teen who goes to extraordinary lengths to save his sister. Alicja Bachleda-Curus gives a powerful performance as a young woman unknowingly trapped as a victim of a vicious underworld. Her fate is shocking and abrupt. Paulina Gaitan holds her own as the 13-year old thrust into a frightening and violent world. The rest of the supporting cast do fine fleshing out their characters. Techs are unremarkable. The “Inspired by a New York Times article…” title at the start of the film should have been a clue that things might have a manufactured feel. Director Marco Kreuzpaintner does an uneven job in telling the story (screenplay by Jose Rivera “inspired” by Peter Landesman’s NY Times expose, The Girl Next Door) that is intermittently shocking and dull.