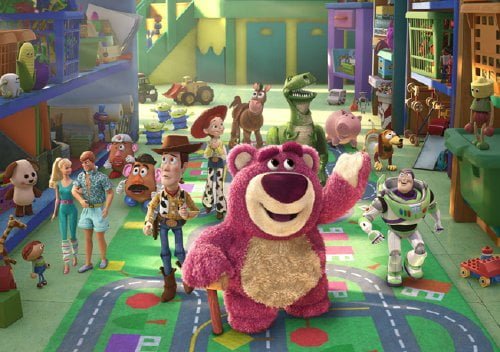 At seventeen, Andy (voice of John Morris) is preparing to leave for college and his mom (voice or Laurie Metcalf) instructs him to divide the things in his room into three piles - 'college,' 'attic' and 'trash. Andy's toys, who have been nervous about the upcoming changes, are horrified to be thrown into a plastic trash bag, all except Woody (voice of Tom Hanks), that is, who gets tossed into the college box. The toys manage to save themselves, getting into a box with Barbie (voice of Jodi Benson) marked for Sunnyside, a local day care center, and Woody cannot convince them that Andy had intended they remain safe in his attic in "Toy Story 3."

Last year, Disney rereleased "Toy Story" and "Toy Story 2" in 3D versions in anticipation of this closing chapter of the story. While the 3D "Toy Story 3" isn't utter perfection, as the first two films were, it is a welcome reunion with old friends, often funny and eventually quite moving. This time around "Little Miss Sunshine's" Michael Arndt joins John Lasseter and cowriter/director Lee Unkrich (co-directory "Toy Story 2," "Finding Nemo") in penning a new chapter for Woody, Buzz Lightyear (voice of Tim Allen) and the gang, so in some ways, it is surprising that the story often seems to be traveling old ground. The film's opening gambit is a good one. First we're treated to a fantastical rendering of Andy's play, featuring a train set already ensconced in the attic. Then, recognizing not only that Andy has grown up, but that the idea of what makes child's play has, Woody manipulates a call to Andy's cell phone which he has stashed among them on the toy chest. Andy reaches in (as younger sister Molly types away at a laptop) and grabs it, disregarding his old friends. After the trash bag mishap, Woody travels with the group to Sunnyside, but when they won't believe that Andy really was headed towards the attic with them, Woody is forced to take his leave and return. But Sunnyside is built like a prison camp and Woody ends up caught in a tree where a young girl, Bonnie (voice of Emily Hahn), disengages him and brings him for an afternoon of play with Mr. Pricklepants (voice of Timothy Dalton), a lederhosen wearing stuffed porcupine, Buttercup (voice of Jeff Garlin), a plush unicorn, Trixie (voice of Kristen Schaal), a plastic Triceratops from Rex's line and rag doll Dolly (voice of Bonnie Hunt), painted as playtime villain. It is there that Woody learns that Sunnyside only appears to be a perfect place for toys and that Lots-o’-Huggin’ Bear (voice of Ned Beatty), the plush teddy that smells of strawberries, actually runs the place with a tyrant's fist, ensuring that most newly donated toys do not last very long. It's Woody to the rescue! As with the second film, there are movie references here from "Mission Impossible" to "The Great Escape," which is in standing with the series, but in other respects we cannot help but feel the filmmakers are beginning to repeat themselves. The threat of yard sales has been heard before and we learn Bo Peep and Etch have been lost to one. "Toy Story 2" was one giant kidnapping/rescue film which essentially is what 3 is as well, times, well, 3, the villain this time a fellow toy rather than a human. Slinky's been used to cross caverns and the Potato Heads' appendages have been used for surveillance before. Even within "3" there is repetition, from Woody's loyalty to Andy argument falling on deaf ears to repeated capture and escape routines. There is also one shocking bit of story-telling laziness here. Woody loses his hat outside in the grass. Later, it's merely handed back to him within Sunnyside. Perhaps the explanation for this was cut, but given that "3" runs 17 minutes longer than "2" and a whopping "32" minutes longer than the original, surely there was something else that could have gone. That said, there's still an awful lot to love here, from the introduction of the vain Ken (voice of Michael Keaton) looking to be 'completed' in his Dream House to user manual librarian Bookworm's (voice of Richard Kind) reaction to Barbie disguised as him. Buzz's return to 'Demo' mode allows for his friends to fall upon the unknown Spanish toggle, much to Jessie's (voice of Joan Cusack) swooning delight (a new version of "You've Got a Friend in Me" was recorded by the Gypsy Kings for the occasion). Mr. Potato Head's (voice of Don Rickles) bodily substitution of a lunchbox tortilla is plain Pixar wit, as is their subtle fact that monkeys are inherently evil. The film goes out on a big note from the toys last almost-certain-death 'adventure,' which they approach with grace and group loyalty, to the film's final sequence, a poignant goodbye to childhood which will have you reaching for the Kleenex. But as beloved as these characters are, now that Andy's said goodbye, it is time for us to as well. B+ The film is preceded by a Pixar short, "Day and Night," in which the outline of a blobby cartoon man is filled in by the natural background we only see within his lines. It's a humorous idea, handled wittily as storm clouds indicate the passing of gas and a waterfall the morning's passing of liquids. Then the man's opposite, showing in nighttime what he shows in light, arrives and the two begin to squabble. It's supposed to be a message on tolerance, but it loses itself a bit and the good idea grows repetitious. (Director Teddy Newton voices "Toy Story 3's" Sunnyside insider, Chatter Telephone.)