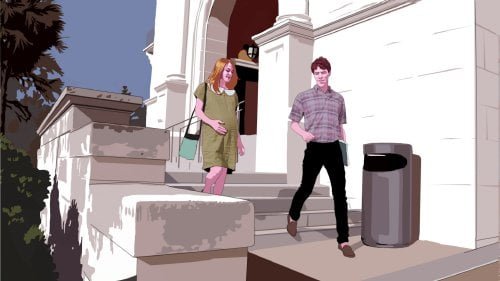 On 1 August 1966, a heavily armed gunman took the elevator to the observation deck on the 27th floor of the tower on the campus of the U of Texas, Austin. There, and for 96 harrowing minutes, the sniper killed 18 people, including an unborn child, and wounded 32 others. Keith Maitland recreates those tragic minutes in a thoughtful and very different documentary called, simply, “Tower.”

When he was in the 7th grade, director Keith Maitland's history teacher recounted her own experience as a student on campus at the University of Texas on August 1, 1966, the day Charles Whitman shot 49 people from its main building tower. But Maitland doesn't focus on the shooter, instead using witness accounts which he reenacts with rotoscopic animation mixed with archival footage and stills (the first shot follows an animated light blue VW Beetle, which 'drives' into a photograph to The Mamas and the Papas 'Monday, Monday'). Maitland's achievement is to plunge us into the nightmare right along with the people who lived through it, from the pregnant 18 year-old, Claire Wilson, who was the first shot (and miraculously survived despite bleeding for over an hour in full view beneath a glaring sun) to University book store manager Allen Crum, whose heroic efforts that day helped to bring the sniper down to Austin radio station KTBC, which tried to make sense of the chaos via on ground reporter Neal Spelce. The results are astonishing and unlike any documentary that has preceded it, an edge-of-your-seat account which gradually segues from 1966 to the present day, where survivors recall their experience through the lens of fifty years of introspection. "Tower" is a towering piece of work. Grade:

An animated documentary about the first mass school shooting in the US sounds kind of strange, but in the hands of a talented animator and documentarian it is both mesmerizing and, unfortunately, timely. In a day where school shootings are far too frequent, the subject matter is gut-wrenchingly fresh. This well-researched documentary uses archival footage from those 90+ deadly minutes. But, instead of interspersing talking head interviews of the survivors and eye witnesses – which the filmmaker does use – Maitland utilizes recreations of the day’s events and its aftermath. Live actors recreate the scenes of the horrific event, which has been done before. Maitland, though, uses rotoscoping – look it up – to turn the live action into animation. This technique blend quite well with the archival footage and live interviews, past and present. I am not going to talk about the details of “Tower.” That is something that, if you are not familiar with that sorrowfully historic day, I will let you find out for yourself. But the suffering of the victims and acts of police and civilian heroism is captured vividly and powerfully in this unique document of our country’s sad first.