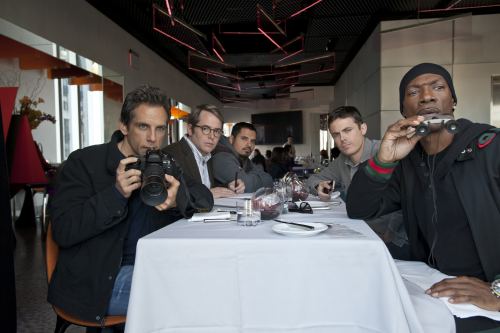 Josh Kovacs (Ben Stiller) is the incomparable building manager of The Tower, where the richest of NYC's rich live. He plays chess via computer every morning from his Astoria apartment with penthouse dweller Arthur Shaw (Alan Alda, TV's 'M.A.S.H.'), an investment banker who hints he'd like to take Kovacs to the Caribbean to manage his new resort there. Everything changes when Shaw is revealed to have swindled clients à la Bernie Madoff and Josh must tell his employees that he entrusted their pensions with the man. Kovacs is floored by Shaw's indifference to his crimes and his violent reaction loses him his job, so he decides to form a retributive team to pull a "Tower Heist."

This tale of a Wall St. Robin Hood should seem very timely, but the lost savings of blue collar workers is just a springboard for director Brett Ratner (the "Rush Hour" series, "Red Dragon") to indulge in action comedy tropes as old as Eddie Murphy's box office draw. It's no surprise that the writer of 2001's "Ocean's Eleven," Ted Griffin, was involved as the film has the same basic template without the loose camaraderie of that film's cast. The film has exactly three things going for it - a red 1963 Ferrari 250 GT Lusso, the under-utilized pairing of Murphy and Gabourey Sidibe ("Precious") and the funny/tough performance of Téa Leoni (Ratner's "The Family Man") as Special Agent Claire Denham. Ben Stiller does his same old earnest high intensity schtick as Kovacs which works best in establishing scenes. Griffin and Jeff Nathanson ("Rush Hour2, 3") lay their foundation by giving various details about just what lengths building services go to for their wealthy residents and Kovacs almost pops a fuse when Charlie the Concierge (Casey Affleck, "Gone Baby Gone") fumbles a detail or General Manager Mr. Simon (Judd Hirsch, TV's 'Taxi') hires a new elevator operator, Enrique Dev’Reaux (Michael Peña, "The Lincoln Lawyer," "30 Minutes or Less"), forgoing Kovacs' strenuous vetting process. If only the screenwriters had put as much effort into the heist itself. The Kovacs/Shaw smackdown is set off when about-to-retire doorman Lester (Stephen McKinley Henderson, TV's 'Law & Order') tries to jump in front of a train. Kovacs learns from Denham that Shaw would have already known he was going down when he took the man's 73K life savings, so Kovacs decides to smash up Forbes's #168's prize Ferrari, which was reassembled in the man's living room, and there is no going back. As Charlie and Enrique were with him, they also lose their jobs and so it is them and Mr. Fitzhugh (Matthew Broderick), a foreclosed upon former Merrill Lynch investor, that Josh makes his proposal to. To get around their lack of criminal expertise, Josh bails out Slide (Eddie Murphy), a hustler who harasses him every morning. There's 20 million that the F.B.I. cannot account for and Josh is certain it's in Shaw's apartment. There's a sloppy generic pall that falls over "Tower Heist," beginning with the unexplained ease with which Shaw is shuttled back and forth - in the third act we even learn the man's about to get away with his crimes entirely - just like the blaring radio which is used to drown out Simon's screams in Fitzhugh's apartment is forgotten when the heist action drops into the same space. The Thanksgiving holiday and the Macy's Parade are used as cloaking devices, but despite the use of Trump International Hotel & Tower and some recognizable balloons (Snoopy being prominent), there is a distinct lack of crowds on those crowded streets. The climactic part of the heist is well staged enough to induce vertigo in those inclined, but its resolution is astoundingly lazy, and the residents' 500 guests and catering demands mentioned as part of the turmoil are reduced to one old lady needing her lapdog walked. It is admittedly entertaining to see a doo-ragged Murphy applying his motor-mouth to a petty criminal equal parts hubris and humility and his one-on-one scene with Sidibe, playing the hotel maid daughter of a Jamaican locksmith looking for a husband to stay in the country, is loaded not only with sexual innuendo but chemistry. It's great to see the Oscar-nominated actress as at home in comedy as tragedy. Leoni's also trying to strike a match, but there's not a lot to spark off Stiller here. Broderick has a couple of low key moments, but Affleck's miscast and Peña has nothing to play off once his character loses his job. Alda is a believable Wall St. snake, but it's a straight role. Hirsch is wasted. "Tower Heist" made industry news when Universal initially had plans to roll it out on PPV at $60 a pop over the holiday weekend - that would have been the real robbery. It's ironic that the film plays as long as the rich are being catered to - once that burglary begins, it's all downhill to a slipshod landing.