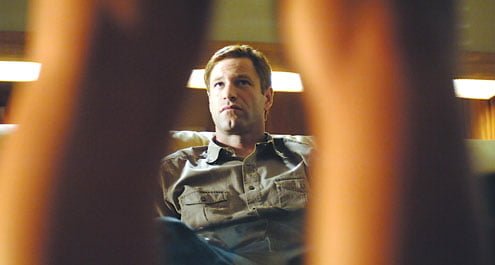 When thirteen year-old Jasira's (Summer Bishil) mother Gail (Maria Bello, "The Mummy: Tomb of the Dragon Emperor") finds out her live-in boyfriend Barry (Chris Messina, "Vicky Cristina Barcelona") suggested he give the girl a bikini shave, she tells her daughter it's her own fault and packs her off to live with her Lebanese dad (Peter Macdissi, HBO's "Six Feet Under"), an engineer in Houston. Dad is verbally abusive, next door Army recruit neighbor Travis (Aaron Eckhart, "The Dark Knight") a pedophile and the ten year old son he hires Jasira to babysit a budding redneck who calls her a "Towelhead."

Screenwriter Alan Ball ("American Beauty," HBO's "Six Feet Under") makes his directorial debut adapting Alicia Erian's novel from a particularly repellant male perspective. Ball may have thought he was going for some envelope-pushing, multi-layered black comedy here, but his Jasira never feels like a real live girl, rather some male fantasy of a sexually precocious teenager, a warped progression of "American Beauty's" cheerleader skewed via Middle Eastern politics. The film's only saving grace is the performance of Peter Macdissi, hilarious in his double standard of strict prudishness as far as Jasira is concerned and irresponsible piggishness when his own libido is at stake. Jasira's dad Rifat is paranoid, suspicious and condescending when neighbors Travis and Evelyn Vuoso (Carrie Preston, "Vicky Cristina Barcelona") along with son Zack (Chase Ellison, "Wristcutters: A Love Story") arrive on his doorstop with a welcoming pie, but he happily announces he has a job for Jasira when they leave. Babysitting Zack, though, is a nightmare as the kid resents being watched by a foreign looking girl only three years older than him. But when Jasira catches him perusing dad's girlie mags, she's hooked too and learns the art of masturbation. When Army reservist Travis catches her, he's intrigued. At her new high school, Jasira is mercilessly taunted with racial slurs and horrified when she discovers her first menstrual flow in a bathroom stall (dad takes her to the store for Kotex pads but forbids tampons as they are only for 'married women'). She also masturbates in class, something every thirteen year old girl would do, just as she would tell her lecherous neighbor his porn makes her have orgasms (not!). Ball tries to add subtext to all this with dueling American flag displays and by having Rifat display his own racism by forbidding Jasira from seeing her new boyfriend Thomas Bradley (Eugene Jones III, coming across as gay) because he's black. Jasira has no problems jumping into bed with Thomas after he apologizes for name calling, and keeps coming on to Travis after he digitally rapes her. Rifat is too busy running after Greek coworker Thena (Lynn Collin, 2004's "The Merchant of Venice," "The Number 23") to notice anything amiss and mom only shows up for Christmas because she's lonely. Jasira's travails are noticed, however, by the other neighbors, liberal do-gooder types Melina (Toni Collette, "Little Miss Sunshine") and Gil (Matt Letscher, "Identity," TV's "Eli Stone') who stand up to both Travis and Rifat but fumble when Thomas comes to visit. One wonders what usually astute actresses like Maria Bello and Toni Collette saw in this material. Eckhart, at least, can blame immunization via Neil Labute. In the lead, Summer Bishil never makes us root for Jasira because Ball has her acting so repugnantly - her idea of girlish reverie is to imagine herself in a photo shoot for one of Travis's nudie spreads. This is a film that symbolizes both the loss of innocence and racism with the tragic, violent death of a white kitten named Snowball which the guilty Rifat stows in his freezer.