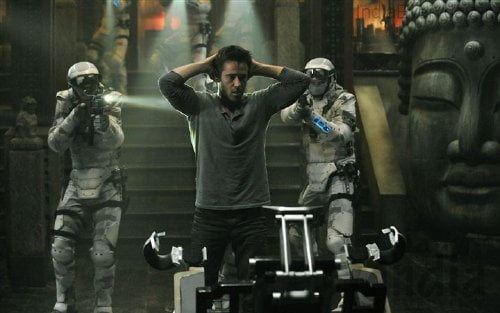 Factory worker Douglas Quaid (Colin Farrell, "In Bruges," "Fright Night") goes to Rekall to spice up his life with a memory implant, but when things go wrong he discovers that what he though was his reality was manufactured. Now, as he's hunted by the United Federation of Britain's Chancellor Cohaagen (Bryan Cranston, AMC's 'Breaking Bad') and aided by underground rebel Melina (Jessica Biel, "The A-Team"), he has to fight for "Total Recall."

Now here's a film that really could have been ripe for a remake. The Arnold Schwarzenegger/Paul Verhoeven version was campy, sidetracked the Philip K. Dick short story “We Can Remember It For You Wholesale” with a trip to Mars and had 1990 state of the art f/x. But although director Len Wiseman's version sticks closer to the source (adapted by Kurt Wimmer ("Salt") and Mark Bomback ("Unstoppable"), the creator of the "Underworld" series has made a a dreary looking action flick short on logic and human connection. Wiseman's presumably treating the material seriously, yet it has no weight. This story should be about how people are defined by their memories, but what's pushed to the forefront here are chase and combat scenes. This is the end of the 21st century after global chemical warfare has destroyed most of earth's livable area. An attempt has been made to connect to today's headlines with the United Federation of Britain equated with the 1% who use and hold down everyone who lives in The Colony, a much larger land mass (Australia as identified here), but it's merely an additional layer of window dressings. Once Douglas's home and work life have been established (he manufactures synthetic policemen for the UFB, commuting daily on 'The Fall,' which whips through the earth's core, from The Colony), the visit to Rekall he's been mulling over becomes a possibility when he gets home and finds his wife's gone to bed early. He's been told to ask for Mac (John Cho, "A Very Harold and Kumar 3-D Christmas"), who makes several suggestions, including an adventure as a spy, perhaps even a spy for the United Federation of Britain's arch enemy Matthias's (Bill Nighy, "Underworld") resistance movement. With hit us over the head exposition, McClane explains that Douglas cannot choose a memory that is true, like an episode with a mistress if he actually has a mistress, because that would overload his brain. Of course, once the process has started based on his suggestion, McClane discovers something Douglas doesn't even know. To his astonishment, Quaid, with deadly skill, takes out a number of men and machines who have come to arrest him. At home, wife Lori (Kate Beckinsale, "Underworld") acts sympathetic before trying to take him out, given as her job is with Cohaagen's special security police. On the run, he's rescued by a woman he's seen in his dreams (Biel). Farrell doesn't really bring much to the table here, no real anguish or moral confusion, nor does he have chemistry with either his fake wife or his is-she-real lover. Biel, who should at least be physically imposing, is too soft. The only real excitement is provided by the ferocious Kate Beckinsale, one of the few smaller actresses who can deliver a convincing ass-kicking. She's like the terminator. Neither Cranston nor Nighy apply much conviction in roles that are destined to be filmography padding fodder. The UFB has little personality, London somewhat recognizable under structures that soar into and float in the sky, but The Colony is one more Blade Runner ripoff, an Asian environment with cubist Hong Kong inspired living quarters under a constant deluge of rain (can't anyone incorporate global warming into the future?). Cars travel as they have since "Metropolis" and Besson's "The Fifth Element." Some of the effects look pretty cheesy - a long shot of Lori chasing Douglas across rooftops just made me think about the matting process. Harry Gregson-Williams's ("Unstoppable") score is as generic as they come. What's most annoying about the film, though, over its tediousness, is some of the utter lapses in logic. Did the filmmakers think that enough flash and dazzle would make audiences not notice such things as a video in a safety deposit box that was impossible to place there or the ease with which Douglas leaves a police chase car crash carrying a comatose woman through the streets of the UFB? I was never a big fan of the Schwarzenegger version, but at least I remember it. This "Total Recall" is instantly forgettable.