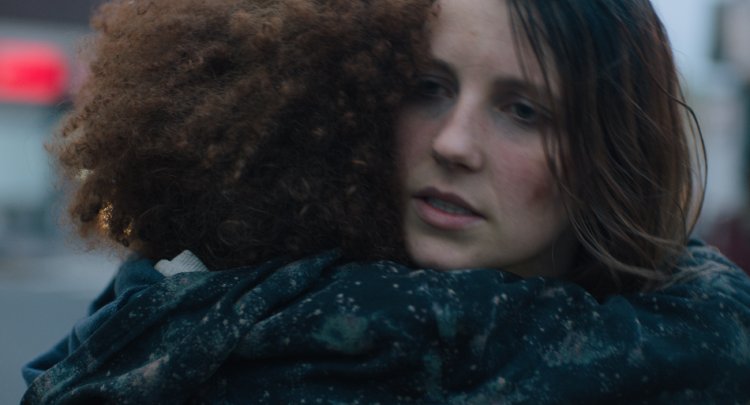 In the abandoned, underground NYC subway tunnel named for the graffiti artist, Freedom, whose murals characterize it, live an imaginative 5 year-old, Little (Zhaila Farmer), and the addicted mother, Nikki (Celine Held), who loves her dearly.  But while hoping and waiting for a better life in a more traditional, aboveground dwelling, the homeless mother and child are cleared out of the home they’ve made and Little is terrified by the noise and chaos “Topside.”

After researching their subject in documentary form and reading books like Jennifer Toth's ‘The Mole People,’ writer/directors Logan George, who also edited, and Celine Held, who also stars, had their feature debut appear in the Venice Film Festival’s critics’ week and win a special jury prize for direction at SXSW 2020.  It is easy to see why this small independent has made such a big impression.  While reminiscent of many films ranging from “I, Daniel Blake” to “Heaven Knows What” and even the disorienting effects of “Clean, Shaven,” “Topside” is nonetheless its own take on the heartbreak of a homeless mother’s increasingly desperate attempts to care for her child told with cinematic artistry.

We are introduced to Little staring upwards through a shaft of light, convinced she is seeing stars.  She brings home a trinket, an abandoned filigree earring, which Nikki adds to the collection dangling from their ceiling.  When Nikki leaves to scavenge for supplies, Little is cared for by Lolly (Cynthia Tombros) or John (hip hop musician Fatlip).  But while John’s been supplying Nikki with drugs, he’s also invested in Little’s future (is he her father?) and is dismayed by the young girl’s stumbling over basic math questions.  John tries to force the issue, walking right into the hands of city officials trying to clear the tunnels, but Nikki grabs Little and runs, surfacing at an active train station.

Little, used to a darkness whose echoing silence is only broken by the far off shouts of the mentally ill and rumbling of trains, devolves into sheer terror when mom takes her onto bustling city streets, sobbing as Nikki makes her way to the only shelter she knows, the apartment of the less-than-welcoming drug dealer Les (Jared Abrahamson, "American Animals").  There is a sordid history here, a past Nikki falls right back into, and while it appears that Les is bonding with Little in her absence, he is really concocting an even more heinous plan.  Nikki flees once again, but her situation worsens when she’s separated from Little boarding the subway and any attempt to get help will involve the authorities she’s been so assiduously avoiding.

Every element of the production is outstanding, Held having found a tunnel in Rochester in which to recreate the Freedom tunnel, its namesake artist embellishing it with murals.  Director of photography Lowell A. Meyer ("Greener Grass") allows us to ‘see’ in the dark, his handheld camera work becoming more chaotic in the light where editing and sound design add to the experience of Little’s terrifying sensory overload.  Original music by David Baloche is elegant and mournful, even eerie at times.  But without the belief we invest in Held and Farmer, the film would never work and the filmmaker and her young charge are heartbreakingly real.  In the end, “Topside” will gut you with the immense pain of a mother’s love.

There is a subculture in New York City that lives and survives in the abandoned subways beneath the city. Nikki (Celine Held) and her 5-year old daughter Little (Zhalia Farmer) are two of those mole people residents, but the intrusion of city officials puts them on the run and forces them “Topside.”

Tyro co-directors and co-scripters Logan George and co-star Celine Held tell the story of a mother’s love and fierce protection of her child under the worst possible circumstance. Held envelopes herself in the role of Nikki, a desperate young woman who will do, literally, anything for little Little. How their plight ends breaks my heart.

Zhalia Farmer is a marvel as Little and, with Celine Held’s obvious affection and guidance, gives a gut-wrenching little character performance. How the filmmakers elicit such a powerful perf from a 5-year old amazes me and the mother/daughter pair garner lots of sympathy. “Topside” is a small budget indie film with a load of heart and soul.

Vertical Entertainment releases “Topside” in select theaters and on demand on 3/25/22.