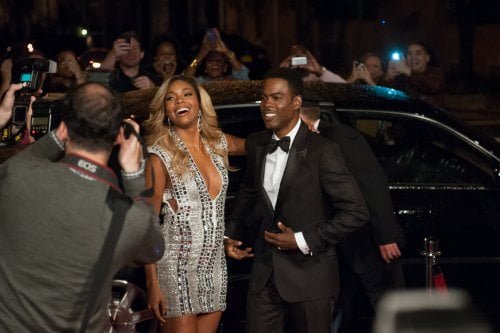 It's his latest film's release date and Andre Allen (Chris Rock) is trying to change his image. The stand up comic known for his 'Hammy the Bear' franchise wants to be taken more seriously by portraying Haitian slave rebellion leader Dutty Boukman in "Uprize!," and he's juggling promotional duties with his impending marriage to reality star Erica (Gabrielle Union, "Think Like a Man Too") while being tailed by New York Times reporter Chelsea (Rosario Dawson, "Sin City: A Dame to Kill For") in "Top Five."

Writer/director/star Chris Rock ("Head of State," "I Think I Love My Wife") casts a wide net for his hilarious, soul searching day-in-the-life of a black entertainer trying to change his stripes while keeping one foot in the Hollywood machine. The basic outline of Rock's script is standard romcom - two people with ties to others meet, try and fail to overlook their obvious attraction only to surmount the third act obstacle of a lie of identity - but Rock uses it to examine show biz, celebrity, addiction, discrimination and family in painfully funny fashion. It's Rock's hip hop homage to Woody Allen and his own stand up roots. Using Chelsea's 'interview' (she begins by talking about herself more than asking about him, a device to flesh out her character) allows Rock to keep his hectic day moving forward while using flashbacks to illustrate answers to her questions. Her first heavy one - 'What was your bottom?' - leads to one of one of his funniest recollections. In 2003, the still up-and-coming Andre went to Texas where he's shepherded about by Jazzy 'I'm the m&*%er f&*%in' man in Houston!' Dee (Cedric the Entertainer). It all ends in a humiliating drunken feathered orgy. After a stop to record a radio promo and do a live interview, Andre swings by the old neighborhood where he's promptly called by shouts of 'Hollywood!' by four old guys, one of whom (Ben Vereen) hits him up for cash. It's not until they're walking away that Allen reveals it was his dad. The family, including his regretful ex (Sherri Shepherd, "Think Like a Man"), are thrilled to see him and game for a round of top five, Rock's titular running gag that defines folks by their choice in rappers ('If Tupac were alive today he'd be a politician.' 'Or the bad, dark-skinned boyfriend in a Tyler Perry movie - he might be kicking Jill Scott down the stairs.') Allen's "Uprize!" not only looks awful, it's going up against the latest (fictional) Perry movie 'Boo,' in which Madea navigates a haunted house, but it's not until Andre witnesses a a rapper trying (and failing) to change his tune that his own professional truth dawns. His personal truth, ripped right out of Kanye and Kim headlines, comes when he stops to pick up his wedding rings only to discover Erica's changed them because the ones they chose together weren't right for reality cameras. Rock's comedy can bite, but it's not vicious, as evidenced by the sympathetic moment the writer/director gives Erica voicing her own insubstantiality. He takes on race with cinematic references, getting 'serious' by starring as a man who instigated the deaths of 5,000 whites or theorizing that it was no coincidence that Martin Luther King was assassinated the day after "The Planet of the Apes" premiered (in 'real' life, when Andre tries to show Chelsea how impossible it is for a black man to hail a cab, the second one stops). The central romance is a comedic raunch hybrid, the artistic Chelsea pretty unfiltered (Dawson goes where few have gone before flashing back to her unusual sex life with Brad (Anders Holm, TV's 'Workaholics')). Rock uses a street game of Double Dutch for a charming montage that illustrates Andre's insecurities and Chelsea's fearlessness. It's also a bit of New York City color in a film that embraces the varying neighborhoods of the Big Apple. The film is simply packed with supporting players and surprise cameos from some of standup's biggest names. Kevin Hart is Andre's fast-talking agent, J.B. Smoove his PR guy, Romany Malco Erica's manager. The cast also includes Tracy Morgan, Michael Che, Taraji P. Henson and SNL's Jay Pharoah and Leslie Jones. "Top Five" is refreshingly honest and enormously entertaining. By going back to his roots, Rock has revitalized himself as a feature filmmaker. Grade: