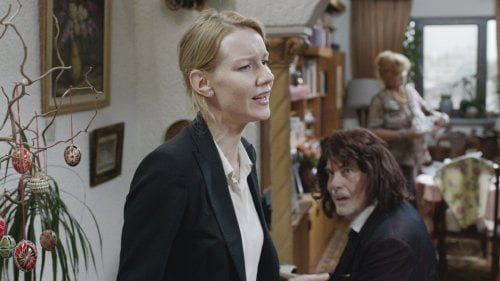 On a brief visit home from her job as a corporate strategist in Bucharest, Ines (Sandra Hüller, "Requiem") doesn't have much time for her father, Winfried (Peter Simonischek), when he shows up at her mother's house. After his beloved old dog Walli dies, Winfried spontaneously visits Ines when she's busy juggling client needs. He agrees to leave, but Winfried is determined to break through his daughter's joyless workaholic lifestyle, so he dons a crazy wig and false teeth and returns in the guise of her CEO's life coach, "Toni Erdmann."

Writer/director Maren Ade's ("Everyone Else") generational comedy is like a bizarre game of chicken, Ines's prankster dad pushing all her buttons until she finally recognizes the absurdity of her priorities. Along the way he will take actions that return Ines to her childhood, opening her eyes to the familial love she's treated as an obligation and true introspection on just why she's so unhappy. Hüller and Simonischek work wonderfully together, conspiratorial adversaries whose dance steps draw them ever closer. We first meet Winfried goofing on a delivery man, irreverent fun his approach to life. He checks in on his mother, whom his daughter did not have time to visit. When he arrives at her workplace in Bucharest, Ines sends her assistant, Anca (Ingrid Bisu), to deal with him, inviting him to attend a reception with his daughter at the American Embassy that evening. Winfried subverts Ines's plans for impressing her client Henneberg (Michael Wittenborn) by turning the focus to family. All weekend, Ines has little time for her father but he nonetheless disrupts her fastidious planning. He leaves, his birthday gift of a cheese grater the only reminder of his presence. But that very evening as Ines is recounting 'the worst weekend of her life' to friends Steph (Lucy Russell, "World War Z") and Tatjana (Hadewych Minis, "Borgman") at a club, Toni Erdmann enters the scene. Ines plays along and her friends are amused by this stranger. He shows up everywhere, Ines's boss Gerald (Thomas Loibl) even suggesting Mr. Erdmann accompany her on a site visit where she hopes a foreman will fire most of the employees Henneberg wants to cut so that she doesn't have to. Dad, of course, makes friends with them, then diverts his daughter to a friend's home to celebrate such things as egg painting and singing. We realize Ines is beginning to come around when she lets loose with an impassioned cover of Whitney Houston's 'Greatest Love of All'). Toni literally transforms himself into a huge plushie by borrowing a kukeri costume (used to drive off evil spirits). The film's climax, Ines throwing her own birthday party, is an unexpected knockout. Hüller creates an easily recognizable character in Ines, the 'all business' career woman whose work consumes her existence. The actress conveys confident professionalism, yet she allows us to see the many things which haunt and disappoint her, the inner emptiness Winfried has picked up on. Even a tryst with her lover Tim (Trystan Pütter, "War Horse," "Phoenix") is cool, a woman outwardly 'having it all' with no real, human connection. Simonischek gets up to all kinds of mischief with the type of deadpan expression that makes others question his seriousness. His big heart and shuffling figure are endearing even during those instances when he's making us cringe along with Ines. Running 162 minutes, "Toni Erdmann" never flags, the German comedy an inventive study of a father daughter relationship. Ade caps her subversive, paternal therapy bombardment with a reminder to stop and smell the roses before they're gone. Grade:

Winfried (Peter Simonischek) and his daughter, Ines (Sandra Huller), have grown apart over the years. She works as a corporate consultant in Bucharest and her dad, after the death of his beloved dog Willi, decides to pay her a surprise visit. It does not go well and Winfried leaves for home, only to resurface in his daughter’s life as “Toni Erdmann.” This is a strangely likable story about a father and daughter, estranged for years, who find and understand each other in the end. But, the quirky character of Toni, Winfried’s alter ego, makes the re-bonding experience of dad and daughter quite unique. I cannot think of another rekindling-family-ties film that follows the oddball direction of “Toni Erdmann,” by director-writer Maren Ade. The humor of “Toni Erdmann” stems from one thing: the absurdity of Toni Erdmann, with his bad suit, equally bad wig and novelty store teeth. He announces to Ines’s colleagues that he is her boss’s life coach. The funny thing is, everyone buys it! As the story unrolls and Toni intrudes more and more into his daughter’s life, you see he is trying to point out the absurdity of Ines’s life with his own brand of absurdity. He mocks her constant business phone call and meetings, ingratiates himself to her boss and no one seems to notice the aforementioned, bad suit, bad wig and phony teeth. I think it is Peter Simonischek’s off the wall performance that make’s “Toni Erdmann” a cut above just quirky.