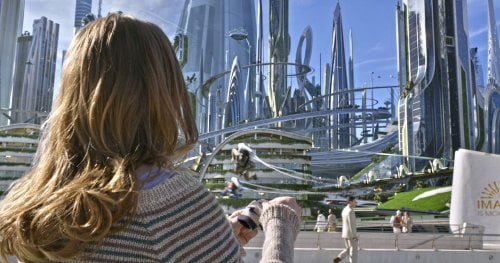 With her engineer dad about to be laid off from NASA, which is dismantling its launch platform, Casey Newton (Britt Robertson, "The Longest Ride") tries to keep hope alive by disabling the cranes at the platform site. All this does is land her in jail, but when her dad (country music star Tim McGraw) bails her out, a mysterious enameled pin is mixed with her belongings, one capable of transporting her to a Utopian future in another dimension called "Tomorrowland."

Cowriter (with coproducer Damon Lindelof, TV's 'Lost')/director/Brad Bird has had an incredible streak with "The Iron Giant," "The Incredibles," "Ratatouille" and "Mission: Impossible - Ghost Protocol," so what went so disastrously wrong here? This Disney release named for its 1955 Disneyland attraction is intended to inspire us to get to work reversing the havoc we have wrecked on our planet before it's too late, but the movie is a slog to sit through. It feels dated visually, its narrative is spotty and its characters too broadly defined. On the whole, "Tomorrowland" plays like "Interstellar" for 8 year-olds with Disney's animatrons thrown in for no discernible reason. When Casey touches that pin, she finds herself in a wheat field, a futuristic city in the distance (just like Oz), but her movement is impeded by real world obstacles she can no longer see (this conceit is abandoned once its comic uses have been tapped). It doesn't work when she hands it to her dad and so she cycles off at night to find the best spot to regain entry. Amazed by a city of monorails, multi-dimensional swimming pools and jet packs, she's about to join a group blasting off to journey 20 light years when it runs out of power. Her search for a new pin leads her right into the clutches of the robot force dispatched by Tomorrowland's Governor Nix (Hugh Laurie, TV's 'House') to keep people out, but she's saved by a young girl, Athena (Raffey Cassidy, "Dark Shadows"), the same one we saw offering a young boy (Thomas Robinson, "The Switch") a pin at the 1964 New York World's fair against Nix's wishes. Athena, we learn, is also an animatron and she's intent on connecting Casey with Frank Walker, that young jet pack enthusiast, now a cynical inventor (George Clooney) who wants nothing to do with either of them. But Casey outwits him, gaining entrance to his booby-trapped abode where she finds evidence of his young crush on Athena and a Doomsday machine tracking the world's disasters (climate change, overpopulation, etc.) which is counting down at an alarming rate. When Frank gets back in, he notes a flickering change in one of these scenarios which can only be attributed to Casey's involvement and so with the tiniest bit of hope renewed and Nix's robots on their heels, he transports himself along with Casey and Athena to a secret chamber in the Eiffel Tower, their last stop on a return to Tomorrowland. Robertson spends the entire film being awed and spunky, wondering along with us just why she's been deemed so special (she dumbfounds her teachers asking how to reverse global disasters and generally 'knows how things work'), but Tomorrowland's awe-inspiring inventions all feel recycled from other, better and interestingly, much older films ("Back to the Future" and "Westworld" come to mind along with anything influenced by Jules Verne). Clooney gets off a wisecrack or two, but he's never seemed more vanilla than he is here. Laurie, too, is bland, a villain from a sci-fi cartoon. Maybe the film really is being pitched at third graders because only the child actors - Cassidy, Robinson and "Looper's" Pierce Gagnon as Casey's little brother - have any real personality. As the most notable adult animatronics, Kathryn Hahn ("Bad Words," "The D Train"), Keegan-Michael Key ("Pitch Perfect 2") and Dave Clark offer some amusing menace. "Tomorrowland" is corporate family fare masquerading as higher minded science fiction. In line with its optimism trumping pessimism theme, one can only hope this will be but a blip on the radar of Bird's filmography. Grade: