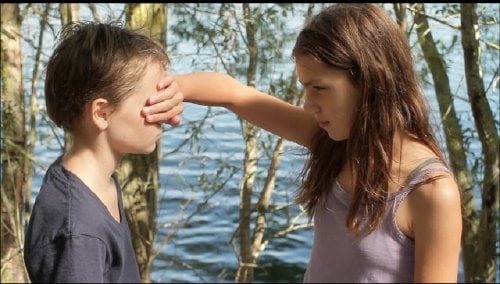 10-year old Laure and her family move into a new home in a new town. Lanky, boyish-looking Laure decides that she likes the idea of acting like a boy and introduces herself to the neighborhood kids as Mikael. But, as the school year approaches, this innocent deception will soon snowball out of control for the young “Tomboy.”

Celine Sciamma's ("Water Lilies") sophomore film once again uses a female protagonist to explore gender identity with "Tomboy," in which Laure, having moved to a new town between third and fourth grades, uses her newcomer status to pass herself off as Mikael when she meets her first new friend, Lisa. Sciamma's tale is a simple one of how Laure blossoms in her new role and how it becomes increasingly difficult to hide her lie - we don't, for example, get deep enough into her psyche to know if she completely rejects herself as a girl - but this simple approach allows Sciamma to delve into the truth as seen by 5-10 year olds and these kids are terrific. Laure enjoys supportive parents and a particularly close relationship with her little sister Jeanne who eventually gets pulled into her charade. Young Zoe Heran is remarkable, adopting the subtlest macho poses and postures (watch the way she tosses her head when asked to dance by Lisa), a real chameleon.

Sophomore director and screenwriter Celine Sciamma tells an original coming of age story that is also a fascinating character study of the life of a young girl who, not realizing the repercussions, decides to introduce herself in her new neighborhood as a boy. What is fascinating about this simple story is the way that the filmmakers capture the look, feel and energy of being a kid in small town France. Think of this as an adolescent “Boys Don’t Cry” (without any of the sexual preference angst and violence) and the bucolic childhood memories of “Stand By Me” (without the dead body). Celine Sciamma is a sure handed writer who understands what it means to be a child living in a safe, sunny world open to exploration. When the “gang” of neighborhood kids is shown, it reminded me of growing up in the ‘50s and my own gang of friends. Director Sciamma also shows remarkable talent in marshalling the many kids in the film and showing them in a natural, exciting exploratory world of childhood. Zoe Heran, as young Laure/Mikael, gives a astounding breakthrough performance and has a face that the camera loves. The newcomer possesses an assured nature that comes through in the strong-willed Laure. The scenes with Mikael playing and rough-housing with his new friends feels realistic, especially with his new best friend Lisa (Jeanne Disson). Laure taking care of, playing with and protecting her six-year old sister Jeanne (Malonn Levana) rings true, especially when Mikael, in an act of chivalry, stands up to a bully who pushed down little Jeanne. This is not the kind of film that has action, thrills or chills. It is a quiet slice of life movie that should appeal to kids everywhere, despite its innocent issue of switching genders. Unfortunately, American kids are not very likely to see “Tomboy” and that is a shame. It is a beautifully crafted, lyrically flowing story about childhood and growing up. The theme is mature with the innuendo of gender choice (but, just because Laure has fun playing a boy, it does not mean that she wants to be a boy), though those more narrow-minded may find the gender issue offensive. But, they would be wrong. Celine Sciamma is a filmmaking force to be reckoned with in the coming years. Her story-writing ability, deft hand at directing and understanding of her young actors makes her someone to watch. I know that I will.