Tom Dowd & the Language of Music 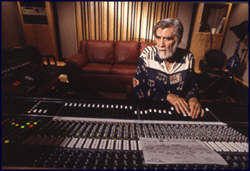 Those familiar with the musical development of the Beatles have always known that George Martin was a driving, creative force behind that most famous band. While I have heard of Tom Dowd, I wasn’t expecting to learn that he had more influence over more musicians for a longer time than Martin could ever wish for. Docu-maker Moormann, with the help of the above mentioned friends and fans of Dowd, tells the story of this true legendary figure that made a lasting impact on jazz, R&B and rock music. The sheer numbers of talented people hailing Tom Dowd is impressive unto itself. And, every player sings the highest praises for the man. But, the attraction to the subject and his music is Dowd himself. The engineer turned producer provided interview material for Moormann from 1996 until his death in 2002 and the incredible numbers of singers and musician he aided over decades is most impressive. The filmmakers show Dowd’s innovation and shrewd understanding of the music scene and the impact he had upon it. You would have to hate music not to find something to like in “Tom Dowd & the Language of Music.” The interviews are numerous and informative; the music that he influenced is given good shrift from the jazz greats like Coltraine and Monk to Cream, the Allman Brothers and the queen of R&B, Aretha. It is a solid, entertaining and educational documentary that has something for nearly everyone.