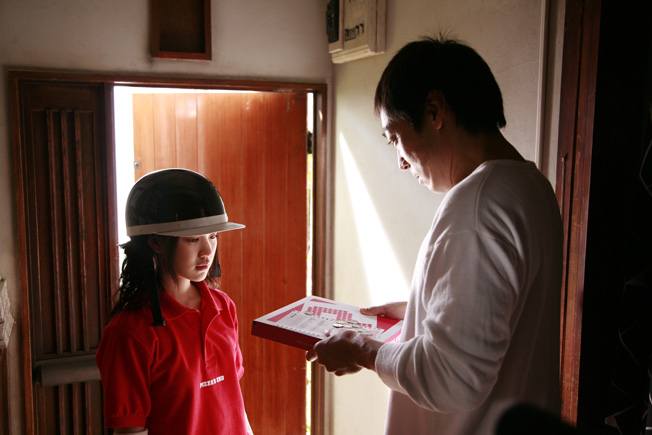 Three very different directors – Michel Gondry, Leos Carax and Bong Joon-ho – travel to the land of the lotus blossom to lend their collective eyes to a world that is “Tokyo!”

"Tokyo!" is an odd little omnibus that, say, unlike "Paris Je T'Aime," doesn't necessarily give its audience a real flavor of the city it is centered around. Of course, the Parisian collection was made up of eighteen different segments, whereas "Tokyo!" is made up of three, and of those three, two are from French directors and the third from a Korean! The three directors themes are a more global take on urban alienation than anything too specifically Japanese. That and odd asides on dead cats. I have found every film Michel Gondry ("Be Kind, Rewind") has directed from his own screenplay lacking and 'Interior Design,' the first short, is no exception. Initially about a couple who bunk in with a friend in a ridiculously intimate living space, the film becomes more about how the woman 'disappears' in the shadow of her boyfriend's art. Gondry is a great visualist, and he impresses here with a faux pretentious art film; a trip to retrieve a towed car, or at least its contents, from a belligerent bureaucrat and with his female protagonist's literal disintegration. Those spindly wooden legs are an inspiration worthy of Lynch. B- Leos Carax's ("The Lovers on the Bridge") 'Merde' is the most intellectually intriguing of the three pieces. Denis Lavant is a hideous, troll-like creature who lives in Tokyo's sewers and comes aground to irritate its denizens by stealing cigars out of their mouths, food out of their hands, etc. When he finds a cache of WWII grenades and begins lobbing them gleefully around the city, causing death and destruction, he's hunted down and put on trial for his life. A lawyer emerges who can 'speak his language.' Perhaps a statement on Japan's insular society, Carax's film is both funny and profound, but it is also self-indulgent and would have made a stronger impact if he hadn't subjected his audience to lengthy, unsubtitled, sequences of babble. Lavant's mighty good at it though. B- Joon-ho Bong's ("The Host") piece closes and it is the most satisfying overall. A hikikomori is the name given urban hermits in Tokyo and here we have one who hasn't left his apartment in years. He orders food in and never meets the eye of anyone who comes to his door. Until one day, the woman who has been delivering his weekly pizza makes herself seen and he falls. But just when he is ready to reengage with the outside world, the outside world goes on hikikomori on him. Art direction is terrific here, the detritus of hundreds of take-outs made into almost art installations, the abandoned streets of Tokyo as eerie as in any zombie film.

Michel Gondry leads the pack in this Tokyo-based three-parter with his yarn about a young filmmaking couple who come to the city to find their fortune. They intrude, temporarily they promise, on a friend, a young woman with a tiny apartment who, being polite, invites them to stay. With no prospects of work or an apartment, the couple’s presence soon turns things tense. Then, things get weird as one character turns into a chair. But, the weirdness is intriguing. C+ Leos Caras is second up with his Godzilla allegory about a troll-like creature that lives in the sewers of Tokyo. Without warning, anytime and anyplace, the beast rises from a manhole and proceeds to terrorize the citizens of the city. The authorities arrest the odd little man (Denis Lavant) and bring him to trial. But, no one can understand him – except for one other. The trial of the century takes an odd turn when hand grenades come into play. Caras’s invention of a new language for the troll is clever, though indulgent. B Bong Joon-ho finishes the triple play with the story of a man, a hilkomori or hermit, who has secluded himself for 11 years without eye-to-eye contact with another soul. This changes, one day, when two things happen – a pretty pizza deliver girl shows up at his doorway and an earthquake hits. This one-two combination brings out an odd little story where pushing someone’s buttons can be a good thing. B- Overall.