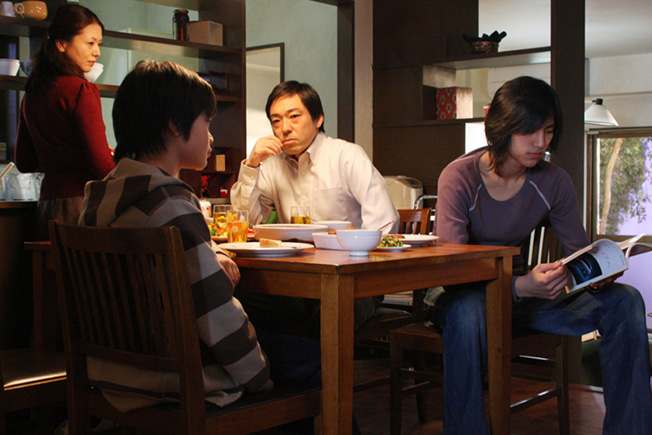 Ryuhei Sasaki (Teruyuki Kagawa) is a middle management administrator at a large Japanese medical equipment company. He is called into his boss’s office and told that he has been downsized. He is unable to tell his wife, Megumi (Kyoko Koizumi), the bad news and pretends that he is still gainfully employed. Living a lie begins to impact Ryuhei and his once stable family life falls apart in “Tokyo Sonata.”

Writer/director Kiyoshi Kurosawa, known for horror thrillers like the Kôji Yakusho starrers "Cure" and "Pulse," steps out of his usual realm with his expose on the breakdown of traditional Japanese values. With his static camera and mid to long shot family compositions, Kurosawa tips his hat to traditional Japanese filmmakers like Ozu, but Kurosawa makes "Tokyo Sonata" his own with fantastical elements in his third act. Ryûhei Sasaki (Teruyuki Kagawa, "Sukiyaki Western Django," "Tokyo!") loses his job to Chinese outsourcing and is shocked by the current job market, where the former senior administrator is offered positions like managing a convenience store (Hello Work is the cunning name of his career center). Ryûhei plays the age-old game of pretending to go to work, where he meets old friend Kurosu (Kanji Tsuda, "One Missed Call") who has upped the ante by programming his cell to ring five times an hour, giving the illusion of a high stress career (the character of Kurosu is used to illustrate the horrific path Ryûhei could have taken). The stress causes Ryûhei to act out with his family, so when young son Kenji (Inowaki Kai) wants to take up piano, he's harshly forbidden and when teenaged Takashi (Yû Koyanagi) looks for permission to join the American military, he's thrown out of the house. Loving wife and mother Megumi (Kyôko Koizumi) tries to hold things together, but ends up siding with sons over father. So here we see the classic salaryman laid low, the subservient Japanese housewife make a stand and an idealist soldier lose faith. They all attain redemption with shaky hope for a new, revised future after Megumi is kidnapped by a depressed, failed businessman (Yakusho), sees a new life, but returns to the old one. Although Kurosawa is able to balance tones ranging from humor to unexpected domestic violence, his fantastical transition comes a wee bit left of field, requiring his audience to regain their equilibrium. The final, climatic performance of Debussy's "Clair de Lune" is cathartic.

This is a telling film in this time of worldwide economic problems where unemployment is a real issue affecting families everywhere. Director Kiyoshi Kurosawa, with co-scribe Sachiko Tanaka from a story by Max Mannix, takes this now universal issue and pares it down to the plight of the Sasaki family – father Ryuhei, mother Megumi and sons Takashi (Yu Koyanagi) and Kenji (Inowaki Kai). Ryuhei lives a lie following his dismissal from his company, keeping the bad news from his family. He tries to hide his shame by leaving for his “job” every day and spends his time trying to find work at the Hello Work job placement center – along with all the rest in the same predicament. Megumi is in the dark over her husband’s plight and lives as she always has, shopping for a new family vehicle but falling in love with a little red sports car. On her way home from the dealer, she is shocked to see her husband in a soup line for the poor. She is also confronted by Kenji’s teacher, who tells Megumi that her son is in arrears with his lunch money and, frequently, leaves school early. When she confronts the boy, he tells her that he used the money to pay for the forbidden, by his father, piano lessons. Kenji, it seems, is a savant at the piano and should be in music school, not just regular junior high. Takashi, nearing 18-years old, announces to his mother that he wants her to sign the permission papers that will allow him to enlist in the US military. She defers to Ryuhei who refuses to sign. Takashi tells him that he wants to protect his family while Ryuhei says that is his job. Takashi declares that he does not want his father’s protection, knowing more than suspected of Ryuhei’s joblessness. Takashi gets his way and ships out for the army. These varied stories of this tiny, disintegrating family is given a strange turn when Megumi is assaulted in her home and tied up by a masked thief (Koji Yakusho). But, as he tries to make his escape, nearby sirens drive him back into the Sasaki home, sans mask. Now that Megumi can identify the thief, he decides to kidnap her and forces her to drive the getaway car, the same model that she fell in love with. A bond soon develops between these two disparate souls. As the Sasaki family’s modern day parable unfolds, and the thief enters the scene, things start to unravel for “Tokyo Sonata” and things get confused. However, during the last third of the film, things snap back in place and we see there lives find a new and different level for the family. Their former prosperity is a thing of the past but their new life takes on contentment for each of the Sasaki’s. The world’s problems are put in place and the little clan enters a new era. The director marshals his cast and crew with a deft hand. Lensing, by Akiko Ashizawa, is mostly done without the use of close-up and the static camerawork is anything but stodgy. The Tokyo locale has a could-be-in-any-major-city feel that the viewer can readily identify with. Other techs are done equally well. Kurosawa effectively depicts the present world financial crisis with his microcosmic analysis of the Sasaki family. Their plight is universal and the Max Mannix story could take place anywhere in the modern mechanized world. As such, the appeal of “Tokyo Sonata” should translate to audiences anywhere who can identify with the family’s dilemma – and many will.