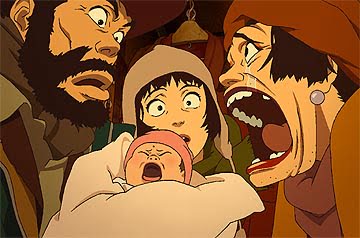 Christmas in Tokyo. Three homeless people, Gin (voice of Toru Emori), an alcoholic ex-bicycle racer, Hana (voice of Yoshiaki Umegaki), a disenchanted ex-drag queen, and Miyuki (voice of Aya Okamoto), a runaway adolescent, are celebrating the special day together. While rummaging in the trash for their presents the trio hears the muffled cries of a baby. They dig into the pile of garbage and rescue a tiny, angelic child. Hana declares the baby a Christmas miracle and wants them to keep and raise the child. Cooler heads prevail and they decide to return the baby they name Kiyoko to her parents but must scour the landscape to find them in “Tokyo Godfathers.” Robin: Anime director Satoshi Kon, who gave us last year’s marvelous “Millennium Actress,” has created a work of art that should become a staple for Christmas holiday viewing a la “A Christmas Story,” “It’s a Wonderful Life” and “Scrooge” (the 1951 Alistair Sim version of Charles Dickens “A Christmas Carrol”). “Tokyo Godfathers” parallels John Ford’s western classic “Three Godfathers” and this is not a bad thing in my mind. But this newest version of the often told tale of three anti-heroes who take the responsibility to save a baby provides its own unique spin on the story. Gin claims to have lost his wife and daughter many years before, turning to the bottle and becoming a homeless bum. Hana, a woman in a man’s body, left her job as a drag queen entertainer after a terrible incident and has joined Gin in vagrancy. Miyuki, the youngest of the trio, has a mysterious past and is far too angry for a young teen to be. When they find little Kiyoko, Hana’s Christmas miracle, the trio is galvanized into action to unravel the clues they uncover to find the baby’s mother, whom they know by the name Sachiko (voice of Kyoko Terase). Armed with their scant information, the homeless trio and their diminutive ward press on across Tokyo to rejoin mother and daughter. Along the way, they have all manner of adventures, at one point saving the life of a crime lord who brings them to his daughter’s wedding. An assassination attempt, kidnapping, a bigoted beating, exciting chases, attempted suicide, angels, freak accidents, miracles and an odyssey that would make Homer proud are all part of our heroes story. Homeless people are not the usual subject for films. There are some, like “Down and Out in Beverly Hills” and “My Man Godfrey,” but, still, not exactly a popular subject. Satoshi Kon builds a truly incredible journey, physically, mentally and spiritually, that uses humor – even resorting to slapstick – to tell a serious story. The amazing trek is interspersed with the past stories of each of the triumvirate of Kiyoko’s protectors. Gin is tormented by his guilt for failing as a husband and a father whose gambling eventually forced him to flee his familial responsibility. Hana’s temper got her in trouble when she assaulted a customer during her act. Miyuki also committed a terrible deed that forced her, at least in her own mind, to run away from home and live a vagrant’s existence. This little “family” is made full with the arrival of little Kiyoko who may, indeed, be the angel that Hana proclaims her to be. Gin takes responsibility for the first time in his sorry life. Miyuki learns important lessons and Hana gets to be the mother she dreamed of being, if only for just a little while. “Tokyo Godfathers” is the kind of film that has you rooting for a happily-ever-after ending but the adventures the protagonists face and obstacles they must overcome in their quest are the meat of the story. The animation has the look of the old rotoscope technique – live action film traced one frame at a time – as the characters move with realistic fluidity but the advent of computer-generated imagery (CGI) is the likely anime method utilized by Kon and company to accomplish the look of “Tokyo Godfathers.” The color palate of the animation is in stark, darker hues, befitting the Tokyo winter setting, and has the look and feel of a mobile camera shooting the action. The vocal talents involved in this production help to flesh out the animated characters completely. “Tokyo Godfathers” is one of those rare little gems of a film that comes along only very occasionally. Though its style is completely different, the film has the same level of charm and diversity as last year’s terrific French animation, “The Triplets of Belleville.” Not bad company to be in. I give it an A-.

Homeless Hana (Yoshiaki Umegaki) is an ex-drag queen who prays for the miracle of her own baby after attending a Christmas Pageant. Lo and behold, when Hana and her makeshift family of Gin (Toru Emori), an alcoholic ex-bicycle racer and Miyuki (Aya Okamoto), a young runaway, root through the trash to gift each other, they find a most unexpected parcel - an abandoned baby girl which Hana wishes to keep and names Kiyoko. Gin and Miyuki insist that the better course of action is to find the baby's parents and so the threesome begin an amazing adventure as "Tokyo Godfathers." Cowriter (with Keiko Nobumotoo)/character designer/director Satoshi Kon, whose last animation, "Millennium Actress," tackled the history of Japan and Japanese cinema, progresses yet again with his delightful exploration of alternative family that is "Tokyo Godfathers." Using the same cyclical style of screenwriting as "Actress," where characters' stories continually reflect onto others like a rippling pool, Satoshi also tips his hat to the religious symbolism of John Ford's "Three Godfathers" while becoming the first animator to address the issue of homelessness. As we get each 'godfather's' backstory, it becomes clear that the squabbling threesome have found together what they've lost in life. Gin tells about losing a wife and daughter, also named Kiyoko. Hana lost her man and Miyuki has run from her guilt-ridden rift with her policeman father over her pet cat 'Angel.' In tracking Kiyoko's parents, not only do the trio cross paths with the mob, a kidnapper and multiple ambulances, they also each take a personal journey and find their own peace. The problems of the homeless, from economic considerations to hygiene to prejudice and sadistic bullying, are seamlessly incorporated into the story. And while Satoshi is packing his film with all kinds of deeper meaning, he also has time for car chases, offbeat laughs and a climatic rescue right out of a Jackie Chan movie. Technically, the animation is more vivid and fluid than Satoshi's previous film. City structures are almost photographically rendered, as are the snow-covered streets, providing a harsh reality for the anime-styled homeless - one can almost feel the cold out of doors and the warmth provided by shelter. There is beauty to be found in this world as well, from the magic of snowfall to the red glow of traffic cones set upon whiteness. The animators even place the film's opening credits inventively into the street and business signs passing in the background of the action. Keiichi Suzuki employs an unusual range of musical styles for an animation, adding another layer of richness to the film. Yoshiaki Umegaki is called upon to sing a few numbers, most amusingly "Climb Every Mountain" from "The Sound of Music," in addition to his delicious vocal work. Toru Emori gives Gin a gruff sentimentality and Aya Okamoto takes Miyuki seesawing between bratty churlishness and a hesitant softness. Do not discount "Tokyo Godfathers" as only an entry for the anime enthusiast. This beautifully realized film tells a universal story with visual flair.

Chilean writer-director Alejandro Fernandez Almendras tells a story about a man, Jorge, and his family, who believed, until now, that they live in a safe and secure neighborhood. That changes when the thug, Kakule (Daniel Antivilo), after mugging Jorge, shoots his son, Jorgito (Ariel Mateluna), who had just celebrated his 18th birthday. For his heinous deed, Kakule gets a mere two years in prison. When Jorge and his family begin getting threatening phone calls, obviously from Kakule, they once again go to the police and demand a restraining order. But, a loose cannon like Kakule will not be deterred by a mere piece of paper. He chooses Jorge’s daughter, Nicole (Jennifer Salas), as the next target in his terror plans. This proves a bridge too far for Jorge and he takes matters into his own hands to protect his family. The story of a father’s revenge in order to protect his family has been around for many years and in many guises so “To Kill a Man” covers familiar ground. You root for, and sympathize with, Jorge and his primal need for survival and protection against a more powerful, brutal enemy. You also loathe Kakule, who shoots himself after gunning down Jorgito to make the attack look like “self-defense. “Just desserts” is one phrase that comes to mind about Jorge’s motives in vengeance against the monster. Director Almendras does an economical job in telling his original story in under 90 minutes without making the film feel rushed. He takes a straightforward approach to his tale of a man pushed too far but, still, way over his head in his revenge. You should, and do, feel his anger and frustration in just wanting the constant terror to end. (“To Kill a Man” is Chile’s entry for Best Foreign Language film for the Oscars.) I give it a B-. The DVD release of “To Kill a Man” is sparse with its few extras. There is an interview with the director that goes on too long, if the increased fidgeting of the interviewer is any indication. There is also a trove of deleted scenes which consists, mostly, of long shots of Jorge waling through the forest or on the beach. I can understand why they were deleted. Also included are theatrical trailers of the film But, there is one unexpected oddball “treat” within the extras: a bonus short film called “Our Blood,” about a half brother and sister who meet each other on a remote Bison ranch. It may not seem like much but I could not stop watching this strange story of incest.