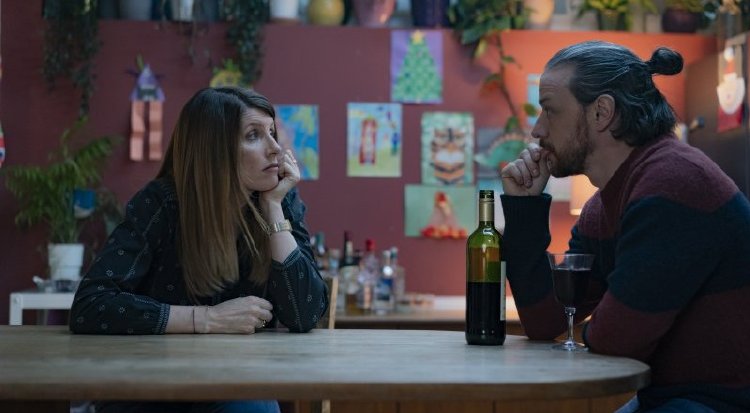 On March 24, 2020, England announced a national lockdown due to the COVID pandemic.  After watching a couple and their young son unload bag after bag of supplies from their car into their kitchen, She (Sharon Horgan, "How to Build a Girl") will address the camera to tell us she thinks of her partner ‘as a cancer’ while He (James McAvoy) tells her ‘I hate your face.’  She’s on the political left and he’s on the right and the only reason they tell us they remain a couple is because of their son, Artie (Samuel Logan).  But a year’s worth of experiences in close quarters will have some surprising effects and find them still “Together.”

Director Stephen Daldry ("The Hours") shot this dramedy in 10 days (using COVID safety protocols) with a script from Dennis Kelly (Horgan’s UK sitcom ‘Pulling,’ HBO's 'The Third Day') and it is a nimble display of choreography using unbroken shots (cinematography by Iain Struthers) as long as ten minutes in one location (Karen Wakefield's production design allows for movement and changing backdrops).  Barely one scene into the film and I was astonished by the dexterity of McAvoy and Horgan, performing long, dialogue heavy scenes with nary a break while conveying the full spectrum of human emotion.  This small cast and crew has accomplished a lot with a little.

While She is the daughter of a leftist activist, He calling his mother-in-law a ‘communist’ with real affection, He runs a boutique data analytics consultancy (shades of Cambridge Analytica?) She cannot make heads nor tails of and which has made him wealthy.  He’s a ‘pull yourself up by the bootstraps’ type unafraid of flashing his money around, something we will learn when he tells a tale of trying to buy some aubergines (eggplants in the American vernacular) at a Tesco’s claiming to be out of them because Artie will only eat certain things and right now it’s aubergines.  We’re with him as he tells of confronting a sales clerk about the crates of them he’s seen in the back room, but when he offers her 1K pounds for a few it is queasy making.  He then recounts his verbal assault when she refuses, basically telling her she’ll never get anywhere because she isn’t a greedy shark.  She and we are appalled.

The score is evened ever so slightly in a shared tale of a mushroom picking excursion, one in which both thought of poisoning the other with the fungi their guide points out as dangerous.  One of them, it turns out, did indeed get very ill, the other providing comfort.  There’s a bit more to this story, though, in how these two relate to each other.  He tells us to never make a life changing decision after a near death experience as this incident led to Artie’s conception.

As He tells us of growing veggies as the days and death counts mount, it is his unseen mother-in-law who brings out the couple’s most basic humanity.  Early on we listened as She professed her mother safe after her sister stepped up and got her into a care home.  A matter of months later and She is keeping track of her mother’s biological signs in a spreadsheet.  Then the dreaded call comes and She leaves, allowed a fifteen minute goodbye.  Upon her return, He listens as She, shattered, recounts what happened.  The love He feels for her is palpable – we can see it in McAvoy’s eyes - and if it isn’t quite reciprocated in full it is because his viewpoints and behavior toward others are more deplorable, over the course of time we’ve seen he is not only capable of deep feelings, but perhaps the more supportive of the two.

Both actors are outstanding, their sparring and sharing the basis of comedy, pain and yes, love.  If there is a fault here, it is with the treatment of Artie, who exists like a strange phantom on the sidelines, his behavior only explained by one of His comments about how odd the boy is (is he on the spectrum?).  The film’s final scenes are clearly a political statement on the failures of the British Government’s handling of the crisis, something both He and She finally agree on and something Daldry and Kelly almost succeed in making organic to the whole.  There have already been a number of pandemic films released and I’m sure there will be many more to come but “Together” is sure to be one of the very best of them.

England, in March of 2020, went into lockdown because of the COVID-19 pandemic. One couple (James McAvoy and Sharon Horgan) and their 10-year old son, Artie (Samuel Logan), like so many of us, face a very different life that no one expected to last, going on two years now, in “Together.”

As I watched “his” and “her” lives unfold over the many months of this terrible pandemic, I was struck by two things. He and she do not like each other and they take little care of their neglected (if not downright abused) son. We spend the year with them sniping at other, making judgments on everyone else and commenting all the way on how their poor lives have suffered.

I had the feeling that I was watching two entitled people who, BC (Before COVID), had it all, he with a thriving business and she a dedicated social worker. Then came the lockdown and neither show any sign that they actually like each other. This is a story about burning your bridges down in your closest relationship because of the external trauma of the pandemic.

As the year (plus) progresses, there seems to be a tempering of the angst between him and her, but it never dissipates. Most of all, I felt bad for poor Artie, stuck in a home where he is unwanted and hears it said, by his supposed protectors, out loud. Human services should step in and put the boy in protective custody away from his damaging parents.

Director Stephen Daldry and writer Dennis Kelly do give us insight in this character study of two people who do not belong together and how the confines inflicted by the virus bring that all to a head. Hopefully other families, like those actually ravaged by COVID, fared better emotionally than the three casualties depicted here. We have all been sorely tested since the beginning of 2020 and “Together” shows how some could not take it.

As always, James McAvoy is a pleasure to watch whatever the role and builds a believable (but often unlikable and selfish) character in “him.” I am not familiar with his co-star Sharon Horgan, but the actor also creates a real person. But, these two people are diametrically on different political fences (you figure out which is which early on) and their constant bickering makes the viewer take sides, Personally, I am with “her,” not “him,” most of the time.

Veteran helmer Stephen Daldry shares directing duty with newcomer Justin Martin in this constantly moving, non-stop dialog that is sharp, witty and unique look into a well-off family coping with COVID, It is sometimes not a pretty picture.