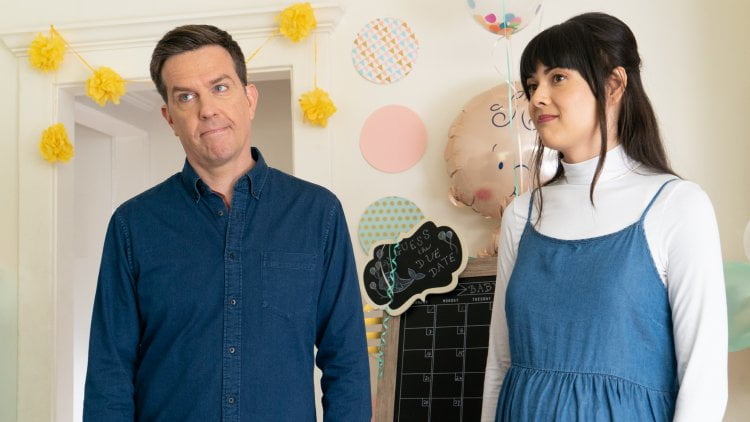 45 year-old app developer Matt (Ed Helms) is single, but seeing his brother Jacob (Timm Sharp) with his wife Liz (Bianca Lopez) and their two kids has made him decide the time to start a family is now.  26 year-old barista Anna (Patti Harrison) takes on the role of his surrogate with plans on using the fee to complete her college degree.  What she isn’t expecting is how Matt will push his way into her life but even after she sets boundaries, she is unprepared for the emotional toll the thought of ending the relationship takes in “Together Together.”

Writer/director Nikole Beckwith looks at the biological clock from a different gender perspective and throws the clichéd older man/younger woman dynamic into the platonic zone, yet her screenplay follows the basic romcom outline.  Thankfully she’s written some amusing dialogue and cast charismatic leads (along with one killer supporting performance from Sufe Bradshaw of HBO's 'Veep'), but once she introduces her plot obstacle, the film gets mired in formula.

We hear Matt before we see him, the camera focused on Anna as she answers questions during an interview, her irreverent, dry wit already evident as she turns the tables, directing Matt’s personal probing back at him.  While Anna doesn’t appreciate Matt popping in at her work with gifts of ‘pregnancy tea’ and arch-supporting clogs nor his tut-tutting over her choice of side dish, they begin to get to know each other during and after visits to their therapist (Tig Notaro in an under-developed role whose purpose goes unexplained) and medical checkups (where OB-GYN Tech Jean, played by Bradshaw, offers far more pointed and useful advice when Matt objects to Anna’s sex life).  Soon the two are choosing color swatches for the baby’s room and Anna is spending nights at Matt’s.  After she convinces him that it’s perfectly alright for him to have a baby shower and agrees to attend, though, it hits Anna like a ton of bricks that she has no place in this life going forward.  Anna tells Matt that for the surrogate pregnancy to be successful going forward, it would be better for them not to be friends.

This obstacle never really rings true as the two have gotten close enough to reveal their feelings by this point (the couples therapist and two separate group sessions have been conveniently dropped along the way).  Anna’s even talked her way out of the ‘Eeww’ she expressed when a family friend mistakes them for a couple.  Beckwith, who leans on tropes like the ‘killer app’ to explain Matt’s seeming financial independence, clearly has a better ear for dialogue and details than talent for plot mechanics

So cheers for the coaching Anna gives Matt on how to introduce a young girl to tampons, her changing view on the ‘Friends’ marathon he subjects her to and their decision to refer to the baby as ‘Lamp’ to avoid gender specifics, but boo to the manufactured quality that overtakes the film in its second half.  Helms has always had a likable Everyman quality and he deftly dances back from Matt’s intrusive overreaches but Beckwith has given the lesser known Harrison a real chance to shine here and the actress makes Anna a breakout role.  “Together Together” isn’t as ground-breaking as its central idea suggests, but Helms and Harrison keep it aloft.

Anna (Patti Harrison) sits nervously during an interview with Matt (Ed Helms). Is it a job interview? Well, sort of. She is answering his questions to see if she can be the surrogate mother for his baby. Matt, though, is not married and there are no plans for a Mrs. Matt in “Together Together.”

As I sat down to watch “Together Together,” I had the sense that I had seen this all before. And, I did, back in 2008 with “Baby Mama,” starring Tina Fey and Amy Poehler, about a successful business lady who decides to have a baby…and cannot have one of her own. That is about the only similarity that insipid, sophomoric “comedy” has with this Ed Helm/Patti Harrison charmer.

Of course, Anna is a hit with Matt and he “hires” her to have his baby. The story follows the usual rom-com formula with the clichés about getting along, conflicting personalities, difference of opinion and growing on each other. But, the chemistry between Helms and Harrison far outweighs the many clichés trotted out by sophomore director-writer Nikole Beckwith.

Ed Helms is a known comedic actor with a good track record – see “The Hangover” franchise films – but unknown-to-me Patti Harrison is the real find in “Together Together.” From her first nervous moments of the interview through the ordeal of the surrogacy responsibilities and the physical burdens of pregnancy, the actress makes you believe in Patti as a smart young woman, but also lonely and without an anchor, estranged from her family. Matt’s character, though, is less defined with only vague answers as to why he wants a baby – alone.

This is the kind of movie that, as I said, is full of clichés. But the presence of the two lead characters make you root for Anna and Matt to become a couple. The filmmakers, though, create a romantic comedy that is not ready-made for the Hallmark channel and that is a good thing. The ending is satisfyingly uncertain.

The tiny supporting cast is nicely fleshed out with solid, funny performances by Sufe Bradshaw as the cynical sonogram tech, Tig Notaro as the surrogacy therapist, Julio Torres as Anna’s sassy BFF and Nora Dunn and Fred Melamed as her amusing mom and dad. All in all, a nice package that some may call “cute.”