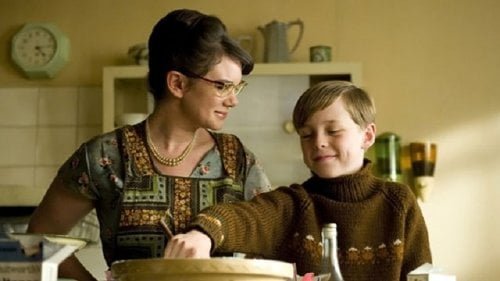 Nigel Slater (newcomer Oscar Kennedy, then "Finding Neverland's" Freddie Highmore for the last 30 minutes) was attracted to the culinary arts from a young age when he'd accompany his mother (Victoria Hamilton, "Persuasion," "Mansfield Park") to the market, but she never cooked anything that didn't come from a tin. There was an exception, one which young Nigel equated with love - when dinner was ruined, mom would make "Toast."

Television director S.J. Clarkson ('Eastenders') and Oscar nominated screenwriter Lee Hall ("Billy Elliot") have made a very odd little movie based on English food writer Nigel Slater's memoir 'Toast: The Story of A Boy's Hunger.' The aggressively nostalgic production design is like the world of 'Wallace & Gromit' come to life and the action is punctuated with the kind of goofy visual sexual metaphors the 'Austin Powers' movies were so fond of. The film's first half, which chronicles Nigel's love for his mother, is lovely but it's second half, dominated by Helena Bonham Carter's harpy of a housekeeper Mrs. Potter, is perversely sadistic. The whole movie celebrates food and charts Slater's homosexual awakening. Young Kennedy, who is much more expressive than his older, more famous counterpart, doesn't overplay his hand as the nine year-old boy shows an unusual interest in cooking. Gazing at pork pies in a case, he's told by his mother that they are 'too common' and she won't even think about his request for fresh cheese, but she does indulge his desire to make spaghetti bolognese when he shows her that the sauce comes in a can. His father (Ken Stott, "One Day"), whom Nigel describes as 'not sweet' (the man's always bellowing, but is not without feeling), will have none of it. Nigel's enamored of their gardener, Josh (Matthew McNulty, "Control," "The Arbor"), who tells him about growing things and lets him know it's alright to sit in the rain. There's a homoerotic but innocent undertone to the friendship, but when dad gets wind that his son saw the young man naked (when changing into work clothes), Josh is expelled. Then mom's asthma becomes increasingly worse. She rallies one day to keep a promise to teach her son how to make a mince pie, but dad had forgotten to buy the mince and she's gone the next day. Nigel thinks his worst fear has come true, being left alone with his dad. His school friend Warrel (Frasier Huckle) explains the old adage about a man's stomach and Nigel makes a touching attempt to cook his dad's favorite dinner on the one night he comes home late after it's ruined. But just when there appears to be a father-son connection, enter Mrs. Potter, a chain-smoking cleaner from the council estates who has a habit of exposing the tops of her stockings as she scrubs and whose cooking is everything Mrs. Slater's was not. Nigel's horrified when dad starts running around with the married woman and the two begin to wage war over him with competitive cooking. After the affecting portrayal of Nigel's mother by Hamilton, Bonham Carter's Potter comes across as monstrous, making it hard to buy into Mr. Slater's fascination. The film almost becomes cartoonish. There are still moments, such as Nigel's dance with his mother's dress and dad's reaction to finding him with it, but the film has turned to black comedy of the not often funny sort. Still, the filmmakers do succeed in cataloging how two very different women shaped a boy's career in very different ways. The film, which played on BBC1 in Britain, wouldn't be considered a TV movie in the states. There are subtleties like the school milk line which Nigel rejects, the two pupils who vy for his unwanted bottle (scene stealing Kia Pegg and Rielly Newbold) and the humorous underlying rationale to who gets it. Soundtrack selections are 60's gems. Production design and costume are eccentrically stylized. Nigel Slater himself appears as the head chef of London's Savoy Hotel in the film's last scene. But the two 'name' actors, Highmore and Bonham Carter, are the film's least appealing elements. Bonham Carter's Mrs. Potter may be predatory, but she gives the character an air of desperation which makes the film's protagonist seem cruel rather than triumphant at film's end.