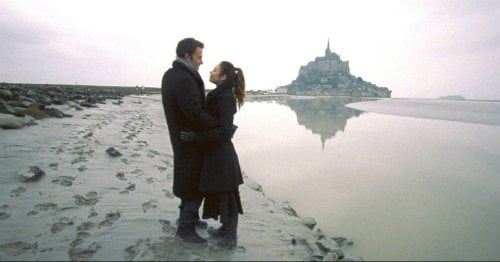 An American man, Neil (Ben Affleck), meets a young woman, Marina (Olga Kurylenko) in Paris. They fall in love, marry and he takes her and her daughter to his home ground digs in Oklahoma. Once there, though, their marriage begins to crumble, especially when he rekindles a relationship with a former beau, Jane (Rachel McAdams), in "To the Wonder."

Neil (Ben Affleck), an American, falls in blissful love with Marina (Olga Kurylenko, "Quantum of Solace," "Seven Psychopaths") on a visit to France. She vows to follow him wherever he goes and so he invites her to move into his Oklahoma home with her daughter Tatiana (Tatiana Chiline). But although she finds her new home 'a land so calm, honest and rich,' the romance cools in "To the Wonder." Writer/director Terrence Malick ("Days of Heaven," "The Tree of Life") leaves behind the universal meaning of life to focus on something a lot more personal in nature. It has been suggested that Ben Affleck's Neil is standing in for his private director and that Kurylenko and McAdams represent a past and present wife. But although Malick's signature filmmaking style is as lovely as ever, "To the Wonder" isn't very involving. Affleck's never looked more uncomfortable on screen and Kurylenko seems to spend half her screen time twirling about, her arms raised, like Jessica Chastain in "Tree of Life" ten times over. Malick depicts his lovers sight seeing in Paris and at Mont St. Michel to Kurylenko's narration ('You lifted me off the ground and brought me back to life.'). It is ten minutes before we hear Affleck speak, calling his lover's daughter. The gray beauty of French antiquities is replaced by flat, golden wheat fields (prime twirling land), power lines and a plain, boxy American ranch home. Neil goes to work as an environmental inspector, leaving Marina alone in a foreign land. They interact less and Marina seeks solace with a local priest. Father Quintana (Javier Bardem, "Skyfall") spends his days visiting the sick and the poor. His evenings are spent in his shadowy home. All these lonely people. When Marina's Visa expires, Neil doesn't ask her to stay, so she and Tatiana return to Paris. Neil runs into ex-flame Jane (Rachel McAdams, "The Notebook"), now married to a gambler who doesn't want kids, living in a run down ranch. They rekindle their relationship, but when Marina needs help, Neil goes back to France. Malick is gifted with an ability to tell a story almost silently, information coming in around the edges, in whispers. He uses his actors almost like models, to convey mood, and not all are suited to his technique. McAdams does well by her director, but his star does not. Bardem also creates a character, but the Catholic filmmaker never fully integrates his priest into his story. Quintana is another picture of sadness, alone amidst his flock. There are some really beautiful scenes, here, a small town building made glorious at magic hour, the camera peering right through its front and back windows, reflecting within and without. But Affleck even suffers as an object, Malick coming in so close, the actor's head is exaggerated into an Easter Island statue. "To the Wonder" is not the movie for a Malick novice to begin with. It's unmistakably his, but the usual rewards to be found are scant.

Some filmmakers make their films, one for me one for you. For every film they make for us, they make one for themselves. Not so with "To the Wonder," which, as with all Terrence Malick films, is definitely made for himself. This has to be the case because there is little that appeals to me as a film buff – except for the filmmaker's trademark camera composition. There may be little value to the film for me but I am still impressed by Malick's eye for beauty on film. The problem is on many levels. The story, by the director, lacks reason but it is the acting that fails completely. Ben Affleck looks like he wants to be anywhere but there, even if it involves sharks. He is wooden in movement, stilted in the sparse dialog and there is little commitment by the actor (is Ben becoming too much the director to be directed by another?). There is a story here. Neil and Marina are in Paris and in love. They spend their days walking around the city with her usually dancing around like a wood nymph on too much sugar and caffeine. This behavior continues through most of the film and gets real tedious. Rachel McAdams's Jane acts much like Marina but more subdued so you know why Neil would see Jane as more appealing. There is also a tacked on story thread involving Father Quintana (Javier Bardem), a troubled Catholic parish priest who Marina turns to for comfort. The priest is at a crossroads, questioning his faith to remain a soldier of God. The character only touches the main story very briefly and not to much affect. The gorgeous photography by Emmanuel Lubezki, alone, cannot save a film It amazes me that "To the Wonder" is by the same director who made "The Tree of Life." That film took us from the earth to the cosmos. This latest work by Malick takes us to Oklahoma.