To Rome, With Love 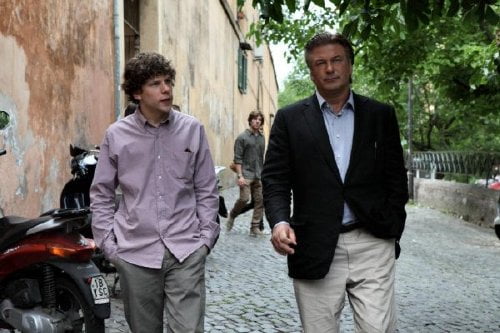 As 'Volare' swells on the soundtrack, a Roman policeman (Pierluigi Marchionne) atop the Piazza Venezia's famous traffic pedestal informs us that he can see everything before introducing the various couples - natives and foreigners, young and old - who have come "To Rome, With Love."

Just because writer/director Woody Allen may have enchanted you with Parisian midnights does not mean you'll necessarily fall in love with Rome. This homage to Italian cinema chops together (tellingly there is no editor attributed on IMDB, just an editorial department) multiple story strands which will be all too familiar to those who know the Allen canon. And although Woody appears in this one himself, his timing is so off he and Judy Davis ("Deconstructing Harry") appear to be acting in two different scenes as married couple Jerry and Phyllis. As an Allen fan, I've gone easy on many of his lesser efforts, but "To Rome With Love" must be his most disappointing film since 1998's "Celebrity." Hayley (Alison Pill, "Midnight in Paris," "Goon") is an American tourist in Rome for the summer who stops Michelangelo (Flavio Parenti, "I Am Love") for directions to the Trevi fountain. Romance blooms and their engagement calls retired music producer Jerry and Phyllis to Rome to meet his parents, Ellen (Lynn Swanson) and Giancarlo (opera tenor Fabio Armiliato). Jerry hears Giancarlo singing in the shower and becomes obsessed with staging Pagliacci with him in the lead. Jerry's discomfort shaking fresh-from-work mortician Giancarlo's hand is funnier than anything else in this story. Mispronunciation of Michaelangelo's name is mistaken for high hilarity and the character's hostility toward's Jerry's desire to set up an audition for his dad is inexplicable. Stepping out of Fellini's "I Vitelloni," milquetoast Antonio (Alessandro Tiberi) and his pretty school teacher wife Milly (Alessandra Mastronardi) come from the country to honeymoon in Rome. While there, Antonio's uncles are set to introduce him to some industry bigwigs to further his career, but Milly gets lost looking for a hair salon and a hooker, Anna (Penélope Cruz, "Vicky Cristina Barcelona"), who ends up in their room by mistake plays her part instead. Cruz impersonates Sophia Loren's "Yesterday, Today and Tomorrow" hooker while Mastronardi recognizes her favorite actress Pia Fusari (Ornella Muti, "Flash Gordon") and ends up lunching with Rome's sexiest star Luca Salta (Antonio Albanese, "Days and Clouds") - in the same restaurant as her husband. Leopoldo (Roberto Benigni, "Life Is Beautiful") is introduced as a typical middle class Roman. At the water cooler, he's full of opinions nobody is interested in. Then one day on the way to work he's mobbed by papparazzi, booked onto TV chat shows to discuss his morning breakfast and attending movie premieres with his wife Sofia (Monica Nappo), whose 'junky cotton print' and laddered stockings are cooed over as a new fashion trend. Then media focus shifts to the next guy. "La Dolce Vita" this isn't. John (Alec Baldwin, TV's '30 Rock') is introduced as a famous architect sitting at an outdoor cafe with his wife Carol (Carol Alt) and another couple. Just like Owen Wilson in "Midnight," he's not interested in their tourism plans, preferring to walk the streets. In Trastevere, where he lived as a young man, he's recognized by architecture student Jack (Jesse Eisenberg, "The Social Network") who takes him home for coffee with his girlfriend Sally (Greta Gerwig, "Damsels in Distress"). This segment is a pale rehash of "Barcelona" with Ellen Page's ("Inception") Monica proving the fiery temptress (except in this case, her talent is proved a sham). Baldwin morphs into an unseen advisor a la Humphrey Bogart in "Play It Again, Sam." Eisenberg would make a great Allen substitute in a better bit and Page, though miscast, is intriguing to watch. Allen's original title for this one, "Bop Decameron," is much more interesting than anything that made it to the screen. Allen's Rome is the one anyone would know from postcards. The film haphazardly jumps from one story to the next and back again with no attempt at finding a thematic segue or common cutaway. Allen does introduce the phrase 'Ozymandias melancholia' in that last segment - a depression that falls upon those looking for what has been lost and realizing it is gone forever - an apt allegory for a city where ancient ruins live alongside a modern landscape. Allen fans may just experience their own Ozymandias melancholia for the early, funny ones.

Couples converge on the Eternal City of Rome to meet parents, parents-to-be, in-laws and in-laws-to-be. Writer-director Woody Allen brings together a huge ensemble cast to fill the many characters’ shoes as he shows off that beautiful city in “To Rome with Love.” Woody won an Oscar this year for his original script for “Midnight in Paris.” That film was a lovely fantasy homage to Paris in the 1920s when the icons of art, literature and philosophy began their auspicious careers. His move to Rome does not have the fairy tale hook of “Midnight” and, with an enormous cast, too many stories to follow. Woody Allen, when not the star of his films, often times has a surrogate character take his place – John Cusack in “Shadow and Fog,” Kenneth Branagh in “Celebrity” and Owen Wilson in “Midnight in Paris.” In “To Rome with Love” the auteur has several alter egos from Aleck Baldwin, to Jesse Eisenberg and to Woody himself, making this one of his more self-indulgent films to date. And, none of these permutations, including his own, is endearing or dimensional. Most of the characters in “To Rome with Love” are only one- or two-dimensional, making this a lesser Woody Allen effort both as writer and director. The story, if you can call it that, is a series of unconnected vignettes that follow the characters through there trials of love and fame. Roberto Beignini, for instance, is an everyman kind of guy who wakes up one day to find himself famous – for no reason – and is told that he is famous for being famous. When he loses his fame it is to new nobody and Beignini’s character, Leopoldo, is deflated when nobody cares about him anymore. This is the problem with “To Rome with Love” - I simply do not care.