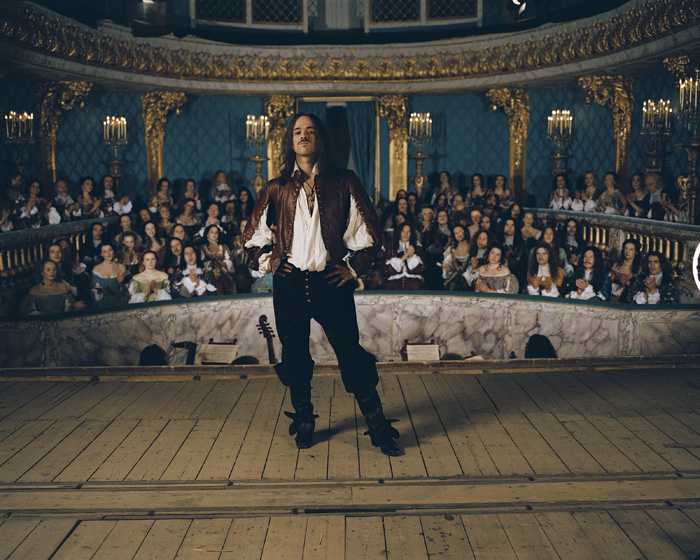 In seventeenth century France, a comedy troupe spent thirteen years in the provinces sharpening their skills before triumphing in Paris. Cowriter (with Grégoire Vigneron)/director Laurent Tirard imagines an interlude where his hero's most famous work is inspired by personal experience. After being thrown into debtor's prison, the actor must act the part of a priest and conceal his true identity as "Molière."

The "Shakespeare in Love" device of having an author in search of his muse while gaining the life experiences that will inform future works is an inspired device to illustrate the life of a writer. Tirard presents Molière like a 17th century Woody Allen - a playwright who yearns to write drama when his forte is farce. It is his muse and future character, Elmire (Laura Morante, "The Son's Room") Jourdain, that if the laugh fits, he should wear it. Romain Duris ("L'Auberge Espanol," "The Beat That My Heart Skipped") works his prominent chin to evoke both petulance and pride and is a delight as the conflicted lover who accomplishes much good under hire of a rich man to pull the wool over the eyes of his wife, the older woman the playwright he falls for. The name he gives himself? Tartuffe. Monsieur Bonnefoy (Philippe Du Janerand, "My Best Friend") presents the deal which Molière initially rejects - teach Monsieur Jourdain (Fabrice Luchini, "Intimate Strangers") how to act so that he may woo a younger, very popular lover - and his debt will be paid. En route to Jourdain's manse, the young man is made to sign an agreement to keep his identity secret and learns there is a Madame Jourdain being duped as well. But as the husband is a fool and the wife shrewd, Madame Jourdain is not fooled and secretly turns her husband's plot on its head by bedding his teacher while his gambit fails. Duris and Morante are marvelous together orchestrating their desired ends and the actors show real spark - it is the kind of pairing one wishes could have worked, but the filmmakers and Luchini provide sympathy for the cuckolded husband and a flash forward framing device that takes the sting off. And the farce isn't limited to these three, but far more complex. There is the Jourdain daughter who wishes to wed her lover while dad would use her as a pawn to curry the favor of Dorante (Edouard Baer, "How Much Do You Love Me?"), a penniless 'friend of the king' Jourdain is always trying to impress. Dorante casts Jourdain a would be Cyrano while making himself the message bearer. The object of their affection, Célimène (Ludivine Sagnier, "Swimming Pool"), is uncovered as being kind to be cruel. "Molière" is the type of film Miramax used to distribute back in the day - smart but entertaining - and a rousing romp.