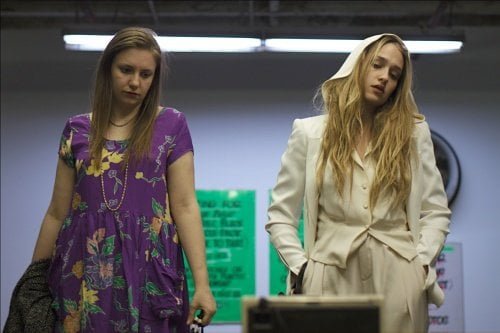 Writer/director/star Lena Dunham ("Creative Nonfiction") has made her second autobiographical film and her sophomore effort has taken off, garnering film festival awards and theatrical distribution from IFC Films. The twenty-two year old has done a lot with a little, considering that the leads in her film are friends and family and that cinematographer Jody Lee Lipes ("Wild Combination: A Portrait of Arthur Russell") has achieved crisply composed images using an HD SLR still/video camera (the Canon 7D). While Dunham's writing is often overly clever for natural dialogue, it's also often laugh out loud funny. "Tiny Furniture" is like a female collegiate response to Azazel Jacobs's "Momma's Man." Aura's depressed over her college boyfriend breakup and hangs onto her past with phone calls to Frankie ('Nurse Jackie's' Merritt Wever), who is planning on moving to the city as Aura's roommate. New and old doors are opened when she attends a party and is introduced to Jed (Alex Karpovsky, "Beeswax"), a Youtube star for his Nietzschean Cowboy videos, and is found by childhood friend Charlotte (Jemima Kirke, the film's breakout star), a needy, entitled Boho sponging off dad. Charlotte puts Aura on the job track - as a 'day hostess' at a neighborhood restaurant earning $11/hr - and promises to get Aura's video - of her cavorting in a college fountain in her underwear - in a gallery show. Her 'date' with Jed, who has no money, turns out to be an introduction to her mother's loft and her dead hamster. While mom and sis are away for a week on a college tour, Jed moves in but keeps his distance while Aura keeps sidling up to Keith (David Call, TV's 'Gossip Girl,' 'Rescue Me'), the hip, seductive restaurant chef who sends mixed signals. By the time mom gets home, Aura's burned bridges all across town. Dunham's not afraid to put herself on the line, parading her pudgy figure around without pants and in public gallery space (her sexual misadventures even result in a moment of creepy self reflection. I'm sure there are plenty out there who will empathize with her plight in today's economy (if it can be called a plight to attend Oberlin and crash at mom's fabulous NYC pad). Her writing is frequently hilarious ('Why don't we take an Ambien and watch "Picnic at Hanging Rock" or "Christiane F." or something?' asks Charlotte or her sister's observation that poetry is the failure of the intellectual community because 'it's like dreams - everyone likes to tell them but no one cares except for their own.') The acting talent is uneven, but gets Aura's story across. Dunham herself uses too many hand gestures, particularly in a one on one showdown with mom, as if she doesn't know what to do with them. Simmons is a bit remote, her readings a little flat. That precocious sister, who not only really did win a prestigious poetry award but has modeled for Teen Vogue, is the most natural actress in the immediate family. The two romantic potentials are both pros, but it is childhood friend, Jemima Kirke, who breaks out as a gifted comedienne, the film's most sparkling presence. Dunham employs a geometric visual and costume design throughout, framing herself within boxes and lines, splitting herself off with divided rooms or contrasting her sexual desirability against Charlotte's via her drooping Peter Pan collar competing with her friend's pert curlicued blouse. Like her dialogue, it is borderline self-consciously obvious sometimes, but also exhibits real filmmaking talent. Dunham's using her own life for comedic commentary and "Tiny Furniture" is an impressive calling card. Some added maturity may bring great things.