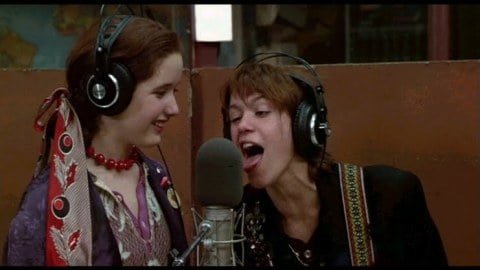 When city commissioner David Pearl (Peter Coffield, who died three years later at the age of 38) uses his squeaky clean daughter Pamela (Trini Alvarado, "Little Women," "All Good Things") in an anecdotal story about why he had to forbid her from seeing "One Flew Over the Cuckoo's Nest" because of where the theater was located, she's had enough, but her rebellion lands her in the hospital. There the innocent school girl is paired with roommate Nicky Marotta (Robin Johnson, TV's 'Guiding Light'), a homeless street punk, who inspires her. The two escape together and become famous as the 'Sleez Sisters' with the help of WJAD DJ Johnny LaGuardia (Tim Curry, "The Rocky Horror Picture Show") in "Times Square."

Cowriter (with Jacob Brackman)/director Allan Moyle ("Pump Up the Volume," TV's 'The Man in the Mirror') had something a little grittier in mind when he made this early film, which ending up playing a bit like "The Warriors" crossed with "Hardcore" in a toothless kind of way. But still, the film not only features a killer '80's soundtrack but it celebrates the pre-Disneyfied version of New York City, and Times Square in particular, just as forces like the fictional David Pearl were campaigning to change it. Star Robin Johnson is so strikingly right in the role of Nicky, one wonders why her career never went anywhere. The film celebrates punk with its free spirit sisterhood (the film practically demands a sexual relationship, which Moyle reportedly shot only to be censored by producer Robert Stigwood) and artistic expression. The girls squat in a waterfront warehouse, steal food, perform in the notorious Cleo Club (where Pammy refuses to dance topless yet becomes a sensation!) and develop a 'trademark' of tossing televisions from high places. The girls don't appear to drink or do drugs, although they are gifted in late goings with a gratefully accepted bottle of vodka (maybe more producer tampering), and yet the film has that anarchic spirit nonetheless. Costume admirably looks concocted from the streets. If it doesn't wash when Pammy's daddy, who has practically leveled LaGuardia, sees her multiple times only to let her slip from his grasp and the film's Times Square concert climax goes all hokey on us, the pluses still outweigh the minuses. Johnson's a cocky phenomenon with the raspy voice of bona fide punk singer and Alvarado, one of the oddest careers in the biz, is believable as the good little girl who dares to be bad - to a point. Borrowing "The Warriors'" DJ device provides a good hook, but unlike the disembodied lips of the earlier film (which, ironically, famously opened Curry's magnum opus, "The Rocky Horror Picture Show"), "Times Square's" DJ is a fully fleshed character. Curry plays LaGuardia as the seeming champion of the disenfranchised, at least until he's challenged. The real champion would be Nicky's social worker, Rosie Washington (Anna Maria Horsford, TV's 'Guiding Light,' "Minority Report"), a nice, liberal supporting player. As Pamela and Nicky's doctors, Dr. Zymansky (David Margulies, "All Good Things") plays politics while the older, silent Dr. Huber (Herbert Berghof, "5 Fingers") smirks in a way that lets us know he's rooting for the girls. Watch also for the legendary Miguel Pinero as Roberto, the Cleo Club's owner. And there's the music, jump started with Roxy Music's "Same Old Scene." The Ramones' "I Wanna Be Sedated" is used a little too literally in a mental hospital, especially where the girls are trying to avoid anesthetization, but the music gets realistically darker with Gary Numan's "Down in the Park" and the Patti Smith Group's "Pissing in the River." XTC, Talking Heads, The Pretenders, The Cure, David Johansen and Joe Jackson are also featured, as well as two original songs, the first of which - "Damn Dog" sung by Johnson - isn't half bad if an obvious rip-off of The Stooges. "Times Square" doesn't have a great critical reputation and when I saw it a second time, years after its original release, I found it cheesy. But all these years later, while compromised, it stands a a solid piece of nostalgia for New York's punk rock era.