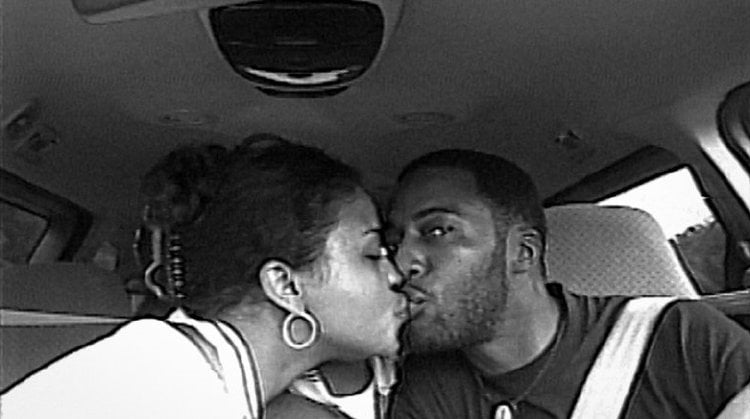 A woman, pregnant with twins, tells us that it is July 23rd and that her husband has been locked up since May 24th.  This is a video diary she is making for him and we will see those twins, Justice and Freedom, become men as their mother, struggling to raise six boys, somehow manages to become a successful businesswoman all while trying to get her husband Robert’s 60 year prison sentence reduced in “Time.”

Winner of the 2020 Sundance documentary best director award Garrett Bradley had originally planned on making a short after interviewing Fox Rich along with another woman in similar circumstances.  Then Fox showed her her trove of mini-DV tapes and a new idea was born, one which is conveyed in the dual meanings of the documentary’s title even though we never once view the incarcerated Rob.  Choosing to use a black and white version of the footage places it outside of time and yet we are startled when Bradley juxtaposes footage of the pregnant Fox with the current one, gray beginning to frame her face.

We learn the story of Fox and Rob in fits and starts as we watch the mother shepherd her kids to school, make endless calls to lawyers and prepare to shoot a commercial for (her?) New Orleans car dealership.  In 1997, the newlywed high school sweethearts were determined to open Shreveport’s first hip hop clothing store when, desperate for funds, Rob and his nephew attempted to rob a bank.  Fox’s mother Ms. Peggy notes ‘Right don’t come to you doin’ wrong,’  While this may be true, 60 years without possibility of parole, probation or suspense of sentence is an incredibly harsh sentence, one which both Bradley and her subject illustrate in terms of human lives affected.  As time passes, Fox becomes more and more of an activist, equating the current criminal justice system with slavery, the case made by Ava Duvernay’s “13th.”

But Bradley and her editor Gabriel Rhodes’ impressionistic look at the Richardson family raises one too many question it fails to answer.  We hear about Fox’s six boys, but only three are named and the timeline of their birth is mysterious.  It is not until well past the film’s halfway mark that we learn Fox also spent time in prison for that robbery.  We never learn any details of the crime itself, other than at some point Fox felt the need to apologize to the women who worked at that bank.  Were they terrorized?  Was someone hurt?  At one point she seems angry with Rob’s ‘everything will be OK, God takes care of the sparrows’ attitude, enough so that we wonder if this long suspended relationship, presented by the filmmaker as true love, will actually endure.  Then Ms. Peggy adds that ‘even though he did it,’ Rob had turned down a 12 year plea bargain deal.

Even though we are sometimes left wondering (the POV briefly turns to Justice, but when Bradley cuts to a younger boy is it him in the past or a younger brother?), “Time” does convey an entire generation lived with an absent father in a compact running time.  And that heavy sentence is made human, contrasted with the constant brush offs of judicial secretaries and Securus, the dehumanizing prison phone system that is a necessary evil for Fox to speak with Rob.  But despite the admiration that grows observing Fox navigate tremendous obstacles (‘Success is the best revenge!’) while raising well educated, thoughtful young men, one cannot help but feel that “Time” may be manipulating our emotions through lies of omission, an unfortunate lapse which so easily could have been addressed.