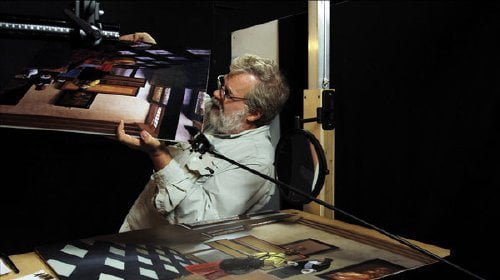 Tim Jenison is the entrepreneur and inventor who founded NewTek, developing video digitizers and the Video Toaster. Fascinated by theories (put forth by Professor Philip Steadman and championed by British artist David Hockney) that 17th century artist Johannes Vermeer used optics, most likely a camera obscura, to create his magically lit, incredibly detailed paintings, Tim, who had never painted, set out to test them by attempting to recreate The Music Lesson. Over the course of eight years, his friend, producer/narrator Penn Jillette (with silent partner Teller directing), followed the progress of "Tim's Vermeer."

The stunningly realistic paintings of Vermeer have captivated art lovers, always inspiring wonder at the singular genius that created them. X-rays have shown no underlying drawings to guide the artist, and yet every detail, down to the weave in a carpet, is accurate. But when Steadman published his book, 'Vermeer's Camera,' despite his convincing arguments the art world erupted, many believing that if it were true, Vermeer's reputation would be tarnished, his gift downgraded to trickery. What Jenison accomplishes, however, is so painstaking, so ingenious in its execution, it makes the dissenters look like nit pickers. Jenison cuts no corners. He travels to Delft to observe the light and architecture, visits Hockney and procures a special invitation to view a Vermeer at Buckingham Palace He grinds his own lens for his camera obscura, using materials and techniques from the artist's time. He recreates Vermeer's room and all the props from The Music Lesson and we get instruction in how the painting's perspectives are 'seen' as if through a camera rather than the human eye. Jenison's experiment uncovers new revelations about just how Vermeer did it and even finds a heretofore undiscovered flaw in the exactitude of the work caused by the method. His journey is fascinating and Jenison's sense of humor keeps it light and lively even when things go wrong. Eight years from when he began, the man who never painted before shows us what he has accomplished. The conclusion is jaw dropping, the feat remarkable.

Tim Jenison is a prolific inventor and consummate tinkerer who, through his art school-attending daughter, was introduced to the photo-realistic works of Dutch master Johannes Vermeer. There has been controversy for decades on how the artist went about creating his amazing canvases and Tim took the task of answering the question to heart. Through painstaking study and education, the engineer set himself the mission to paint a work by reinventing the artist’s camera obscura to make “Tim’s Vermeer.” Penn Jillette and his partner Teller became intrigued by Tim’s ambitious effort early on in the process and they, with producer Farley Ziegler, approached Jenison to make a film about his creating a Vermeer. The result is a fascinating look into the invention and genius of Johannes Vermeer in a way that only an engineer of Tim’s caliber could pull off. The whole process of creating Tim’s Vermeer took eight years to get it right and put to rest whether or not the artist did, in fact, use a camera obscura (look it up, it is fascinating) to create his real-looking paintings. Through his dedication, energy and brains, Jenison learned Dutch, became familiar with 17th Century mirror and lens making technology and learned how to make the paints and pigments of the day. Then, he took all of his knowledge and his skills (and they are many) to make an exact duplicate of Vermeer’s studio. Teller took the job of capturing the long, detail-oriented project on film and followed the inventor/engineer to Delft, Holland to examine Vermeer’s paintings and to Buckingham Palace to view and examine the painting he is to recreate – The Music Lesson. One of the remarkable things about Tim Jenison and his mission is that the man never took up a paint brush, as an artist, in his life. When you see how meticulously Tim duplicated the artist’s painting – compare his with the original – you realize that this is an incredible adventure.