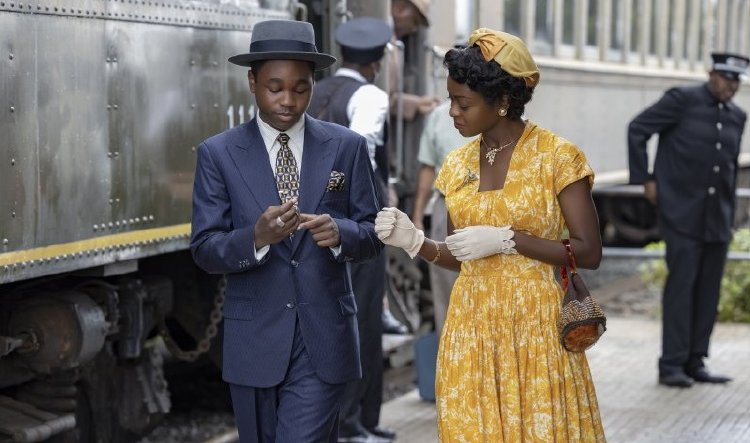 Mamie Till (Danielle Deadwyler, "The Harder They Fall") was the widow of a WWII veteran who held a good job with the U.S. Air Force and lived with her fourteen year-old son Emmett (Jalyn Hall, "John Henry"), known affectionately as Beau, in a nice apartment in 1955 Chicago.  Beau was excited about a train trip to spend some summer time with cousins in Money, Mississippi, but his mother worried about the southern state’s more overt and extreme racism, grilling her naïve son on how to change his behavior around white people there.  One week later, Mamie received the news she had been dreading – her son was missing.  After four long days, the horrifically mutilated body pulled out of the Tallahatchie River was identified as Emmett “Till.”

Rather than recreating one of the most horrific crimes of the Jim Crow south, cowriter (with Keith Beauchamp and Michael Reilly)/director Chinonye Chukwu ("Clemency") illustrates the transformation of a grief stricken mother who had been content with her life into one of the civil rights’ most committed activists.  The crime, of course, still horrifies (and thankfully occurs off screen), but it was its aftermath that changed history because Mamie Till made the brave decision to exhibit her son in an open casket, his face so badly beaten he was almost unrecognizable as a human being.  His killers may have gone free, found not guilty by an all white, male Mississippi jury (they actually earned $4K from a Look Magazine interview in which they admitted committing the murder), but the American public was shocked out of the moral stupor earlier lynchings had failed to break through.

Beau Till is obviously the apple of his family’s eye as he sings along with a Bosco commercial to the delight of his mother, mother’s boyfriend (and future husband) Gene Mobley (Sean Patrick Thomas, "Save the Last Dance") and grandmother Alma (Whoopi Goldberg).  The natty dresser is wholesome and naïve yet has the cocky assurance of a born entertainer and it is this that has his mother advising that ‘You can’t risk looking at them the wrong way’ about southern whites, a lesson perhaps difficult to teach when she herself has just faced down a white security guard in a Chicago department store.

There are varying accounts of exactly what happened in Bryant’s General Store, but the film presents an acceptable generalization, Carolyn Bryant (Haley Bennett, "Swallow") stone-faced behind the counter as Beau tells her she ‘looks like a movie star,’ then dares a wolf whistle on his way out.  Three days later, in the middle of the night, Bryant’s husband and his brother are banging on Preacher Moses Wright’s (John Douglas Thompson, "The 355") door, barging their way in and pointing shotguns until the boy is turned over.

Cinematographer Bobby Bukowski (“Arlington Road,” “Land”) continually features Deadwyler in extreme close-up and considering how the actress powers the film, this proves a wise choice.  We are right with Mamie in her indignation when her cousin, union labor leader Rayfield Mooty (Kevin Carroll, "Blindspotting"), tells her ‘We have an opportunity to help pass legislation to make lynching a federal crime’ (something which just happened in 2022 by the way), but after having to fight to have her son’s body returned to her in Chicago, then insisting on seeing him in the funeral parlor, Mamie’s grief evolves into resolve.  ‘No one is going to believe what I just saw’ Mamie tells reporters outside, inviting a Jet photographer in to take a photo of her son’s corpse (the photos were published in the 9/15/55 issue, but were not on the cover as suggested by the film).

She takes another brave stance when word gets back that the Bryants’ defense may suggest the corpse couldn’t be positively identified, deciding to make the trip to Money to testify.  She is accompanied by her father (Frankie Faison, "The Killing of Kenneth Chamberlain") and picked up by Medgar Evans (Tosin Cole), but treated horrifically by court security guards and the town sheriff and ignored entirely by Caroline Bryant, ironically tending to her child in court.

Deadwyler’s ‘a mother knows’ court testimony is the stuff Oscar clips derive from, a powerfully moving, emotional speech.   Her march out of the courtroom before the verdict is also a strong moment, dignity in the face of bigotry.  But the film itself is too pristine, Mamie’s hair, makeup and costume so perfect she could just as easily appear in a fashion spread.  Production design recalls the period but doesn’t feel lived in, Mamie’s home and Bryant’s store spotless, every thing in its place.  Too many scenes end with long fades to black or blinding white light.

“Till” is an important film which resonates today not only in the Black Lives Matter movement, but in the epidemic of school shootings, Mamie’s decision to display her child’s corpse something talked about today as a possible wake up call to enable gun reform.