Tigers Are Not Afraid 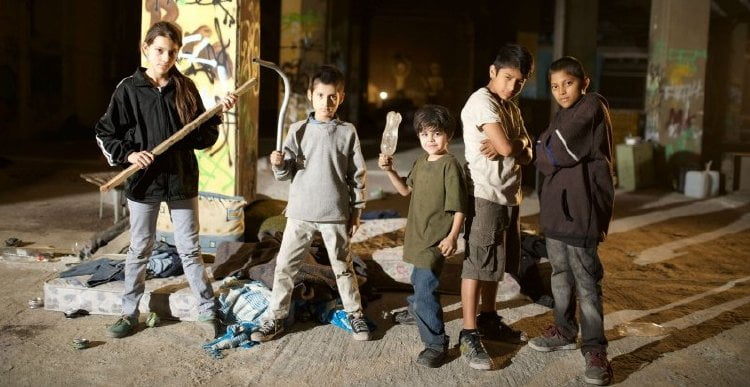 The drug cartels in Mexico, since 2006, have “disappeared” over 100000 men, women and children. When the mothers are murdered, the children remaining have only themselves to care for each other. These valiant little warriors face great danger because “Tigers Are Not Afraid.”

In a northern Mexican town where people routinely are murdered or go missing because of the Huasca cartel gang, 10 year-old Estrella's (Paola Lara) day at school includes lying on the floor in terror as bullets fly. Her teacher presses three pieces of chalk into her hand, declaring them 'wishes,' one of which Estrella needs to use when she returns home to find her mother is not there. But the mother who returns is not what the child expected and the orphaned child seeks shelter with the gang of young homeless boys led by El Shine (Juan Ramón López) in "Tigers Are Not Afraid."

This horrific and heartbreaking tale is given a Guillermo del Toro-like touch of magical realism and supernatural fantasy by writer/director Issa López, who, after this, should break into the boys club of great Mexican filmmakers. She's coaxed affecting performances from her mostly juvenile cast, most notably from first timer Ramón López, whose Shine has been forced into adulthood before his emotions can catch up. The tender romance that springs up between him and Lara and the restraint with which these young actors convey it is one of this film's many treasures.

Scared from her home by a literal trail of blood and voices of the dead, Estrella is initially rebuffed by Shine, who tells her girls are bad luck. That appears to be true when they're raided by Caco (Ianis Guerrero), who snatches their youngest, Morra. But Shine had stolen the drunken man's revolver and iPhone the night before and he offers Estrella harbor if she uses the gun to kill him. She enters his house on tiptoe brandishing the weapon, but uses her second wish. Lo and behold, the man is already dead and she finds mute little Morra still alive as she escapes from the house. But the kids' troubles are far from over as El Chino (Tenoch Huerta, "Sin Nombre") will stop at nothing to retrieve Caco's phone. The reason Shine keeps it is devastating enough, but the reason El Chino wants it should never be known by these children. Unfortunately, Shine finds its damning evidence and deduces what it means.

López injects her titular theme into her film from the very beginning. Tasked with writing a story, Estrella imagines a prince who wants to be a tiger. Shine draws graffiti tigers which spring into life. In the film's third act, Morra's stuffed tiger takes on a life of its own, leading Estrella to safety through a horrible reality. Similarly, Caco's phone is embellished with a dragon which springs to life, flapping about on tiny black wings until it's called back by Estrella. Inanimate birds will take magical wing in the film's final, saddest moments.

But although her film is permeated with supernatural fantasy and horror, it is López's depiction of the current reality for so many in the crosshairs of Mexico's drug wars which pains the most. We hear the blare of a political sound truck passing Estrella's school touting Servanda Esparzo. Shine's Tucsi (Hanssel Casillas) and Pop (Rodrigo Cortes) try to show two squad car policemen Caco's phone video, only to be left in their dust. Esparzo is revealed to be in cahoots with the Huascas. These kids have nowhere to turn except to their own inner tigers. "Tigers Are Not Afraid" is a powerful and imaginative work by a filmmaker I'm keeping my eye on.

Part fairytale, part ghost story and, in whole, a story of survival, writer-director Issa Lopez creates a world grounded in brutality but where there is always a glimmer of hope for the tiny tribe of orphaned kids.

11-year old Estrella (Paola Lara) has just lost her mother to the Huascas killers of the cartel. She wishes for her mom’s return, only to be haunted by her spirit. The frightened girl flees and seeks refuge with four orphan boys eking out an existence - Shine (Juan Ramon Lopez), Pop (Rodrigo Cortes), Tucsi (Hanssel Casillas) and little, mute Morro.

Shine steals the cell phone and fancy pistol from drug henchman Caco (Ianis Guerrero), only to find video proof of torture and murder. The killer wants his phone back and it is up to the diminutive gang of five to bring justice for all the mothers and fathers that have been lost to violence.

This could have been done as a straightforward, dramatic look into the plight of the abandoned children amidst corruption and cartel violence that devastates even entire cities in Mexico. Instead, Issa Lopez blends the above-mentioned fairytale with the real drama in a kids-versus-killers tale that brings both magic and mysticism – and hope – to the mix.

This all too brief (82 minutes) but wonderfully told and acted tale, with remarkably realistic performances from the youngsters, will not get anywhere near the audience it deserves. After watching “Tigers Are Not Afraid,” I realized that I saw something special and magical. I give it an A-.