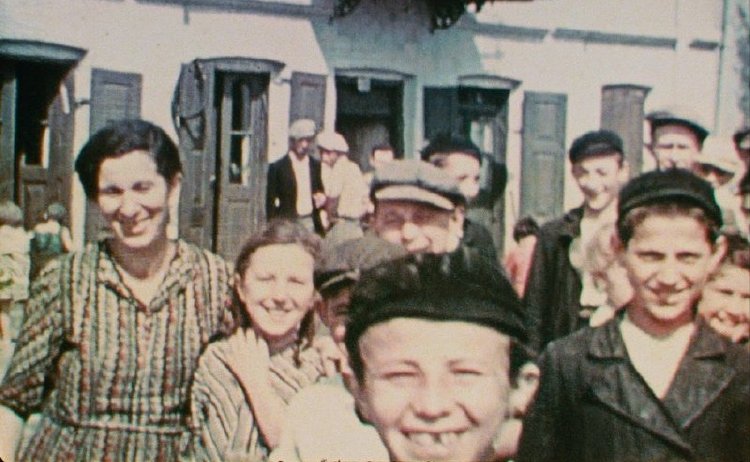 An old film unspools, the only sound that of the projector it is being run through.  We see the storefronts, the synagogue and square of an old European village where people crowd around trying to get into the frame, the camera clearly an object of some novelty.  Glenn Kurtz found this footage in his grandfather’s closet in Florida and after determining it was shot in Nasielsk, Poland, in 1938 before its population of 3,000 Jews was reduced to less than 100, donated it to the United States Holocaust Memorial Museum.  Two years later he was contacted by Maurice Chandler, a survivor pictured in the film at the age of 13.  This began the recreation of the history of a community lost to genocide in “Three Minutes: A Lengthening.”

Writer/director Bianca Stigter, a producer on “12 Years a Slave,” makes her feature directorial debut with a reverential and moving forensic study of three minutes of film which spirals off into individual stories and Holocaust history.  That the film was within a month of being beyond restoration makes the relived experiences in Stigter’s film all the more remarkable.

Glenn Kurtz began his research by trying to establish place, first trying the home town of one ancestor, dismissed by a former resident as ‘not my town,’ before positively identifying Nasielsk by the lion carved into its synagogue’s door.  Seeing one woman emerge from the doorway of a business, he focused on the sign, but while he could read that it was a supermarket, the lower lettering naming its proprietor was illegible even by the film processing lab (later she will be identified using letter shapes and the process of elimination).  Then, out of the blue, Chandler’s face is recognized by one of his granddaughters after viewing the film on the Holocaust museum’s website.  The man is still alive and begins to fill in more blanks, such as what the hats people are wearing signify (his designates his cheder school) and a possible explanation as to why so many were streaming out of the synagogue that day (a popular cantor’s visit).

Helena Bonham Carter’s narration can make the simple profound, such as her noting the precise moment two birds, which given the context of the film we are painfully aware have long passed from this earth, fly by in the background.  One small segment of the film is shot in a darkened interior, people peering into its windows from outside and it is recalled as a restaurant where people danced to BBC radio broadcasts.  Stigter identifies a big band recording which would have played back then and animates the scene to music.  The town’s major industry, a button factory, is showcased with its products seen on quality clothing (and a German account refers to the Jewish business they took over as a ‘Polish pig sty’).  A shot of the town square leads to the recollection of how all Jews were ordered to assemble there on December 3, 1939 and were whipped as they were marched 4 kilometers out of town to a train.  Many residents of the town laughed.  Others slipped bread to their friends.  Astoundingly, the fate of the entire community is tied to Treblinka, aided by journals hidden in ghetto milk crates.

Stigter and her editor (Katharina Wartena) separate and highlight each of the 150 residents of Nasielsk depicted in Kuntz’s home movie, then assemble them into a collage.  They create a panorama shot by joining pieces of film.  She ends as she began, but those three minutes are viewed quite differently.  The power of the media to record history, preserve memory and move emotionally is evident throughout her film.  You may believe you’ve seen one Holocaust documentary too many, but despite its awkward title, “Three Minutes: A Lengthening’ is unlike any of its predecessors, a marvel of film analysis.

In 1938, the David Kurtz family of Brooklyn NY went on a European tour that included a trip to Poland and the small town of Nasielsk where he filmed a scant three minutes of film on his brand new 16mm camera. By 1941, the town as once known and its Jewish citizens ceased to exist in “Three Minutes: A Lengthening.”

Bianca Stigter directs and adapts David Kurtz grandson Glenn’s book, Three Minutes in Poland: Discovering a Lost World in a 1938 Family Film and it is a pure and unique pleasure to watch.

We see the original three minutes of film and it harkens back, to me, of when video cameras entered our world. I remember trying to take video of a street scene in Glasgow and one teen girl kept trying to get into the shot. Now, go back to 1938 and David Kurtz’s movie camera – the first ever seen Nasielsk – and we see the rubberneckers trying to get into the shot. Some things in human nature just do not change.

After we see the three minutes of home movie, the filmmaker, with Glenn Kurtz’s thoughtful narration, begins to deconstruct and reconstruct those scant minutes of film. The restructuring fills the documentary’s 69 minute runtime and there is not a dull moment in that entire time. These the three minutes are analyzed in a way that brings you intimately into the daily life of the town.

Glenn Kurtz’s investigations into the town and its people reveals a place of dynamic life and, from the happy faces we see, a pleasant one. Just one year later, we learn, and the Nazis invaded Poland and we know how that turned out. We see people, and not just numbers that would be tallied at death camps, and learn of their lives.

The haunting statistics of what happened in that small Polish town after the invasion is sickening: Before the war, the town population of 7000 included 3000 Jews. After the war, only 100 of Jews remained alive. Now, multiply that by a million and we get the Holocaust. If that does not haunt you, nothing will.

Neon releases "Three Minutes: A Lengthening" via their Super Ltd. label in select theaters on 8/19/22.  Click here for play dates.