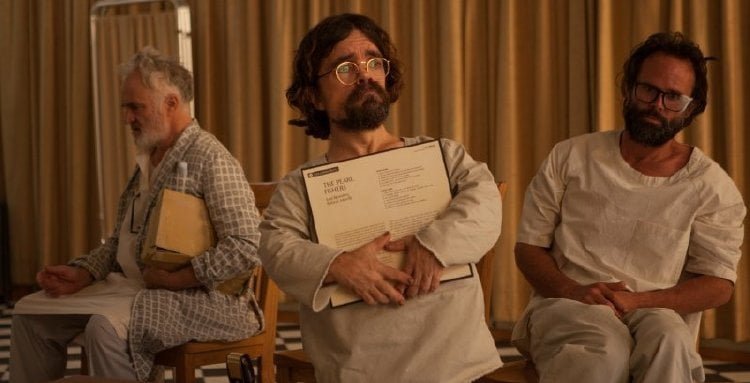 Dr. Alan Stone (Richard Geer) is a clinical psychiatrist who, in 1959, eschewed the “normal” tools of his trade like electroshock, lobotomy and the use of mind-numbing drugs. He faces his greatest career challenge when he takes on the treatment of “Three Christs.”

In the 1950’s, psychiatric treatment was pretty barbaric with shock treatment and lobotomies par for the course. Dr. Stone (Richard Gere), who’s already embraced LSD therapy for himself, wants to try a new, potentially risky approach at Ypsilanti State Hospital by bringing together three schizophrenic patients who believe themselves “Three Christs.”

Cowriter/director Jon Avnet has largely veered away from the big screen after such 90’s works as "Fried Green Tomatoes" and "The War,” instead working on television shows like ‘Justified’ and ‘Sneaky Pete.’ His latest film, adapted from psychologist Milton Rokeach's book 'The Three Christs of Ypsilanti,' has been sitting on the shelf since its premiere at the 2017 Toronto International Film Festival. Despite a strong cast, the film is narratively disheveled, introducing subplots only to drop them and coming to no strong conclusions about the success of Stone’s experiment.

After Stone presents his project to mentor Dr. Rogers (Stephen Root), he must keep chief of staff Dr. Orbus (Kevin Pollack) informed but at bay. We are given the background of each of Stone’s three patients. Joseph (Peter Dinklage) suffered physical and mental abuse as a child and presents himself as a cultured Englishman (who happens to be Jesus Christ). Leon (Walton Goggins) is the son of an abusive religious fanatic (Nancy Robinette) who becomes sexually focused on Stone’s assistant Becky (Charlotte Hope). Clyde (Bradley Whitford), who lost his wife in a botched abortion, believes he smells like sulphur and communicates with ad jingles.

Stone believes bringing these men together and forcing them to confront the impossibility of their all being the same man while listening to them will effect change. While he eventually gets the three to interact on a friendly basis, he does not cure any of their delusions. Meanwhile he must deal with Orbus and Dr. Francisco (Julian Acosta), always at the ready to deliver shock treatment. Their interference will have tragic results, but it will be Stone who is put on the defense.

We've seen this performance from Gere before, compassionate but no stretch for the actor. Dinklage, Goggins and Whitford get the flashiest parts, but it is British actress Charlotte Hope, in her first screen role as Stone’s assistant with her own troubling past, and Kevin Pollack as the weasely Dr. Orbus, who are the most intriguing here. Julianna Margulies plays Stone’s wife who walks into what appears to be a compromising situation that is left dangling and who is later accused by her husband of having an alcohol problem which is not evident before or after, the issue dropped entirely. Jane Alexander makes a last act appearance as arbiter Dr. Abraham.

“Three Christs” presents a worthy subject and has its moments, but it is too narratively haphazard to build to a strong conclusion.

Director Jon Avnet and his team of co-writers adapt the book, Three Christs of Ypsilanti by Milton Rokeach, who made the original psychiatric study from 1959-61. The filmmakers loosely keep to the facts of the study – there were, indeed, three delusional schizophrenic patients who each believed themselves to be Christ the Savior. The doctor, using non-destructive methods of treatment, was allowed to isolate and treat Joseph (Peter Dinklage), Leon (Walton Goggins) and Clyde (Bradley Whitford). Oddly, while the patients’ real names are used, the doctor’s is changed for the film.

“Three Christs” was actually released two years ago but did not get distribution until now. I think the filmmakers were hoping for a “One Flew Over the Cuckoo’s Nest” dynamic but this is not that kind of movie. The execution of the true life story is far less dynamic than the latter film and, aside from a few minor tense moments, the story is more about the psychiatric study than a rebellion of inmates.

Each of the characters exhibit unique personalities but, with Christ as the prominent player, the actors tend to chew scenery as they put their own spin on their Christ figure. The intent of the study was to show these delusional patients that each could not possibly be Christ. (The study was only a limited success since each Christ was sure the others were false Messiahs and he the one true savior.

This is an interesting look into a real mental health study that tried to break new ground in psychiatric treatment that were meant to cure, not just subdue and vegetate, the subject. Unfortunately, the draw to the film is the individual performances by the titular characters as the doctor tries to cure them. It was unchartered territory for a psychiatric study into the minds of some forlornly troubled people and the doctor who thought he could help.