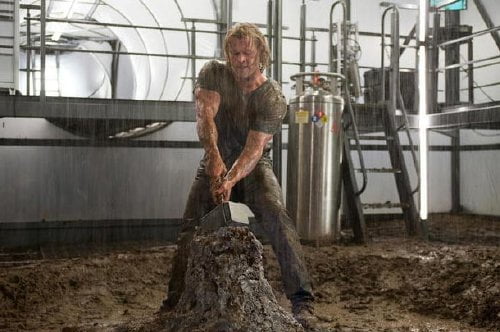 In the mighty realm of Asgard, just as King Odin (Anthony Hopkins) is about to anoint his son king, old enemies from the frozen realm of Jotunheim breach their weapons room. The mighty prince is enraged and against his father's order, secretly attacks, reigniting a war. With great sorrow, Odin banishes his son and his mighty hammer Mjolnir, to the lower realm of Midgard, also known as Earth. There in a desert in New Mexico, astrophysicist Jane Foster (Natalie Portman, "Black Swan"), studying strange weather phenomena in the night skies, will find a strange, massive blond specimen in the midst of one - "Thor."

Who would have thought that Shakespearean actor/director Kenneth Branagh, who hasn't made a film since 2007's tepid "Sleuth" remake, would turn out to be just the right guy for a Marvel Comics tentpole? Then one considers the similarities - legendary Norse gods vs. royalty, universal themes of fathers and sons and the political machinations around the throne which turn family members traitorous - and he seems just right. Solid storytelling, production design that reflects comic book roots, a hugely charismatic lead in Aussie Chris Hemsworth ("Star Trek") and Sir Anthony Hopkins suppressing his inner ham to deliver a real performance all add up to make "Thor" a winner. Screenwriters Ashley Edward Miller & Zack Stentz ("Agent Cody Banks") and Don Payne ("Fantastic 4: Rise of the Silver Surfer") using a story by J. Michael Straczynski (TV's 'Babylon 5') and Mark Protosevich ("I Am Legend") adapted from the 1962 Stan Lee/Jack Kirby comic begin with Jane, her mentor Dr. Erik Selvig (Portman's "Goya's Ghosts" costar Stellan Skarsgård) and intern Darcy Lewis (Kat Dennings, "Nick and Norah's Infinite Playlist") chasing a weather system and unwittingly hitting a man with their SUV, before jumping back to 952 A.D. Norway to give birth to the Viking legend. This provides background for the flashback to Asgard and the explanation as to why Thor is in New Mexico and just what those weather systems are. It must be admitted that Asgard, with all its golden domes and golden domed thrones, is a bit cheesy looking and that the CGI crowds gathered for Thor's ascension are decidedly unconvincing, but in an odd way, that's part of the film's charm in a 1980's "Flash Gordon" kind of way. When Thor, accompanied by his magician brother Loki (Alan Cumming lookalike Tom Hiddleston, HBO's 'The Gathering Storm') and his loyal warriors Volstagg (Ray Stevenson, "The Other Guys"), Hogun (Tadanobu Asano, "Ichi the Killer," "Café Lumière"), Fandral (Josh Dallas, "The Descent: Part 2") and the female Sif (Jaimie Alexander), arrives in Jotunheim, we're reminded of rocky outcrops of 'Star Trek' - the television series - until the immense King Laufey (Colm Feore, "Changeling") and his frost giants begin battle. Thor and his band do surprisingly well at first, but in the end must retreat for Thor to face his banishment. On earth, things are less dire, more comical, as the tiny Jane gapes at the blond god (yes, he takes his shirt off and it's all Hemsworth), who has battled his way out of the ER they brought him to in the quaint town of Puente Antiguo. Townies are buzzing about the alien object embedded in a boulder in the center of a crater outside of town and Thor wants to retrieve the hammer that caused 'Stan the Man' (Lee) to lose his truck bed. But SHIELD, led by Agent Coulson (Clark Gregg, "Iron Man," connective tissue to 2012's "The Avengers"), has descended, stripped Jane of her research and equipment, and built a security zone around Mjolnir. Still, assisted by Jane, Thor gets within reach, only to realize just what Odin's words, 'Whosoever holds this hammer, if he be worthy, shall possess the power of Thor,' meant. Back home, Loki, having discovered a family secret, continues his master manipulation and Odin lies in coma. Loki sends the Destroyer, a nine foot metal robot/flamethrower, to level the small town where his brother is stranded. "Thor" is a great hybrid of a film that should please even those, like myself, who aren't particularly into the super hero genre. Here we have a comedic fish-out-of-water tale, a romance, a sci-fi fantasy, fictional palace drama, action and a coming of age story. All in the cast are good, but some stand out beginning with Hemsworth who handles every element with aplomb, all while looking like a god into the bargain. A star may be born. And here was the perfect opportunity for Hopkins to chew scenery and yet he makes Odin into a wise king with complex relationships with two sons. Thor's warrior team don't really stand out except for a little humor from Stevenson, but as Asgard’s gatekeeper, Heimdall, a special effects-enhanced Idris Elba (HBO's 'The Wire,' "The Losers") is impressive, giving cunning and depth to the formidable guard. It's nice to see Rene Russo ("Get Shorty") back on the big screen, but as Odin's queen Frigga she's merely window dressing. Portman is cute, believable both as brainy and blushing, while Skarsgård provides a nice link to Thor's Nordic roots (and has a great scene with Hemsworth in a bar). Dennings is quirky, but the humorously barbed relationship between Jane and her intern is woven of thin air. Like "Iron Man" before it, "Thor" throws the surprise summer opening gauntlet, and with "The Green Lantern" and "Captain America" on the schedule, Marvel looks to trump DC Comics this year. Be advised, though, that "Thor" has undergone yet another 3D conversion which doesn't justify the ticket uptick - it doesn't look bad, like "Clash of the Titans" did, merely unnecessary.

Thor (Chris Hemsworth) is the son of powerful king Odin (Anthony Hopkins), ruler of Asgard, The kingdom has been in a life and death struggle with the evil Frost Giants, the frigid inhabitants of another world. The prince defies his father’s order and leads a team of warriors to take the fight to the giants. For his defiance, he is banished to the Earth without his famous hammer, Mjolnir, and must learn humility, obedience and honor to return to the home world of “Thor.” I am not a superhero comic book fan so, aside some sketchy understanding of Norse mythology and reading the comic books decades ago (I always preferred Marvel’s Nick Fury and the Howling Commando series to their superhero mags), I was pretty open minded walking in to see “Thor.” The house was packed and everyone seemed pumped up to have a good time. They get it here in spades. “Thor” has a ready made and large audience in the comic book and superhero loving crowd. It also has strong appeal to a much broader audience base that likes action, adventure, myth, bad guys and battles. This is due to a strong, agile cast, flashy CGI (and unnecessary 3D) and a rousing good story. The cast is led by Chris Hemsworth as the titular Thor and the actor, from his first moments on the screen, steals the show with charisma, roguish good looks and a likability quotient that is off the charts. Hemsworth is foremost of the many reasons to see “Thor” and is worth the admission price alone. The other qualities mentioned are icing on the cake and make this more than a superhero actioner. The story is based on the popular Marvel comic book character but the screenplay, by Ashley Miller, Zack Stentz and Don Payne, follows its own path. You do not have to be a comic book fan to enjoy the exciting tale about gods and man and the battle between good and evil. This is the kind of movie that could have cast second tier actors and still be a fun flick. However, director Kenneth Branagh, back behind the camera after a four year hiatus, has a top notch cast in front of the camera, including two Academy Award winners, Anthony Hopkins as the lordly and noble Odin and Natalie Portman as Earth scientist Jane Foster. These two stars, along with hunky Hemsworth, are joined by a solid supporting cast with Skellan Skarsgard as Jane’s colleague Eric, who is the authority on Nordic legend and helps explain the mythology. Tom Hiddleston, as Thor’s ambitious stepbrother and soon-to-be archenemy Loki, gives a good arc to his character as both his terrible secret and sinister plan are unveiled. The rest – Colm Feore, Idris Elba, Kat Dennings, Clark Greg and Ray Stevenson included – do a fine job filling out the supporting characters. Renee Russo, as Odin’s wife, Queen Frigga, is underused to such a degree that she almost fades into the scenery, Techs are good with flashy CGI dominating the action. The post-production 3D effects are not up to the rest of the production, where the visuals are effective and exciting. The melding of “real life,” when Thor is cast to Earth, and the fantastical worlds of Asgard and the Frost Giant planet gives the film variety in scenery and mood. The other world costuming harkens to the Norse myths with huge helmets, golden armor and powerful weapons in abundance. Sadly, for audiences, “Thor” is being released in 3D and filmgoers will pay a surcharge for the “privilege.” Because the effect is done in post-production and not with 3D cameras, it looks less than pristine compared to films done properly. “Thor” does not need 3D and should, at least, be made available in 2D.