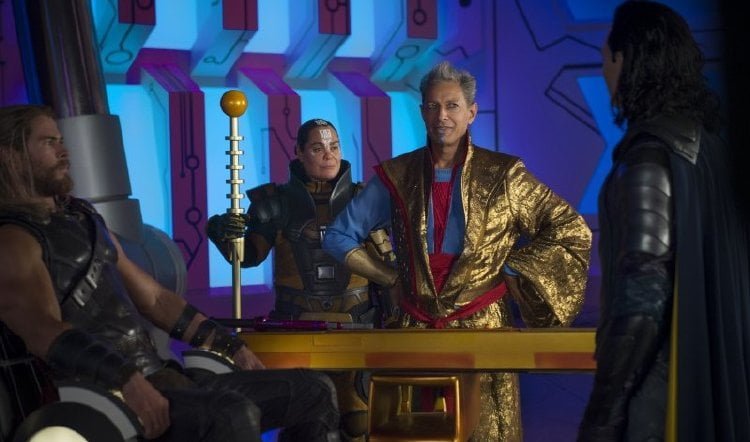 After ensuring fire demon Surtur's imprisonment, Thor returns to Asgard and finds his brother Loki (Tom Hiddleston) impersonating their father, Odin (Anthony Hopkins). The two find Odin on Earth, but the King is nearing death and warns of the rise of their older sister. Hela (Cate Blanchett) arises to declare herself Asgard's rightful Queen, proving herself the most powerful creature in the Nine Realms by shattering Thor's hammer. Adding insult to injury, Thor is picked up by Scrapper 142 (Tessa Thompson, "Creed"), who brings him to the Grandmaster's (Jeff Goldblum) junk planet of Sakar, where he is forced to become a gladiator and fight its champion, none other than The Hulk (Mark Ruffalo) in "Thor: Ragnarok."

If you're wondering what Ragnarok is, it's Sutur's prime objective, meaning 'end of days' in Norse mythology. The choice of New Zealand director Taika Waititi ("What We Do in the Shadows") has created a lot of excitement for the latest installment, and while it is fun, one cannot help but feel that Marvel television writers Eric Pearson, Craig Kyle and Christopher Yost don't bring enough wit to the proceedings. Marvel's "Avengers" franchise derives its humor from its Superhero bickering and there's plenty of that to go around (Thor and Loki, Thor and The Hulk, Thor and the Scavenger revealed as an Asgardian Valkyrie), but the film's funniest element is Waititi's accent emanating from his CGI rock monster Korg (voice of director Waititi). Speaking of rocks, Waititi envisioned the film as a rock space opera and that it is, its opening and closing scenes set to Led Zepplin's 'The Immigrant Song,' memorably used in David Fincher's "The Girl with the Dragon Tattoo." The film's main set piece is that battle between Thor and a Hulk who hasn't been Banner in two years, an uneven matchup exacerbated by Grandmaster's favoritism and his ability to control Thor by the metal disk implanted in his neck. It's up to Thor, his hair shorn (by Stan Lee) for the arena match, to talk The Hulk down and plan an escape to save Asgard from Hela with unlikely help from Loki and the reluctant Valkyrie who witnessed Hela's massacre of her kind. Back on Asgard, Hela's slaying all who fail to submit, anointing Skurge (Karl Urban) her executioner and raising her army from the dead as Heimdall (Idris Elba) shepherds Asgard's citizens to a secret mountain chamber. While it is visually interesting to watch Blanchett's makeup morph from her Goth look to someone who looks like "Snow White's" Maleficient with antlers and back, the screenwriters give her little motivation for destroying what she's set out to rule. Special effects include a towering, staticky Grandmaster hologram and lots of profiles of warriors suspended in air. Sakar's scrap heap set design is a missed opportunity for visual gags. Original music by Devo's Mark Mothersbaugh reflects the film's goofy tone. Those who stay for the end credits are treated to two stingers. "Thor: Ragnarok" leaves us with its Avenger very different from the God of Thunder we first met, rebooting the franchise for a fresh start. Let's hope Loki remains within the fold, Hiddleston the series' MVP. Grade: