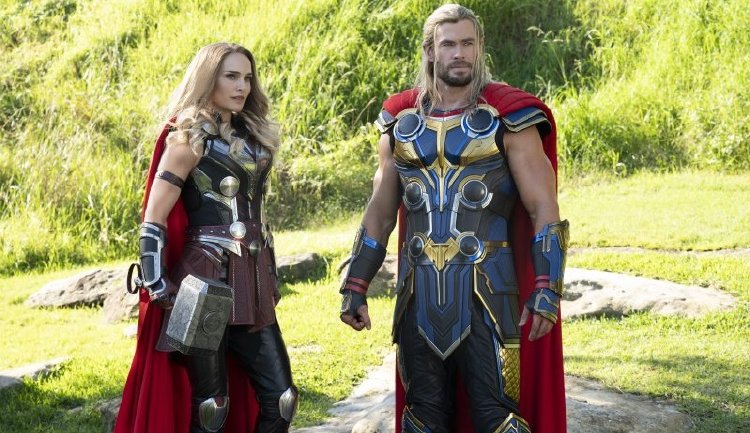 When Gorr (Christian Bale) loses faith in his god after his daughter dies in a barren, waterless wasteland, he becomes the God Butcher, vowing to slaughter them all. When he rains terror down upon New Asgard in the form of spider-like monsters, a back-in-shape Thor (Chris Hemsworth) arrives, pleased to find himself fighting alongside old allies Korg (voice of Taika Waititi), Sif (Jamie Alexander) and King Valkyrie (Tessa Thompson), but when he spies his beloved Mjolnir, the old hammer hovers, but returns to the newly minted Mighty Thor, his ex Jane Foster (Natalie Portman), in “Thor: Love and Thunder.”

Cowriter (with Jennifer Kaytin Robinson)/director Taika Waititi returns after his comedic stylings made "Thor: Ragnarok" one of the more entertaining of the MCU filmography, but while there are several high points in this follow-up, most notably Russell Crowe’s take on Zeus, a lot of this film’s jokes, like Jane’s quest for a catchphrase, fall flat.  There are serious matters in “Love and Thunder” involving endangered children and love, both of which will define Thor moving forward, but as far as Avengers go, this outing makes little if any progression.

When we last saw Thor, he gave his title to Valkyrie and left to tool around with the Guardians, who make a brief appearance here fighting alongside the Norse god, who is gifted a pair of giant screaming goats, Toothgnasher and Toothgrinder, for his services.  It is highly amusing to see New Asgard transformed into a tourist attraction, complete with a flying Viking ship and the Asgard players on stage (Matt Damon and Luke Hemsworth return, along with Melissa McCarthy as Hela), but it quickly descends into chaos, its resident children kidnapped by Gorr (Bale, resembling Marilyn Manson crossed with Voldemort).  Using astral projection, Thor locates the children, led by Heimdall’s (Idris Elba) son Axl (Kieron L. Dyer), in the Shadow Realm, and wielding his axe Stormbreaker, which continuously expresses its jealousy of Mjolnir, sets off on that ship pulled by his goats with Jane, Valkyrie and Korg to defeat Gorr and his Necro Sword.

Their first stop, Omnipotence City, where they hope to convince Zeus (Russell Crowe, looking like Burt Lahr's Cowardly Lion wearing a tutu beneath a “Gladiator” style breastplate) to supply them with an army, is the film’s shining highlight, Crowe, speaking with an affected Greek accent, sending himself up with unconstrained glee.  When he demands the disguised Thor hit the center stage to address him, Zeus strips him of his disguise, giving us a view of Hemsworth’s naked backside and sending his Zeusettes into a mass fainting spell.  After this, Waititi is content to mostly go through the motions.

The reason behind Jane’s having secured the loyalty of Mjolnir casts a pall over the film as Thor finds his way back to opening his heart (cue the domestic flashback montage).  But while Hemsworth finds just the right balance to strike between humor and puffed up heroism, Portman seems incapable of comedy.  Thompson maintains an air of gravitas, yet injects sly humor into her paring with Korg, especially after he’s reduced to a pile of rubble, his face strapped onto her back (it’s surprising this film wasn’t released during Pride month, given its lesbian Valkyrie and new information about Korg’s parentage).  Action scenes are juiced with the screaming of goats and a heavy metal soundtrack largely dependent on Guns N’ Roses, with a hit of Abba for Nordic whimsy.  Injecting the kids into the climactic showdown helps alleviate the usual Marvel climax bloat.

“Thor: Love and Thunder” is an amusing trifle that serves to realign Thor for future appearances.

Gorr the God Butcher (Christian Bale) declares, “The only ones who gods care about are themselves. So this is my vow: all gods will die.” Meanwhile, Thor (Chris Hemsworth) must come out of retirement to fight this new and deadly nemesis. He enlists the help of King Valkyrie (Tessa Thompson), Korg (Taika Waititi) and Dr. Jane Foster (Natalie Portman), the new Mighty Thor, hammer and all, in “Thor: Love and Thunder.”

Not being a fan of Thor and the Avengers et al, it is hard for me to actually “review” a MCU movie because I do not care anymore. Actually, I got bored with the franchise after the very first “Thor” back in 2011 and have not really paid attention since. It seems like every addition to the MCU is just more of the same – battle bad guys, banter, and repeat.

I went into “Thor: Love and Thunder” more open minded than usual, probably because of COVID and I have mellowed somewhat. I sat down to watch and had a few surprises in store (for me). For one thing, it is just under 2 hours long – I tend to expect longer for an MCU movie. For another, there was not the obligatory 20-minutes of bombast and noise that most Marvel movies do in the finale. And, there is the love story between Thor and Jane – who, somehow, became Thor the Mighty and the master of the hammer Mjolnir.

Actually, there are two movies in one in “Thor: Love and Thunder.” The expected one has Thor, the Guardians of the Galaxy and all others good guys join to battle Gorr. There is a lot of flash, bang and clever banter among the players but it is all pretty routine. The other movie is about Jane Foster and her battle with cancer, Thor and their eternal love for each other against all odds.

So, as a non-fan, I found it entertaining, funny and a little bit somber. Would I watch it again? No, thanks. Am I going to talk to the fans and find out what they think? Absolutely!

Disney/Marvel releases "Thor: Love and Thunder" in theaters on 7/8/22.