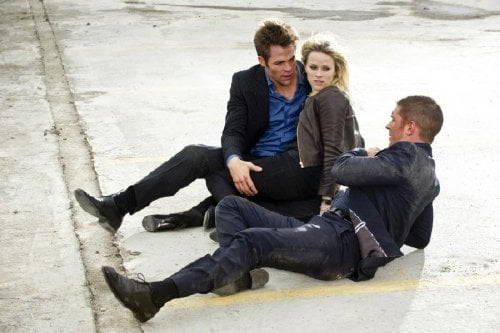 When Lauren Scott's (Reese Witherspoon) best friend Trish (Chelsea Handler) makes an outrageous profile for her on a dating site, she's incensed...until, that is, she sees a picture of Tuck (Tom Hardy, "Inception," "Warrior"). After a great coffee date, she runs into FDR (Chris Pine, "Star Trek," "Unstoppable") at the video store and finds his pickup lines offensive. What she doesn't know is that the two men are best friends. They're also C.I.A. operatives and when they discover they're both interested in the same woman, "This Means War."

As directed by anti-stylist McG ("Charlie's Angels," "Terminator Salvation"), "This Means War" starts off really badly then upticks slightly due to the great chemistry between...Chris Pine and Tom Hardy. There are also some laughs to be had from Chelsea Handler in the 'funny best friend' role, until you begin to think about the plot and the whole thing gets kind of icky. Note that what follows may infer spoilers. The two-guys-betting-on-the-same-girl thing has been done before, but here the setup is unusually contrived as the best friends agree that they won't harm their friendship nor attempt to sleep with the object of their desire. Another problem is that the likability deck is stacked against FDR because he has no trouble picking up women while Tuck does. But FDR continues to pursue Lauren even though Tuck's had a promising start to a relationship while he's been rebuffed, leaving the male ego as his only logical motivation. And yet there are two screenwriting cliches of the romantic comedy triangle that are immediate tip offs as to who will win Lauren's hand that suggest things will take the unwanted path. The resolution to the love triangle is unsatisfying for a number of reasons, not least of which is the empty catalyst for the jilted lover to be paired off. The only real pleasure to be found in the film is in individual set pieces of dating oneupmanship. Even these are tainted with implausibilities like a C.I.A. operative's ability to gather original works by Gustav Klimpt or the obviousness intentional sabotage that would cause a room to be flooded with water. Surely the latter would cause Lauren to question just what's going on? But no, as written by Timothy Dowling ("Just Go with It") and Simon Kinberg (2009's "Sherlock Holmes") hit the gag-ruining date and move on before anyone notices. The film's prologue pitting Tuck and FDR against bad guy Heinrich (Til Schweiger, "Inglourious Basterds") in a penthouse with a helipad features an entirely unconvincing set and cinematographer Russell Carpenter ("Titanic") expends a lot of energy accentuating the blueness of the three stars' eyes while overlighting everything else. It's just plain depressing to see Oscar nominee Angela Bassett ("Jumping the Broom") cast in a tiny role as the guys' scolding superior. "This Means War" offers a few laughs but what strings them together is a tale chock full of betrayals and stalking. The entire concept is based on a tasteless premise that leaves no one looking particularly good.