This Is the End 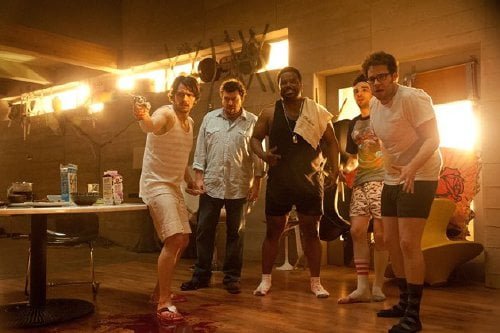 Jay Baruchel jets into L.A. from Canada to spend some quality time smoking weed and playing video games with his best buddy Seth Rogen. He's none too happy when Seth wants him to go to a party at James Franco's flashy new house. Jay doesn't like Seth's 'new' friends, particularly Jonah Hill, but he agrees to make the effort. Franco's celebrity-studded party comes to an explosive halt when it becomes ground zero for Armageddon, and not the Michael Bay kind. Jay finds himself boarded in with Seth, Jonah, James and Craig Robinson fearing "This Is the End."

Writers Seth Rogen & Evan Goldberg ("Pineapple Express," "The Green Hornet") make their directorial debuts with this sporadically funny, self-indulgent, slapdash comedy which is more like wrap party reels for the stars than a movie for a paying audience. There's some fun to be had with these comedic actors taking the piss out of themselves in exaggerations of their real life personas, but the conceit begins to wear very thin once the premise has been set. If you like dick jokes, urine jokes, the "Scary Movie" series and Danny McBride turning his usual brand of sociopathic humor up to 11, this might be the movie for you. With most of their guests, including David Krumholtz, Christopher Mintz-Plasse, Rhianna and, most spectacularly, MVP Michael Cera, having been swallowed in a giant sinkhole, the lads find themselves cut off from communication and utilities. Using Franco's artwork (amateurish paintings extolling his film career and obsession with Rogen), they board the place up, inventory supplies and claim private sleeping spaces. Jay finds his overly popular. Things get worse the next day when they discover Danny McBride, uninvited to Franco's party, feasting on most of what they had left. Jay is convinced they're experiencing events as described in Revelations, having seen people 'Raptured,' just before a stranger, attempting to gain entry, has his head lopped off into their living room by some unseen beast outside. After the hubbub dies down, the boys get bored and amuse themselves by making a home vid sequel to "Pineapple Express." If only they'd continued 'Sweding' their own films. Instead Hill gets an evening visit from a horned and visibly horny demon which changes him for the worse. McBride's wasted their water, so its procurement becomes their next mission. Eventually Jay's proven right when one of them makes a sacrifice for the others and is called up into the clouds. "This Is the End" is very reminiscent of last year's awful "The Watch" without studio quality effects (its cheesy look is probably intended to be funny, but it just looks like special effects that could be outdone on a neophyte's home computer). A far funnier effect is achieved costuming Franco in shorts and shower sandals. Emma Watson returns from an early cameo for her own subplot that's essentially an extended rape 'joke.' A late cameo, somewhat expected as it's been set up earlier, is amusing for about 2 seconds. The film's conclusion relies on the presence of a 90's boy band for laughs. If you take the time to think about it, which I unfortunately must, there are some amusing, albeit ever so slight, messages being sent. Canadians rule, expats can be saved but those who've given in to the L.A. lifestyle are doomed to horrible fates. In fact one, whose sexuality has been questioned, has a very "Suddenly, Last Summer" style demise. And the Black guy lives too. Michael Cera's coked out stud is insanely fun, but he's gone too soon and most of the comedy goes with him.