This Is Not a Film 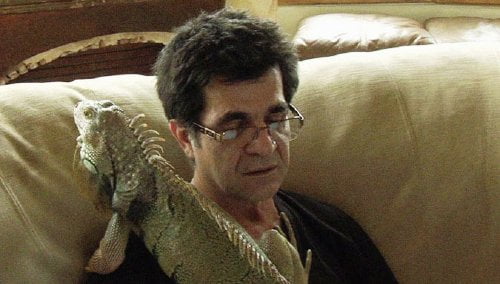 Acclaimed Iranian New Wave director Jafar Panahi was arrested in 2009, while making his last film, on charges of “assembly and colluding with the intention to commit crimes against the country’s national security and propaganda against the Islamic Republic”. He was sentenced, in 2010, to six years in prison and a 20-year ban on directing films, writing screenplays, giving interviews and leaving the country. As he awaits the results of his appeal, he enlisted his colleague Mojtaba Mirtahmasb to help to create a documentary but claims “This Is Not a Film.”

While awaiting an appeal on his sentence of twenty years' ban from writing and directing films plus six years in prison for having participated in anti-government demonstrations, Iranian writer/director Jafar Panahi ("The White Balloon," "The Circle") cannot suppress his urge to create and so calls his friend, documentarian Mojtaba Mirtahmasb (also now under arrest), to come to his home where he has figured out a way to circumvent the law with "This Is Not a Film." Jafar Panahi is eating breakfast when he gets a call from his lawyer giving him her latest prediction on his appeal. He's in the bathroom when his wife calls, telling him to get out of the bed we see, rumpled, before Panahi steps into the room. He thinks these early scenes are 'a lie,' and wonders how to correct them. He reasons that although he's been banned from writing or directing, giving any interviews or leaving his country, that he has not been told not to act or read and can, therefore, act out the screenplay which he had written but not gotten approval to shoot. But "This Is Not a Film" never settles down - it's as restless as its house arrested protagonist and a compelling and often humorous look at a day in the life of an auteur with his wings clipped. We see Panahi tape out the location of his heroine's house, show his location footage and even act out a scene or two, but he's chided by Mirtahmasb for saying 'cut' when he cannot direct. He moves on to discuss another unapproved screenplay, but he cannot act out the last day of the Iran/Iraq war in his living room. He moves on, searching for scenes in "The Mirror," "The Circle" and "Crimson Gold" which illustrate how direction is often out of his hands - in the earliest when his child actress refuses to cooperate, in the last when his non professional lead does something unexpected. He claims the middle scene is directed by its location, a tougher argument to put over when he has presumably chosen it for the very qualities he says it gives the scene. Panahi does many other things besides delve into his cinematic past though. He's been instructed by his wife to feed Igi, their pet lizard (and charismatic costar), and water the balcony flowers where a crane erecting a new building which clearly obstructs a view once had is a metaphor for the silencing of his artistic vision. A neighbor tries to leave her barking dog Mickey to partake in election day fireworks, but Mickey gets the heave-ho for upsetting Igi. The director works his laptop as Igi sinks his nails in, but complains of too many Internet blockages. Later he sees footage of Japan's tsunami on his flat screen, some of the world still seeping through. All this is a lot more entertaining that it might sound, but the film ends on a particularly high note. Panahi pulls out his phone and begins to shoot Mirtahmasb as his friend shoots him. Mojtaba says that when hairdressers are bored, they cut each others hair. Cigarettes and a lighter become a tripod before the documentarian says he must be going, opening the door for an art university student, covering for his cousin, the building custodian. Jafar accompanies him on his rounds, collecting garbage (Mickey's owner strikes again), until they hit the gated ground floor. The student warns 'Mr. Panahi' not to follow him out as 'they might see your camera,' but Panahi's already captured the eerie site of his ornate gates backlit by roaring fires from the street, a picture of the political upheaval which has jailed him. "This Is Not a Film" is a terrific portrait of the creative spirit. It's been dedicated to Iranian filmmakers. Most of the credits consist of a series of dots, a reverse blacklist. (The film was smuggled out of the country on a thumb drive hidden inside of a cake and premiered at the Cannes Film Festival.)

When you take a creative mind like Jafar Panahi’s, whose landmark films include “The White Balloon,” “The Circle” and “Crimson Gold,” and ban him from doing the thing he loves – filmmaking – there is bound to be rebellion at hand. For Panahi, closely watched by the Iranian authorities, he takes a different tack to get around the imposed restriction – if he cannot make a film, he can tell a film. The filmmaker enlisted a colleague Mirtahmasb to film Panahi telling the story from his last film that earned him his prison term and 20-year ban. The letter of the law does not allow Panahi to direct or write films but does not prohibit him from reading and acting a screenplay. This loophole allows the filmmaker to be the subject, not the maker, of a documentary. He expresses his anger and frustration at the banning to the camera and, always the filmmaker, tries to direct himself. (Mirtahmasb stops Panahi, telling him that he is breaking the law.) Things we take for granted, like internet access, getting together with friends and going out to eat, are restricted for Panahi. Between his professional banning from doing the work he loves and the personal restriction imposed because of the ban, plus the urban strife and violence that grip Tehran, Panahi creates a very personal film that reveals the inner man. His pet iguana, Igi, is pretty cool, too.